Brandon Davis has dreams and a plan to reach them.  He is working non-stop on his game with the crew at 302 BJJ where head trainer, Steve McCabe, tightens up his striking with his own little twists on Muay-Thai as well as his transition game on the ground.

The 302 BJJ Fight Team is growing more and more every day and they have become staples at most regional MMA and kickboxing/Muay-Thai events.

Lisa Lynn and Andre Petroski have been tearing it up recently, and Davis is right on their tails. Brandon brings his impressive 6-1 record to the cage to battle for the Art of War 125 lb championship at AOW 6, on March 10 at the Lanco Fieldhouse.

His opponent is Miguel Diaz (3-2) who is coming off a win by rear naked choke at LOTC. Brandon has put together 5 consecutive wins and says he is not planning on slowing down any time soon.

“This fight is a statement of what’s to come!” the high-energy, well-conditioned Davis tells me.  He’s been working his strength and conditioning with Eddie Hall at his Hall of Fame Personal Training and is getting more explosive every day.

Check out my full interview below with the blue-chip prospect. His name is one that you will be hearing more of in the very near future.

MyMMANews will be on hand for commentary, results, photos, and a full recap.

LISTEN TO BRANDON DAVIS BELOW: 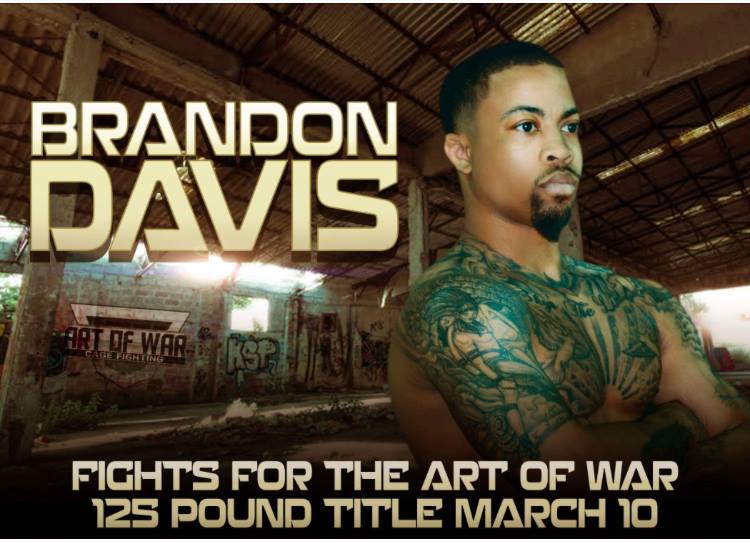