Brendan Loughnane is aiming to be the first person to beat Movlid Khaybulaev, at PFL 7 on Aug. 13.

He will actually be the second to stop Khaybulaev according to Loughnane [21-3]. The Russian suffered a first-round TKO loss to now-UFC fighter Daniel Pineda back in October 2019, but the bout was overturned to a no contest after Pineda tested positive for a banned substance.

Loughnane is predicting a finish against Khaybulaev inside the Seminole Hard Rock Hotel and Casino in Hollywood, Florida. He expects the victory to stick.

“He’s there to be finished, he’s been finished before on the feet even though he’s 17-0-1,” Loughnane said.

“I can see myself getting a finish on the feet.”

The 31-year-old is confident Khaybulaev will shoot for a takedown. Loughnane is a proven striker with 11 of his 21 victories coming by TKO/knockout.

He kicked off this PFL season by knocking out Sheymon Moraes with a brutal right hand in round one last April.

Khaybulaev is a wrestler from Dagestan. He rattled off two unanimous decision wins inside the PFL cage this year, including a victory over two-time PFL champions Lance Palmer in June.

Loughnane says there’s no mystery to what Khaybulaev’s game plan will be.

“He’s going to be shooting for the fences like they all are,” Loughnane said. “They can all say they want striking, but we’ll see how long it takes till he starts shooting for my legs.” 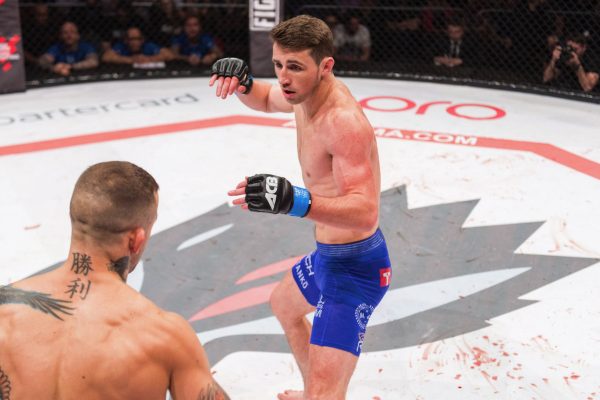 Loughnane is perfect inside the PFL cage with four-consecutive wins. The Manchester, England native is currently on a seven-fight win streak, including a unanimous decision win over UFC featherweight Bill Algeo on Dana White’s Contender Series in June 2019.

His last defeat came against Pat Healy via split decision in July 2017. Loughnane is still unconvinced he lost that fight.

“I didn’t even lose that fight, I’ve always been this good, just never had the opportunity,” Loughnane said “I’ve had some unfortunate turns in my career, but I think this year it’s all going to come to fruition and I’ll get what I deserve.”

Loughnane is currently the man to beat, ranking first on the PFL featherweight leaderboard with nine points. He’s coming off a majority-decision victory against Tyler Diamond at PFL 4 in June.

Numbers are key in the PFL as only the top four advance to the playoffs. Khaybulaev is in position to qualify since he is pegged at No. 4. Loughnane and Khaybulaev are two of four featherweight still unbeaten at 2-0 this season.

Loughnane will attempt to stay on top of the table by putting away Khaybulaev for the first time.

“Being the No. 1 seed, it’s amazing,” Loughnane said. “I wasn’t the favorite coming into it, but people are finally waking up and believing I can win it now. I knew all along what could happen.”