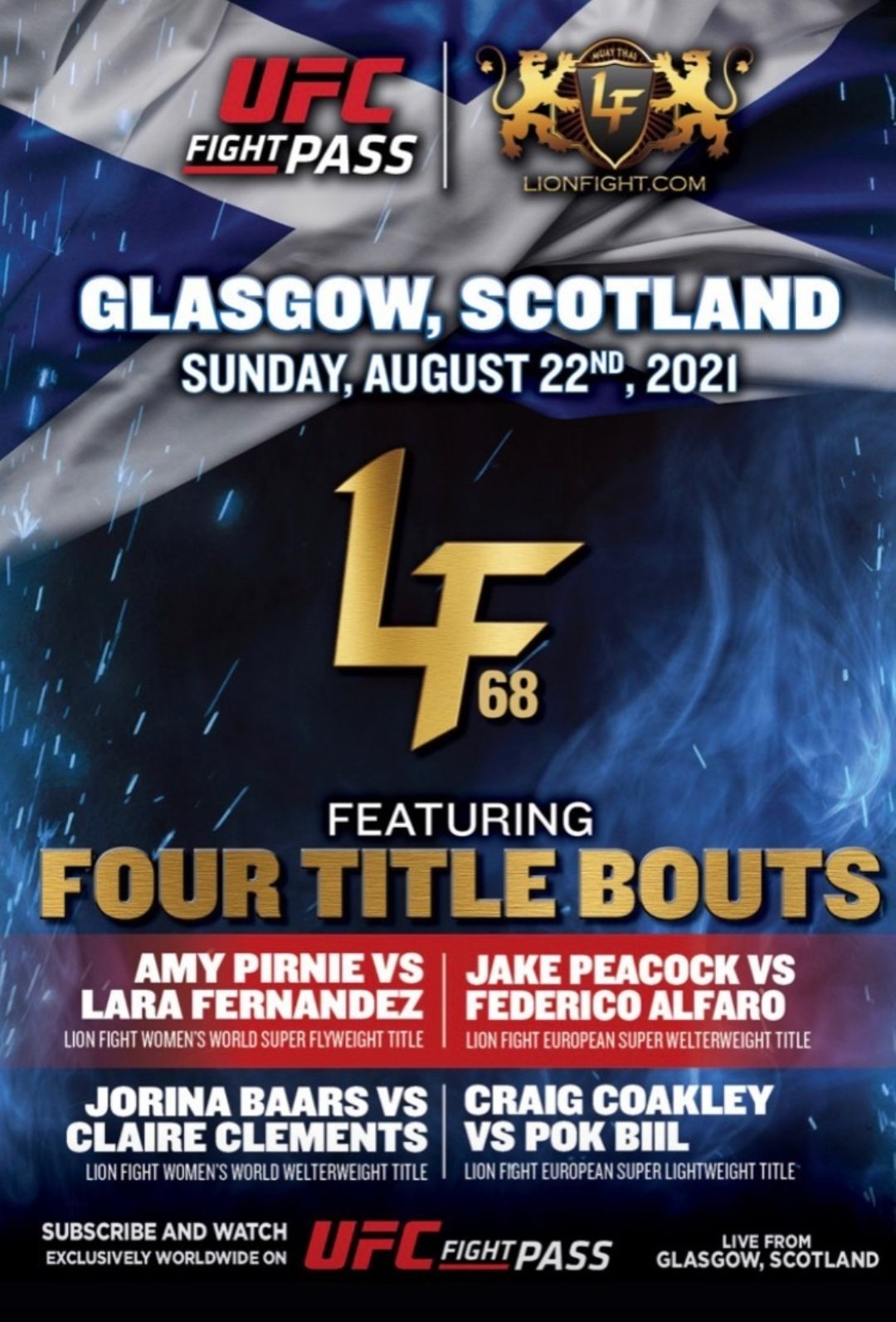 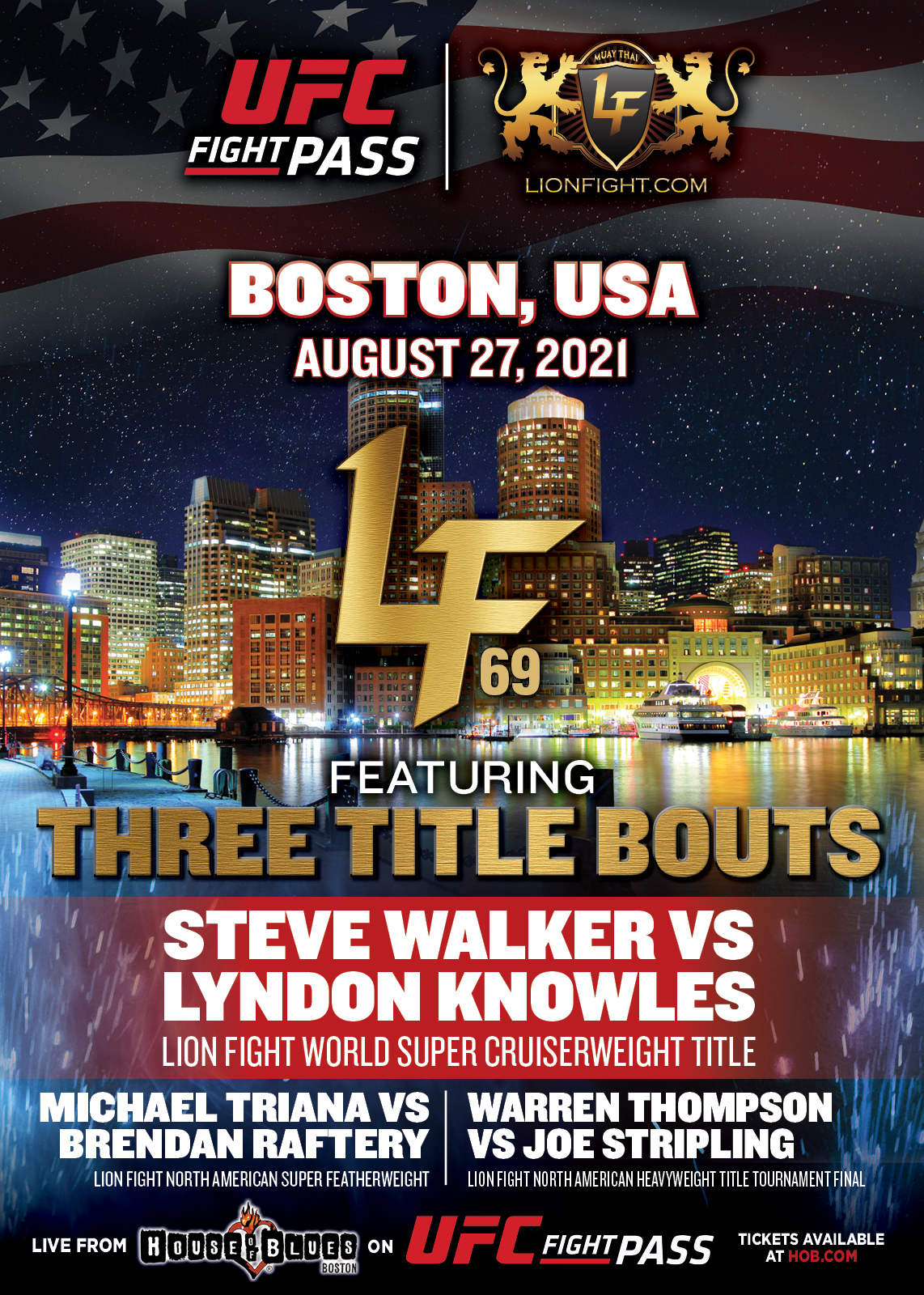 It is undoubtedly one of the biggest moments in the history of LION FIGHT.

A historical week will see LION FIGHT host a pair of events on two continents with a total of seven championship bouts all airing exclusively on UFC FIGHT PASS, the world’s leading streaming service for combat sports. Lion Fight 68 is set for Sunday, August 22 at the SWG3 Studio in Glasgow, Scotland, featuring two women’s world championship bouts, including Glasgow’s own superstar Amy Pirnie, and the first-ever Lion Fight European title fight. Just six days later, Lion Fight 69 will take place on Friday, August 27 at the world-renown House of Blues across the street from famed Fenway Park in Boston, Massachusetts, USA. That event will be topped by Boston’s own Lion Fight champion Steve “Put ’Em To Sleep” Walker defending his World Super Cruiserweight title.

“We are extremely excited to be bringing Lion Fight to two spectacular cities like Glasgow and Boston, and of course, bringing an all-star lineup of fighters to showcase our brand of Muay Thai,” said Lion Fight CEO Scott Kent. “Having the opportunity to do home-town World title fights for Amy and Steve is truly amazing, and we are so looking forward to seeing them in action in front of their fans.

“These international events show how far Lion Fight has come, and how much of a global reach we can have in the future thanks to our partnership with UFC Fight Pass.”

LION FIGHT will now be showcasing three events in just 28 days in three different countries as these two newly announced cards follow on the heels of Lion Fight 67 set for Saturday, July 31 in Sicily, Italy. At the top of Lion Fight 67 are two other title fights as World Light Heavyweight champion Enrico Carrara defends the crown in his own hometown against Patrik Vidakovics, and undefeated World Cruiserweight champ Chip Moraza-Pollard puts his belt on the line against Jakub Benko.

LION FIGHT’s inaugural venture into Glasgow, Scotland, will see one of the most stacked cards in company history.

In the main event, Lion Fight Women’s World Super Flyweight champion Amy Pirnie (23-3-1) will defend her crown in her home town as she faces Spain’s Lara Fernandez (41-12-3). Pirnie captured her title in spectacular fashion as he she blitzed Sandra Godvik from the opening bell and finished the championship bout at Lion Fight 54 in just 47 seconds. Pirnie displayed her championship mettle as she defended the belt at Lion Fight 59 with a decision victory over Lommanee W. Santai.

The co-main event for Lion Fight 68 will see worldwide sensation Jake Peacock (5-0) vie for his second championship belt. Already boasting the North American Super Welterweight belt captured his last time out at Lion Fight 65, Peacock will go after the first-ever Lion Fight European title in the same weight class as he battles Federico Alfaro (17-8-5), who is originally from Spain but now fights out of Birmingham, England. It’s a United Kingdom homecoming of sorts for Peacock, who was born in England where he father Gavin starred on the pitch for Chelsea and Newcastle United. One of Peacock’s most recent victories came in Ireland when he scored a fourth-round knockout against Lee Walton.

The night’s other World title bout marks the return of one of Lion Fight’s most notable champions. Women’s World Welterweight champion Jorina Baars, who is best-known for her sensational win over Cristiane “Cyborg” Justino, returns to the Lion Fight ring as the Dutch star defends her crown against England’s Claire Clements (15-7). After dominating Justino at the Fremont Street Experience in downtown Las Vegas, Baars (46-1-3) cruised through three defenses against Chantal Ughi, Martina Jindrova, and Angela Whitley. Clements earned back-to-back impressive victories in 2019 – the first in her home country and the second in Thailand via a third-round TKO.

A second debuting European title will also be on the line at Lion Fight 68. Standout Thai Pok Biil, who now makes his home in Helsinki, Finland, will make his much-anticipated Lion Fight debut and vie for the continental Super Lightweight belt as he takes on Ireland’s Craig Coakley (21-4). Biil (47-14-4) enjoyed a strong 2019 schedule, winning a title in Thailand and the King of Kings Grand Prix title.

Two additional matchups, highlighted by the much-awaited return of British talent George Jarvis, along with preliminary action will be revealed shortly.

Lion Fight 68 is promoted in partnership with Rebellion MMA.

Still basking in the glory of his viral knockout video from Lion Fight 64, World Super Cruiserweight champion Steve “Put ’Em To Sleep” Walker now faces the most dauting challenge to his belt and undefeated record as he takes on top-ranked British standout Lyndon Knowles. But Walker will have a great deal of boisterous backing from the crowd at Lion Fight 69 as the event takes place at the House of Blues in Walker’s hometown of Boston, Massachusetts.

Walker (9-0) has soared to the top of the heap in the division, his perfect record a testament to his unorthodox yet highly devastating skillset. Following notable wins over Chris Bradford, Kristaps Zile, and Robert Morrow, Walker brought a new-found aggression into his first title defense when he notched a spectacular knockout just 48 seconds into the first round against Brian Collette at LF64 back in March. The tornado head-kick finish instantly gained global notoriety with Walker’s KO appearing on sports website throughout the world. Knowles (47-13-3) certainly represents Walker’s most-dangerous challenge yet. Fighting out of his family-owned gym, the Knowlesy Academy, the 34-year-old from London, England, is a multi-time champion in Europe, and has won five fights in a row, including a pair of TKO verdicts.

The co-main event of Lion Fight 69 brings a thunderous conclusion to the first-ever Lion Fight North American Heavyweight Title Tournament. Semi-final winners “Bazooka” Joe Stripling (6-1) and Warren “Destroyer” Thompson (11-8) will square-off in the finale with the winner claiming the inaugural belt. Both heavy hitters won their semi-final round matchups at Lion Fight 64 as Stripling, who fights out of Wilmington, Delaware, USA, bull-dozed his way past Terrance Hodges in a bloody battle, and Thompson, who hails from Atlanta, Georgia, USA, edged out Cody East in a back-and-forth slugfest.

Lion Fight 69 will also see the crowing of the first North American Super Featherweight champion with the rival combatants being Michael “Iron Boy” Triana (6-1) taking on Brendan Raftery (6-2). Fighting out of nearby Worcester, Massachusetts, USA, Triana has smoothly transitioned down a weight class from the lightweight ranks, picking up back-to-back knockout victories, highlighted by a second-round head-kick KO of Cody Moberly at Lion Fight 64. He’ll be facing a game promotional newcomer in Raftery. Originally from Boise, Idaho, and now fighting out of San Diego, California, USA, Raftery has won four of his last five and is now ready to take a big step up in competition.

A middleweight showdown on the LF69 main card pits rising talent Jose “Braco” Rivera (2-0) against long-time fan favorite Brian “Magoo” Bogue. Rivera, who is from Las Piedras, Puerto Rico, captured an emphatic win in his promotional debut, taking out Zack Fox via second-round TKO at Lion Fight 66 in May. Bogue (3-3) was a fixture in the Lion Fight amateur ranks for many years and recently evened his record with a string of wins in Thailand.

A pair of young guns will aim for success in their pro debuts at Lion Fight 69. Former Lion Fight middleweight amateur champion Shaun Shubert, who fights out of Holbrook, Massachusetts, USA, will go for his first pro victory as he faces Jose “Scarface” Montelongo of Dallas, Texas.