Comedians David Spade, Adam Hunter, and Bryan Callen with be joined by the cast of “Dana White: Lookin’ For a Fight,” the night following UFC 199 in Los Angeles.

On the ‘Lookin’ For a Fight’ show, UFC President Dana White, former UFC champion Matt Serra, and White’s lifelong friend, Nick the Tooth, often participate in stunts or activities that place them outside of their comfort zone; stand-up comedy is likely one of those areas in which none of them are comfortable.

Hunter of course hosts the very funny mixed martial arts podcast, ‘MMA Roasted,” while Callen serves as one half of ‘The Fighter and The Kid,’ alongside Brendan Schaub. 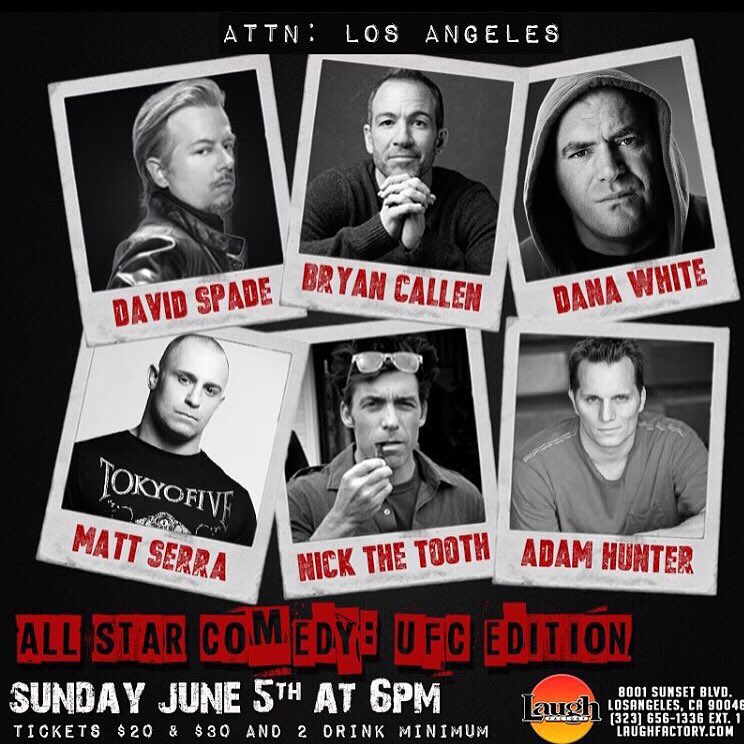 21 years and over age restriction. 2 drink minimum inside, does not have to be alcoholic. *Schedule is subject to change. Prices at the door are $20 General Admission & $30 Priority Admission. Purchase your tickets in advance (over the phone or online). ALL SALES ARE FINAL. NO REFUNDS. NO EXCHANGES. TICKETS ARE NON TRANSFERABLE.