When the cage door shuts on Saturday night, signifying the start of the UFC 205 main event, Conor McGregor (20-3) will have a slight edge over his opponent.  That edge comes in the form of Las Vegas bookies picking the reigning featherweight champion as the favorite to win as he challenges Eddie Alvarez (28-4) for the UFC lightweight title.

The Irishman has been the betting favorite in all but one of his nine UFC fights.  In the one fight that McGregor wasn’t the favorite, look what happened.  Mystic Mac was the underdog when he challenged for the UFC featherweight title against then champion Jose Aldo.  Aldo was favored at -115 while McGregor was not far behind at -105.

It took only 13 seconds for McGregor to show he was serious and to floor the entire fight community, putting Aldo to sleep with one punch.

McGregor has been making money for those who put money down on his fights.

Why McGregor is the favorite at UFC 205

According to UFC MMA betting odds, McGregor is favored to win Saturday night when he challenges for the UFC lightweight title.  Why?

Conor McGregor has been making money for the UFC ever since he set his foot in the door.  McGregor is without a doubt the organization’s biggest prize.

McGregor will have a five-inch reach advantage going into the fight.  The featherweight champion’s 74-inch reach should be enough to try and pick Alvarez apart and keep the lightweight champion at bay. 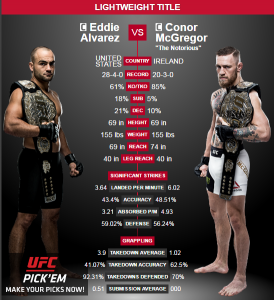 He will also bring in a 48.51 percent accuracy rating in striking compared to Alvarez’ 43.4 percent.

When McGregor throws punches he does it quick and he might even be faster to Alvarez, only time will tell.  McGregor does land 6.02 punches per minute whereas Alvarez only connects with an average of 3.64 per minute.

McGregor has never been known to have great wrestling.  It has been his one weakness and it has shown against challengers like Chad Mendes.  With that being said, McGregor still has a better takedown defense accuracy percentage than Alvarez does.  McGregor sits at 62.5% while the Philadelphia native is right around 41 percent.

After you take a look at the comparison it is easy to see why McGregor is the clear favorite to win.  Throw out the fact that his statistics exceed those of Alvarez and there is still the reality that McGregor has been in these situations before.  Mystic Mac has found himself headlining high profile pay-per-views while Alvarez has not.  Sure Alvarez has been in some big fights, but none have brought the attention the way McGregor’s do.

UFC 205 goes down this Saturday on pay-per-view from the historic and legendary Madison Square Garden in New York, New York.