The rivalry between Conor McGregor and Khabib Nurmagomedov goes back to before these two even fought each other. There was trash talk and bad blood between them leading up to UFC 223 fight week. Notoriously McGregor and crew attacked the bus holding Nurmagomedov and his team and the fire between them grew out of control. When they finally met inside the Octagon, Nurmagomedov had the opportunity to shut down the animosity between them, but as he flew out of the cage right into McGregor’s crew, it was clear the feud was going to continue.

In later deleted Tweets, McGregor explains how Nurmagomedov may have not considered himself of the P4P list but asked to be on it. 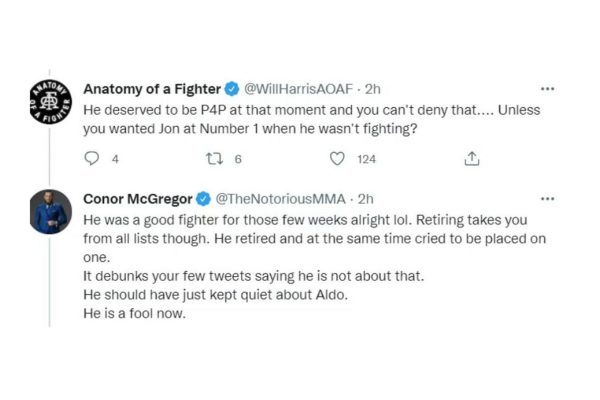 “He was a good fighter for those few weeks alight lol,” McGregor wrote. “Retiring takes you from all lists though. He retired and at the same time cried to be placed on one. It debunks your few tweets saying he is not about that. He should have just kept quiet about Aldo. He is a fool now.”

Harris came to Nurmagomedov’s defense by saying he was in fact a top-level fighter and asked McGregor if he agreed. McGregor then gave his unbiased opinion on Numragomedov’s skills overall throughout his career. 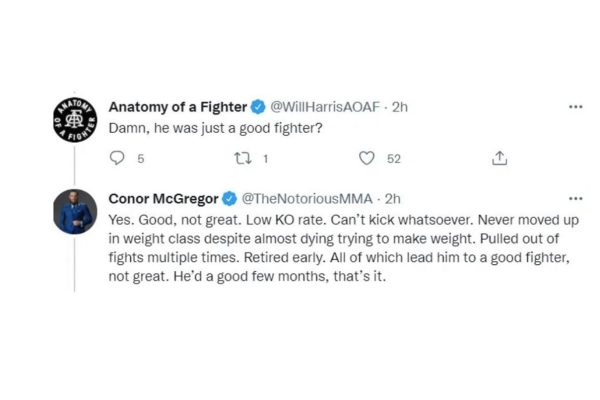 “Yes. Good, not great. Low KO rate.” McGregor wrote. “Can’t kick whatsoever. Never moved up in weight class despite almost dying trying to make weight. Pulled out of fights multiple times. Retired early. All of which lead him to a good fighter, not great. He’d a good few months, that’s it.”

McGregor’s career is currently stalled at the moment. He is recovering from his leg break but has mentioned his desire to return to fighting. Although it is unlikely that we will ever see him against Nurmagomedov again, both men have a very good chance at being in the UFC Hall of Fame when all is said and done. Many fans, unlike McGregor, feel that Nurmagomedov is one of the best ever in MMA, and in the lightweight division. He is still showing his skills in MMA as a coach to the next wave of fighters, who are close to making their own legacies in the sport.

By Mike Pendleton 11 mins ago