Cortney Casey has been a mainstay inside the UFC throughout her professional MMA career, and this weekend when she meets JJ Aldrich at UFC Vegas 21, it’ll be her 13th fight under the UFC promotion. Things didn’t go Casey’s way in her last fight against Gillian Robertson as she suffered a first-round submission loss, but she’s looking for a standout performance this weekend to get her back on track.

It’ll be Casey’s third fight inside the UFC’s flyweight division, a division where one standout performance could have a huge impact on a fighter’s ranking and placement inside the 125-pound class. While both she and her opponent sit outside the top-15 rankings of the division, Casey believes an impressive showing can change things, especially considering her resume in the strawweight division. 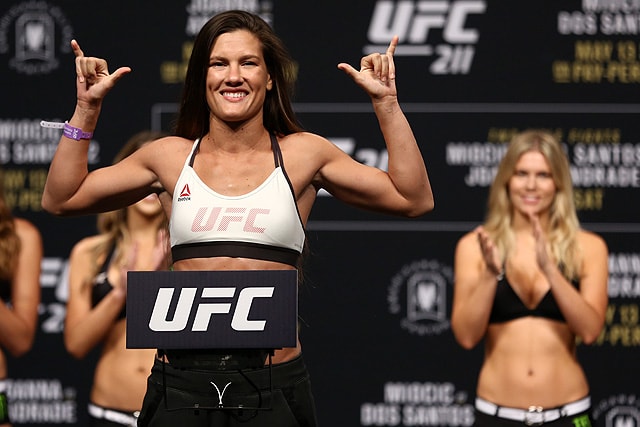 In an interview with the On The Mic podcast, Casey opened up about her mindset going into this fight and why she’s looking to make a statement against Aldrich, but she’s taking it one fight at a time.

“I’m just taking this fight one fight at a time. This is a good fight, good name, good matchup. I think I just got to go out there and do what I know that I can do and put on a performance that I know I can put on, and move forward from that,” Casey said. “JJ’s like right outside the top-15, as am I.  I was ranked for a bit until my lost to Gillian [Robertson], so it’s not that I’m out of reach from those top girls, I feel like I fare well with a lot of those girls in the division, it’s just making sure I get the right fights.”

Cortney Casey is no stranger to knocking on the door of top fights and great opportunities, it’s been the story of her career, and she admits that. However, using her experience from her time in the strawweight division, she knows that fighting the best of the best early in her UFC career can only help her as she looks to continue to improve and grow in her career.

“I pretty much have done my entire career fighting the top girls in the 115-pound division and then I went to the 125-pound division, fought a tough girl, beat her, then fought another tough girl in Gillian and again, for me, I thought it was going to be a different fight than it was and it just ended up not going my way, but that was the first time in all those fights that I’ve ever been finished. It was just a mental error on my part, it is what it is, and we move on from it. I’ve never beat up or knocked out or finished until then.

And a lot of those fights could’ve gone my way as well. I know I’m right there, it’s just finally putting those pieces together and filling those moments that I need to fill in. Once I do that, I think I’ll have a good chance at a run making into the top-10, top-5 in the division and hopefully one day fight for the belt.”

Having to make changes to her life and training schedule due to family and finding a better fit for her, Casey says she feels happy again, and being at the gym no longer feels like a job, which has her feeling better than ever.

“At one point it became a job and I didn’t like that. I want to go into practices and have fun, because I feel that’s when you grow the best. I really needed to focus on myself and now being able to do that, I’m enjoying training again and having a lot more fun training. I feel like I’ve grown a lot since then. Those little pieces are getting smaller and smaller and sooner than later we’ll be able to put that puzzle together.”

As for her opponent this weekend, JJ Aldrich, Cortney Casey knows she’s getting a gamer and not someone looking to just outpoint her, and that’s why she’s looking for a special performance out of herself.

“She’s a great opponent, she likes to go out there and bang too, she’s pretty crafty on the ground as well. So I definitely, I’m hoping for an exciting fight. I know JJ’s not someone that’s just trying to point you and win. She’s going out there to bang and win, and put on a show. I definitely think it’s going to be a fan favorite fight, hopefully we can put on a show. I’m not going to say I’m looking for fight of the night, although I feel it could be a fight of the night performance, but I’m looking for performance of the night, for sure.”

Looking to bounce back from her last fight, Cortney Casey once again finds herself knocking on the door of opportunity in the women’s flyweight division that welcomes it. With a game opponent in JJ Aldrich across from her, this fight is one that can’t be missed at UFC Vegas 21 this weekend.