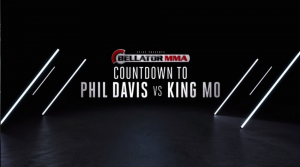 Before the action kicks off in the Bellator cage on May 14th, join us for an exclusive look at the lives and training of world class MMA fighters Phil Davis, and his opponent King Mo. This in-depth show will go one-on-one with two of Bellator’s finest as they prepare for the biggest fight of their careers, LIVE and FREE on SPIKE.

“Bellator 154: Davis vs. King Mo” takes place Saturday, May 14th at the SAP center in San Jose, CA. The exciting night of fights airs LIVE and FREE on SPIKE at 8 p.m. ET/7 p.m. CT while the preliminary card will stream live on Bellator.com and The Bellator Mobile App beginning at 6:30 p.m. ET. Tickets start at just $30 and are on sale now at Bellator.com, Ticketmaster, and the SAP Center Box Office.

Abdulmanap Nurmagomedov Passes Away at 57 Due To COVID-19 Complications

Tafon Nchukwi has no interest in intimidating Al Matavao ahead of DWCS on Sept. 8