Dalton Rosta is unfazed by the experience of Tony Johnson at Bellator 256 on April 9.

Johnson is close to having triple the amount of fights as Rosta. Johnson has fought 11 times professionally, the same amount of combined bouts that all four of Rosta’s previous opponents had at the time he fought them.

Undefeated at 4-0, Rosta is up for the challenge.

“As far as on paper, it’s a step up in competition, but it’s nothing I haven’t seen in a fight before,” Rosta said.

“I am going to go ahead and assume he has more experience than me, but that never really means much to me.”

Experience is not everything for Dalton Rosta

Rosta made a similar jump in competition in his last Bellator appearance. He fought through all three rounds for the first time in his career, defeating the then 5-1 Ty Gwerder via unanimous decision at Bellator 250 this past October.

The 25-year-old finished all three of his previous opponents within two rounds. None of them had over two fights each when Rosta beat them.

Johnson is a two-time Bellator veteran and is currently on a five-fight win streak. He even earned a victory on Dana White’s Contender Series during this stretch, defeating Alton Cunningham via unanimous decision in June 2019.

“The kid [Johnson] is good. He’s a good fighter, a good boxer. He doesn’t have outrageous power,” Rosta said. “I don’t really see too much that’s going to give me a problem really. He’s a tough guy, I’m sure he doesn’t give up and like I said, he has good boxing as well. 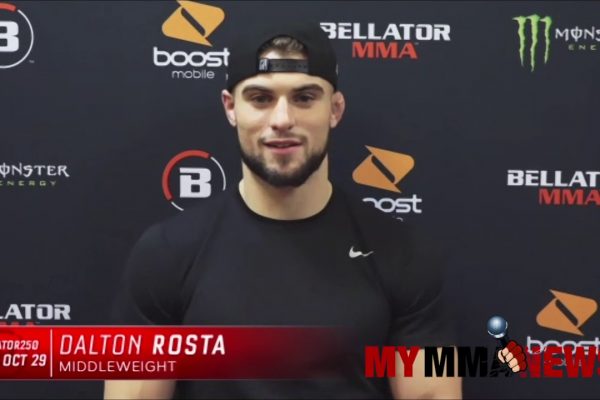 Known for his wrestling, Rosta showcased his striking more than ever before against Gwerder. He trains closely with Anderson França at American Top Team.

He even considers their relationship beyond coach and fighter, he calls Franca family at this point.

“He’s [Franca] elevated my game big time, just adding small tricks into my game, doing different things, mixing things up, whether it be my strikes to my takedowns, my takedowns to strikes, just adding new weapons to my arsenal,” Rosta said. “Don’t be surprised if you see me throw a few things you haven’t seen me throw before.”

Don’t fix it if it’s not broke

Rosta’s wrestling has contributed heavily in all four of his previous wins. So even if fans peg Rosta with a wrestling stigma, it is what it is. It’s gotten him this far.

The young middleweight contender continues to improve and he keeps winning. As the opponents become more experienced, Rosta still finds a way to get his hand raised up to this point.

He plans to stick to this trend on April 9.

“I am definitely going to be using my wrestling throughout my whole entire career and I think it makes me a lot different than other fighters,” Rosta said. “I can strike with anybody, I have the  power to knock people out and I have the wrestling to take down and control people. I think I am a problem for any fighter in the division.”

By Brady Briggs 7 mins ago

By George Glinski 28 mins ago