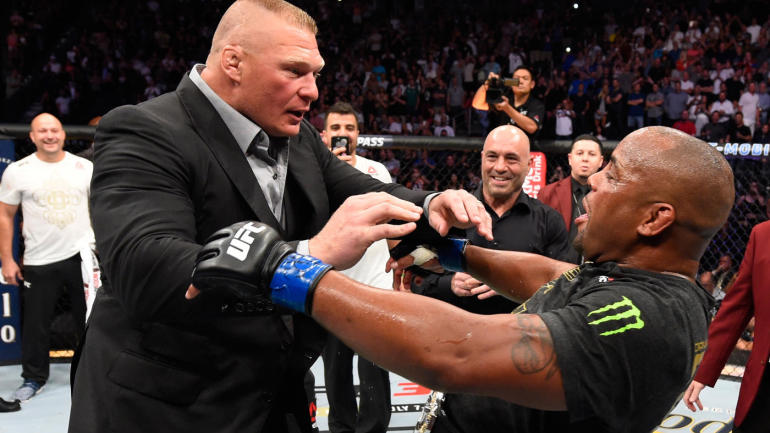 We’re just 3 days removed from what was a memorable UFC 226 event.

But probably the biggest memories that will stand out in UFC fans minds is what happened in the main event, and after, and for good reason… well sorta.

The first being UFC Light Heavyweight Champion Daniel Cormier made UFC history in his heavyweight return as he knocked out Stipe Miocic in the very first round to become the second man in the organization to hold two belts in two divisions simultaneously.

But that was only the tip of the iceberg, as the fireworks exploded after the fight during DC’s post fight interview shortly after winning his new championship.

While addressing the emotional joy of accomplishing his monumental feat, Cormier quickly went into call-out mode when he demanded Brock Lesnar (who appeared at UFC 226 and was spotted visibly roaming around cage side shaking hands and mingling with UFC staff and commentators,) come inside the octagon.

Once the wound up Lesnar entered the cage, he proceeded to shove DC, and a minor melee ensued in which security and Dana White had to step in an separate the two.

The two also exchange some harsh words, with DC telling Lesnar he would put him to sleep for putting his hands on him, while Lesnar insulted top UFC heavyweights Francis Ngannou and now former UFC Heavyweight Champion Stipe Miocic.

After the event had completely wrapped, it was announced at the UFC 226 post-fight press conference that Lesnar will apparently be the 1st challenger for Daniel Cormier’s UFC Heavyweight Title, in which Cormier expressed his personal thoughts on the confrontation with the WWE superstar.

“I guess Brock Lesnar is here to pick a fight,” Cormier said afterward at the post-fight press conference. “So I called him out. I’ve been knowing him for a long time. I told him I was gonna kick his butt. And I will kick his butt when we fight.”

Of course we know in order for Lesnar to even make this title fight possible, must re-enter the USADA drug testing pool which he’s already done recently, gets tested for a little over six months, and serve his suspension.

Alot of people got the notion the chaos that occurred Saturday night between Cormier and Lesnar had a pro wrestling like feel to it.

This doesn’t come as a shock to anyone as Lesnar is the reigning WWE Universal Champion and has been one of the top stars in the organization upon making his inaugural UFC debut back in 2008 and eventually won the UFC Heavyweight Championship.

In the aftermath of the DC/Lesnar situation, it sent a heatwave of criticism on social media as fellow UFC fighters alike spoke out on their disgust of not just the way the incident transpired, but the fact Brock Lesnar will possibly get a crack at the UFC Heavyweight Title over other legit contenders.

What a farce. Diminished the moment significantly. #UFC226

That was the lamest fake confrontation ever..

That was a wrestlemania 2018 promo on steroids! Lol what is going on in MMA today

People night forget that we actually play for keeps on that octagon! Ain’t no scripts for the fights!! #UFC226

In response to seeing these comments from his peers, the new UFC double champion had this to say.

“So yeah, yeah. You guys call it fake online. I see a bunch of fighters. ‘Oh, it’s so fake, I don’t want to watch this.’ Tune in and keep lacing my pockets. You’ve guys gotta get on board. These guys get on the microphone after their fights and say, ‘Yeah, it’s whatever the UFC decides.’ OK.”

Cormier in his defense adamantly proclaimed that the incident with Lesnar was not planned an said he was genuinely surprised that Lesnar shoved him. But was even more stunned that his boxing coach Rosendo Sanchez had squared up to Lesnar.

“When Brock was wrestling in WWE, he was always great to me and my family,” Cormier said. “We’d go to the matches, he’d take pictures with my kids. I guess when you step in the Octagon, your emotions are raised a little bit and Brock pushed me. And then Rosendo pushed him, which was absolutely crazy. Because Rosendo is like 5-foot-nothing. But that’s what my team does for me.”

Cormier also confessed that he relished the heated moment with Brock, being he’s a long time pro wrestling fan.

“You know me, I love wrestling,” he said. “I watched some WWE stuff this weekend. I watched WrestleMania back in the day. I love it. I think it’s great. But look, Brock Lesnar is the champion of the WWE. So, when he comes over here, there’s no script. There’s no Vince McMahon saying, ‘Hey DC, easy on the punches.’ There’s no [WWE star] Braun Strowman where if Brock punches him hard on purpose he isn’t gonna respond. The moment Brock Lesnar punches me, I’m gonna get in his ass. And we’re gonna have him running across that Octagon like a lot of other dudes did. So he can be big and bad and tough right now. But once that cage door closes, he’s gonna have to answer for his words. And he’s definitely gonna have to answer for that shove.”

Lastly, Cormier stated that he would be interested in meeting Brock in the WWE, perhaps in a shoot-style amateur match.

“If they wanted me over there, I’d go over there,” Cormier said. “I’d go beat Brock in a wrestling match. Maybe they do us a shoot match. Put us in singlets and see who wins. Then go major decision him or something, maybe pin him.”

With Lesnar catching his attention after his victory Saturday night, DC didn’t get a chance to give a proper speech, if however if he did, he would’ve thanked his team, family and friends.

But in his mind, Cormier is happy it didn’t work out that way, it’s not because he probably drew an even bigger amount of PPV buys in the mini exchange with Lesnar promoting a future bout with him.

“So in that sense, Brock Lesnar stopped me from crying in the Octagon again,” Cormier said. “He kind of distracted me from saying all that stuff and that would have made me cry again. I don’t need to be another meme.”

By Dylan Bowker 23 mins ago