After his interim welterweight title win at UFC 225, Colby Covington has been the next expected opponent for champion Tyron Woodley, but another top contender says a fight between those two is on hold. Darren Till the No. 2 ranked welterweight challenger took to Twitter to call out the champion and announced that Covington is “out”.

Woodley responded to Till saying that the challengers need to coordinate their “ass whippings” better and he hasn’t been offered a fight. 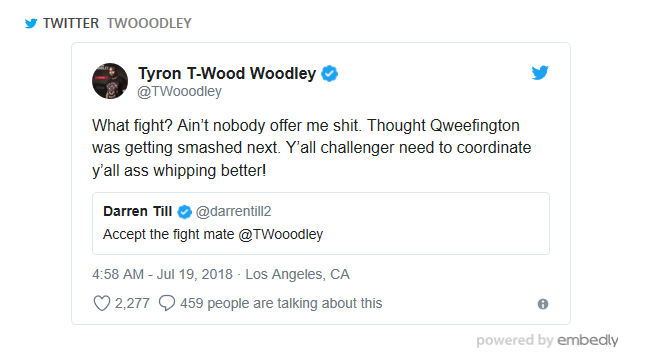 It was in Till’s response to Woodley that he made it known that Covington was out in the fight with Woodley but didn’t specify why. At this time, Till’s comments should only be viewed as speculation as there has been no official news or announcement on the status of Covington. 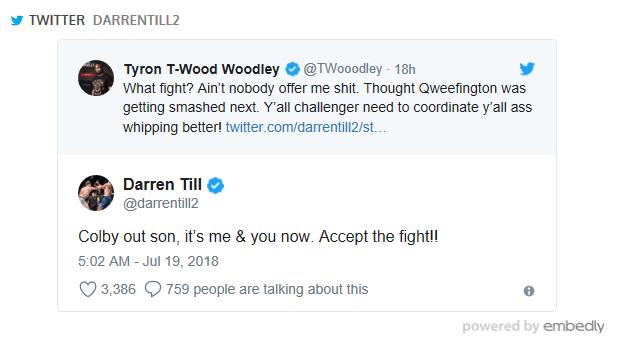 Covington became in the interim welterweight champion when he defeated Rafael dos Anjos at UFC 225 in Chicago this past June, defeating RDA by five-round unanimous decision. Covington has been very outspoken about his feud with his former training partner in the champion Woodley, and the back-and-forth between the two only intensified after Covington won the interim title.

Darren Till jumped to the top of the welterweight rankings after he defeated Stephen “Wonderboy” Thompson by decision at UFC Liverpool. Although victorious, Till did miss weight by 3.5 pounds for his fight against Thompson therefore many called for him to have to wait on a title shot due to the weight cutting issues.

It appeared that the welterweight division had the most clear path in terms of a title fight, but with Darren Till stirring the pot at the top, the wait to see who faces Tyron Woodley next, is on.

By 'Beautiful' Bob Meloni 24 mins ago