Live from the Mohegan Sun Arena in Uncasville, Connecticut, Bellator MMA brings two nights consecutive of action featuring the top talents of Mixed Martial Arts today. Competing on Night Two at Bellator 232, Devin Powell makes his promotional debut as he takes on Marcus Surin. Powell emerged unto the fight scene in 2012, competing in various organizations in the New England fight circuit. Attaining to the grandest stage in MMA, Powell has also showcased his talents as a competitor in the UFC. Along the journey, Powell has experienced highs and lows that come with the fight game territory. Yet, with a wealth of fight experience and burning desire to succeed, the new Bellator venture hopes to open new opportunities for the Port City combatant.

Devin Powell touches on his MMA journey that has led to another pinnacle moment in his career, his debut at Bellator 232 courtesy of this exclusive interview with MYMMANEWS.

You became a prominent rising star in your professional debut from 2012 to 2016. Successful, but the journey was also challenging. What do you feel was the most significant contribution in your triumphant rise in the New England fight circuit?

Devin Powell: “I believe discipline and consistency are my biggest keys. I truly believe my team and everyone I cross-train with. If you stay true to the path and keep putting in the hours when nobody is watching, that is the key to success.”

All the hard work led you to a pinnacle moment in your career, fighting in the UFC. Did you ever see yourself competing in the UFC, and with your successful fight run, was it warranted?

Devin Powell: “I have always enjoyed Martial Arts. I never really looked at a particular league as my ultimate goal. I truly enjoyed the competition and just took it day by day. I ended up fighting four times in six months, while injured with a bad back. I fought for the New England fights title, and then before I fought, I already had a contract to fight for World Series of Fighting, and then after I won both of those. I wanted to take a break to recover, but I got a call to fight three weeks’ notice on Dana White’s ‘Looking for a Fight Show.’ It was a no-brainer to take the opportunity. I broke my nose and tore my MCL, but I still got the job done and won the fight. I think I was exactly what the UFC was looking for.”

How would you describe your experience competing in the UFC?

Devin Powell: “Competing in the UFC is something I’ll never forget. But that’s just one chapter of my life now. I’m proud of what I did. Every one of the staff that I ever dealt with inside UFC was always very helpful and a pleasure to work with.”

You underwent some tough challenges competing in the UFC, tallying a win-loss record of 1-3. Your performance, unfortunately, led to your release from the company. What was the biggest disappointment that came with that incident?

Devin Powell: “I would’ve been a lot more disappointed if I was released after going 0-2. My first fight in the UFC, I didn’t have a lot of time to heal from a broken nose and torn MCL. I got my opponent switched three weeks from the fight. I ended up fighting somebody who was the number one MMA recruit in the country, a state champ wrestler from Michigan, who was brought to train at The Lab with Benson Henderson. I fought him in Arizona, which is the same state that he trains. Having that match as my debut, being booed the whole time, having total silence anytime I landed any shots wasn’t the smartest first fight.

“I remember begging Sean Shelby to give me one more chance. Sean finally obliged. After 13 months off with a rupturing a testicle and I got my opportunity to prove I was among the elite and could win inside of that octagon. I got a first-round knockout in Calgary. I wouldn’t consider this a disappointment but something that I now realize the importance of is management. Even with management, sometimes such a big company is hard to deal with. After my win in Calgary, the UFC put me in physical therapy again for my bad back. While I was still in physical therapy, I got a notification that I was fighting in Argentina without even being asked.

“I spoke with my management, and he told me that the UFC asked the other team if they wanted to fight. They hadn’t asked me yet, so I asked him what we had to do, and he said that we had to take the fight, so we took the fight even while I was still in physical therapy. Also, during the entire fight camp at my academy, the place was flooded in the main room, so it was a whirlwind of inconvenience. Not to mention, I suffered a Hyphema hyphemia in my eye, causing temporary blindness in the middle of the second round until I left the hospital that night.”

Pressing on, you now find yourself back competing on another big fight stage, as a new challenge at Bellator FC. How did this opportunity come about?

Devin Powell: “I have been talking to Lee Hamilton Cooper, the photographer for Bellator, while I was in the UFC. I told him how much I liked Bellator, specifically how the fighter can wear their sponsorships and be more of their own characters. Some fighters get funny walkouts like David Rickles, and I just always took to that stuff. I told him if I ever fought for Bellator, I wanted to walk my pig out with me. When push came to shove, and I ended up messaging him and telling him that I had the opportunity to fight elsewhere, and I wanted to be with them. He started talking to Bellator at the meetings because he thought I was a perfect fit, and my manager Tyson Chartier Also started contacting them. This was several months back, but now I find myself one week out from my first opportunity with them.” 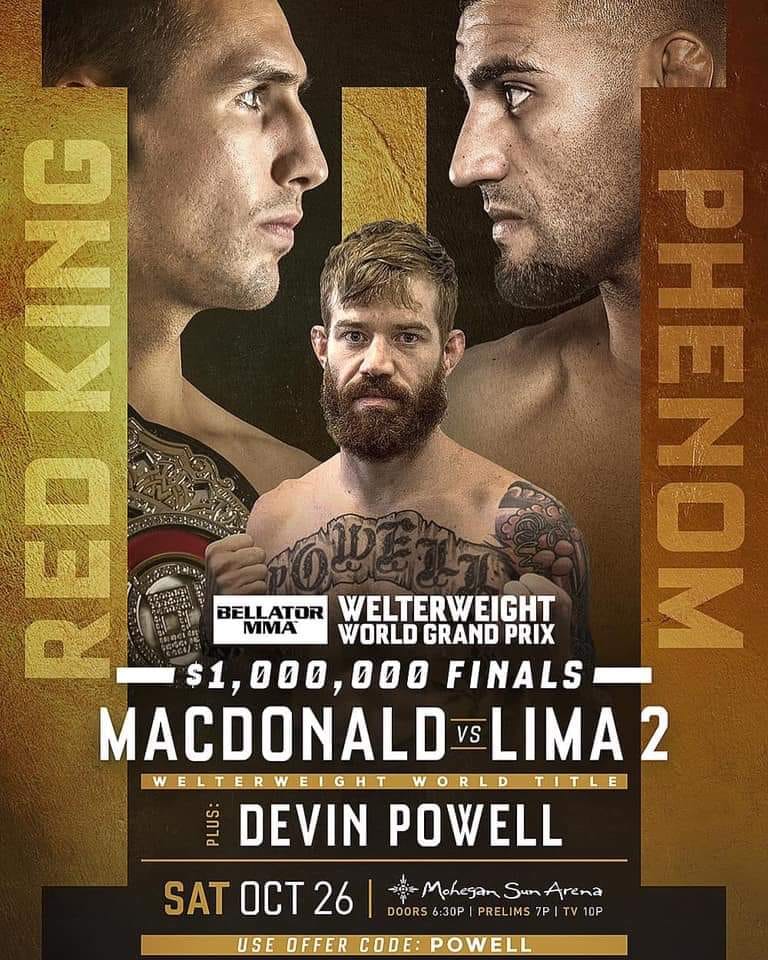 You will be making your company debut at Bellator 232. Being that you competed on bigger fight platforms, Is there less pressure going into your first fight appearance for this company?

Devin Powell: “I feel less pressure because I’ve made adjustments with who I’m training with. Training at Joe Lauzon’s gym has been incredible. My time there has allowed me to see where I fit in with other incredibly talented up-and-comers has kept my confidence very high. I believed I could compete before, but I didn’t have the people to be training with to see this within myself. Now I have a chip on my shoulder and something to prove to everybody who thinks that I can’t compete with world-class athletes. In my eyes, this is the biggest card I’ve ever been on. The winner of the main event is going to win $1 million for the Grand Prix finale. And the way I see it if I perform impressively enough and Bellator likes me enough when they come around to doing a 155 Tournament. I could potentially earn a spot on that.”

What is the importance of walking out with a victory in your debut?

Devin Powell: “I don’t know who said it, somebody smarter than myself, but it is very true – ‘losing hurts a lot more than winning feels good.’

“The longer you do this, the less satisfied you are each time you win. It just feels like that’s what supposed to happen, then you get out of a camp, and you think all right it’s time to do it again. But when you lose, every single day until you can get your hand raised again, you have that feeling in your stomach where you’re not satisfied where you’re slightly heartbroken and feel like everything in life isn’t right. When you put every single second into your day to try and be ready for these fights and sacrifice time away from your family, and you see your daughter grow up but you’re not getting the time you’re supposed to with her, and you don’t walk away with a victory and half your money stripped from you it’s tough to get back up and just do it all again. We’re always looking for that payoff, and eventually, hard work always pays off. It’s only based upon how many times you’re willing to dust yourself off and give it another shot. I’m not done, yet I haven’t put any less energy in, and I never do. It’s always all in until the wheels fall off.”

Finally, where do you want this new journey in Bellator to take you?

Devin Powell: “The only thing I’m concerned with right now is getting my hand raised, and that will open doors for the future. I believe that if I can’t get the job done after all this sacrifice and hard work yet again that there’s no denying that it could be time to put fighting behind me and focus entirely on my academy and my students and watch them get into the big leagues and the big arenas and just enjoy watching them take my path but go even further than I could have ever imagined.”