It may not be happening in the main event of UFC 200, but the new UFC 202 main event, Nate Diaz vs. Conor McGregor 2, is still going to be a part of International Fight Week. 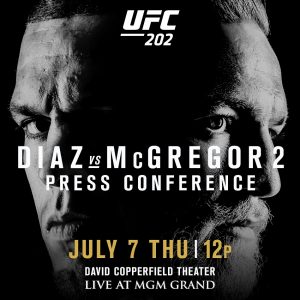 The Diaz-McGregor 2 press conference will kick off three fight cards in three days when the two superstars rekindle their war of words ahead of the anticipated rematch.

The press conference goes down July 7 at 3pm/noon ETPT at the David Copperfield Theater at MGM Grand. Later in the day Rafael Dos Anjos defends his UFC lightweight title against Eddie Alvarez in the main event of Fight Night Las Vegas live on UFC FIGHT PASS.

Make sure you head to the tickets section of UFC.com to get your tickets to all the great events of UFC International Fight Week.