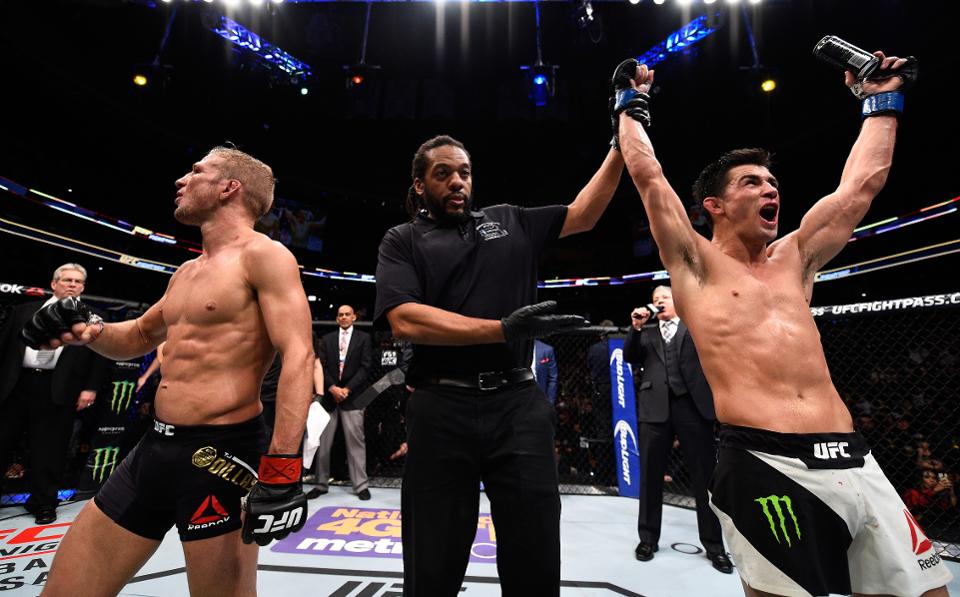 This past weekend at UFC 227, current bantamweight king TJ Dillashaw further cemented his legacy as an all-time great after dusting his longtime rival Cody Garbrandt via first round KO. But now, it appears another rival from Dillashaw’s past may perhaps be next in line for TJ – the last man who beat him, Dominick Cruz.

“The problem is, I beat him already. You can’t be the best unless you beat the guy that beat you,” Cruz told Helwani. “I know I deserve that title shot because I defended that title more times than anyone in the history of the division.”

Although Cruz makes a solid argument for a title shot here and the fight would most definitely sell, the fact is that he hasn’t fought in almost 2 years and his last fight was a one-sided loss to the guy that Dillashaw just smoked.

Dillashaw, who lost to Cruz via a razor-thin split decision the first time they fought, had this to say to Cruz on Fox Sports 1 following his big win Saturday night,“I’m not ever afraid of a challenge, but hey, Dominick Cruz hasn’t even fought since he lost the belt. He made me chase around No. 1 contenders, so get to work, Dominick.”

Now, you would almost think that Dillashaw would be chomping at the bit to avenge that loss to Cruz, a fight that many felt Dillashaw won. But Cruz can be a very tricky fight for anyone in the division, and his style seems to frustrate the hell out of Dillashaw.

Cruz, whose career has been plagued by injuries, has recently been cleared to return to action following an injury to his arm and says that he hopes to return before the year’s end.