The first time I ever tried on a pair of pants from Duluth Trading I instantly fell in love.  It is kind of like when you find a comfortable shoe or sneaker, you’re mind has been made, you buy them immediately.  I had never worn such a comfortable pair of pants up until that point. 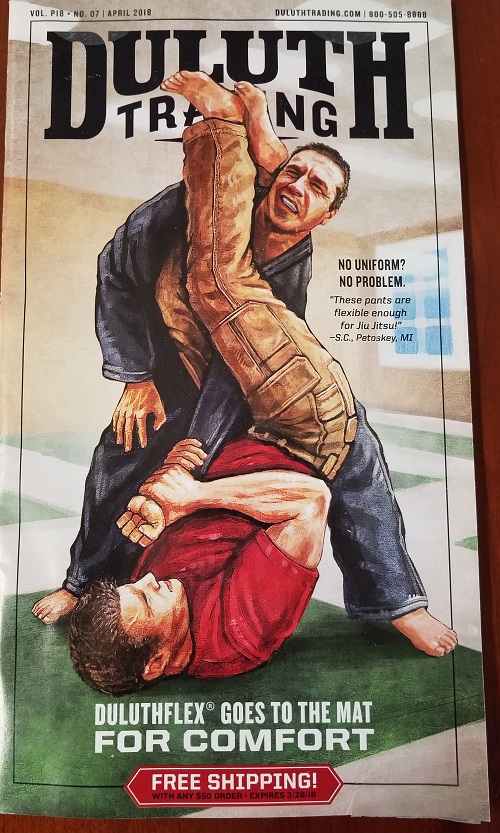 How could a pair of pants made from “fire hose” be so comfortable? They just were.  I bought several of the heavier duty pairs and left the store.  One of the first things I wondered as I felt more free and flexible was, ‘Could these pants be used for jiu-jitsu”?  I didn’t actually try to compete with the pants but then a few weeks later my father-in-law said he was ordering a lighter pair of pants from the Duluth website and asked if I would like to get a pair along with him.

I immediately said yes, and when the package arrived I again was amazed.  This pair was even more comfortable than the other pairs which I had already thought were the most comfortable pairs of pants I had ever purchased.

Several days later a Duluth pamphlet arrived in the mail.  Much to my surprise, the cover had captured my initial thought about wearing Duluth while training jiu-jitsu.

You may have seen some of the hilarious Duluth Trading commercials on TV and wondered exactly what the product was or why they stand out among the competitors.  You won’t really know until you try.

As soon as I held the jiu-jitsu themed advertisement in my hand I could immediately envision training with a pair.

I began to emulate what it would be like in competition just to save myself from any embarrassing rips or tears that might leave me exposed if in the public eye.

Nothing.  I actually felt even more free than in a traditional gi.

The only hang up that I would find is that depending on which pair of pants of pants you choose from Duluth, there may be obstructing pockets or zippers.  The lightweight pants are exactly what would do the trick on the mat.  I began to grapple with a friend and just as I had suspected, no issues.  Don’t expect Duluth pants to replace the gi in our lifetime, but I do suggest them as an alternative should the instance arise.

Check out Duluth’s “Dry on the Fly,” Flex pants.  Take a peak at them here.

Get yourself a pair and head out on to the mats.

By Michael Henken 5 hours ago