Hard work beats talent when talent doesn’t work hard, but when you combine both you get up and coming boxer Erreyan Shinal. He discusses why he works harder than your average 18-year old as well as his desire to use boxing to elevate himself and his community. Currently 4-1 with 2 belts already to his name it’s clear he’s a prospect to keep your eye on.  Erreyan Shinal goes one-on-one with Kelly Richards of MyMMANews.com.

Tell us how you got into boxing and martial arts.

“It’s really always been something I was interested in. As a child everyone’s first boxer they know is usually Mayweather or Ali. I started off as one of them typical people. Then I got more into it and started to really see some of the greats. I started to work on my history of boxing and martial arts.”

How long have you been training?

“When I first started here I was 14 going on 15. However, I had an accident involving my muscles. I came back when I was 17 and I’m 18 now. I usually say four years, but it’s actually not that long.”

Do you think having that accident at such a young age motivated you to be a better fighter?

“It did. A lot. I always tell people that when they ask what my motivation is. Being in that wheelchair was my motivation. Going through depression, not being able to train. I’d see on the internet my team mates training without me. It hurt a lot. I always told myself once I get out I’m never going back in. Once I got out of the wheel chair I was hungry. I wanted it more. Back when I was 14, 15 I wanted it but not how I want it now.”

“Yeah, it’s my first one. I’m pretty nervous about it but I trust my team. I trust my coaches to get me ready for it. I have no doubt that I’ll destroy it.”

Tell us how you got your nickname Bunny.

“I came up with that nickname myself and everyone agreed. There’s a world champion out there named Robert Easter Jr. He’s someone who I watched when I was in the wheelchair. One of the ones I studied. He fights at 130. He’s pretty skinny and tall for his weight class. His nickname is Bunny as well. When I was around 14, 15 I reached out to him on Twitter. I told him I’m a boxer. What’s some advice you got for me. If you go on my Facebook you can see my cover photo is him telling me to stay motivated, stay true this sport and dreams do come true. I wanted to be like him so much. I’m like dude I’m already fast. It all comes together. So, I kind of stole his nickname, but I hope he’d be happy to share that nickname with me.”

Is it safe to safe that you’re looking to make boxing a career and not just a hobby?

“For sure. I’m not just in this for the workout. I’m in this to become something. Do something with it.”

What are some future aspirations besides boxing you have?

“I always wanted to start a community center. When I was young, around the same time, 14, 15 I was going to the community center called the Holton Youth Family Center. We were all like a family. Everyone from the Eastside we all knew each other. That’s how I got most of my friends now from that community center. It was always like here at the gym such positive energy. Then it closed down which hurt me a whole lot. I used to go there and then come right to Red’s. I always told myself if I ever make enough money I’m going to start something like that. Something that bring the community together. Kids don’t have to worry about what’s going on outside. We can come in and have fun. Maybe some boxing class there, you never know.” 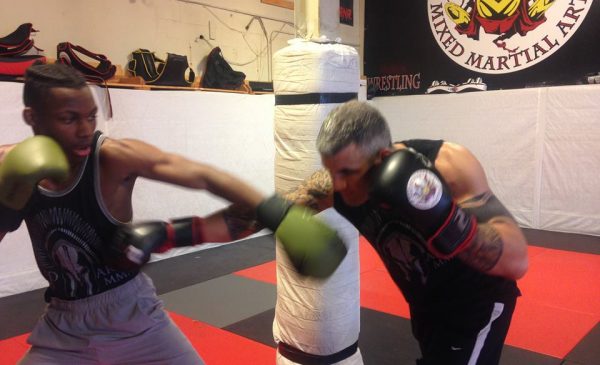 Tell us about your training schedule.

“An average day for me with training is coming in the mornings. I train for about an hour or two with Coach Scotty. After that I go to school. Then I come back at night to get some more in. I see how the pro fighters are training. I look around me and see amateurs not training at that level, but I think if I want to take it seriously why not train at the professional level? I feel like this is my way out. Why not train like a pro fighter? Everything I do I see professionals do it. Terrance Crawford, one of my top favorites, Andre Ward. I see how they train and they’re not undefeated for no reason. They in the gym putting in work. That’s not just talent. People ask me how did you get so good? I tell them because I want it. I can be one of the greatest.”