Editor’s Note:  The following is a recap of a social media engagement that is taking place on Facebook.  The author, based in the United Kingdom, talks about an incident where a group of individuals that would be labeled as feminists are upset about a social media post that seemingly meant to do no harm and may or may not have been taken out of context.

Below is his recap:

An Edinburgh, Scotland based MMA gym is causing quite an online argument after a recent online poll/offer.

Promethean MMA in the UK posted on their Facebook 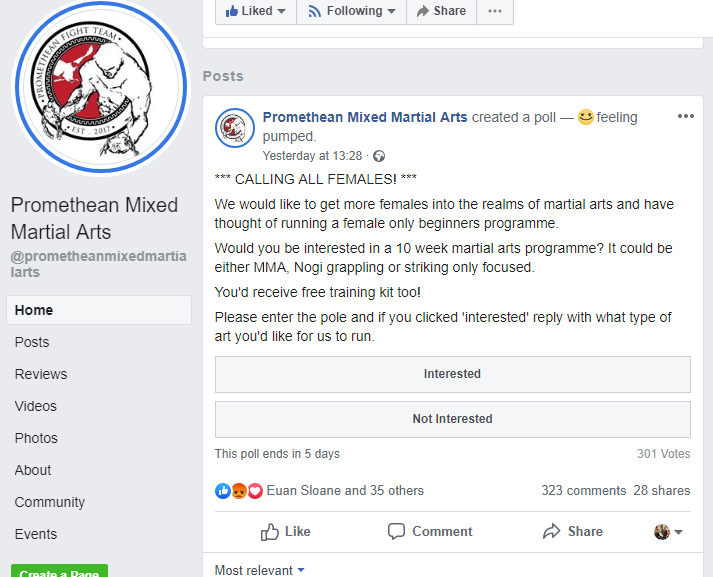 We would like to get more females into the realms of martial arts and have thought of running a female only beginners programme.

Would you be interested in a 10 week martial arts programme? It could be either MMA, Nogi grappling or striking only focused.

Please enter the poll and if you clicked ‘interested’ reply with what type of art you’d like for us to run.

This has sparked fury from some claiming that the term ‘Female’ is misogynistic… some have commented saying “if you want women to be interested, call them women, not females.”.

Further investigation on this supposed ‘outrage’ though is that the vast majority of these comments come from people on the other side of the world, who have little to no interest in martial arts and are acting as preachy virtue signallers.  One person going by the name Burgess Tolliver (a self-employed homecoming king/queen according to Facebook) called for the MMA Gym page to be taken down and ordering the gym to use the correct terminology in future as it makes for better business.

I myself only hear good things about Promethean MMA with good mix of BJJ, wrestling, striking and strength and conditioning… If you’re in the Lothian Area, go check these good guys and gals, males and females out and get your body on the mats!

Furthermore, we were able to speak with the gym owners themselves and they had this to say:

“I think it’s uncalled for if I’m being honest. It’s been hard work for just under 2 years growing it from 3 members to just over 40 consistent. It’s always going to be a tricky sell for getting women/ladies/females into the sport. Generally the feedback is they’re keen to try it but don’t like the idea of having to roll around with men or lack the confidence to attend in a male dominated environment. So I decided to change up my beginners course and see if a womens only course would do the trick. I’ve used the term female all my life… never seen it as derogatory or been pulled up about it before either. So to see such a negative backlash from a large group of Americans over a word is pretty mental. It was supposed to be a course to help include women into martial arts. The context didn’t hold any negative connotations so it’s baffling. I believe everyone should participate in some sort of martial art. The positive benefits are innumerable. I’ve met so many people from every walk of life through martial arts that I wouldn’t have batted an eye lid if walking past them in the street.”