Wrestling has always played a strong role in the shaping of mixed martial arts and the UFC. Now more than ever the UFC President needs to sign one collegiate wrestler to a developmental contract. White’s counterpart, Scott Coker, President of Bellator, has been signing NCAA wrestlers to developmental contracts over the last seven years. It’s time Dana White takes a page out of Coker’s book.

Gable Steveson is coming off an NCAA National Championship season. He dominated his way through the NCAA national championship tournament to eventually defeat Michigan’s Mason Parris in the finals by a score of 8-4. Steveson was a co-winner of the Dan Hodge Trophy (the Heisman trophy of NCAA Wrestling) with Iowa’s Spencer Lee.

Steveson finished his Junior season as a 2021 National Champion in the heavyweight weight class for the Minnesota Golden Gophers. In 2019, he finished third at the national championships and is also a three-time Big Ten finalist, capturing two Big Ten titles. Due to last season being cut short by Covid-19, the NCAA granted another year of eligibility to their athletes. This past season was technically Steveson’s Junior season giving him another year to compete in college if he decides to.

As of now, the Minnesota Golden Gopher holds a record of 67-2, as his only losses coming at the hands of the former heavyweight champion out of Penn State, Anthony Cassar. 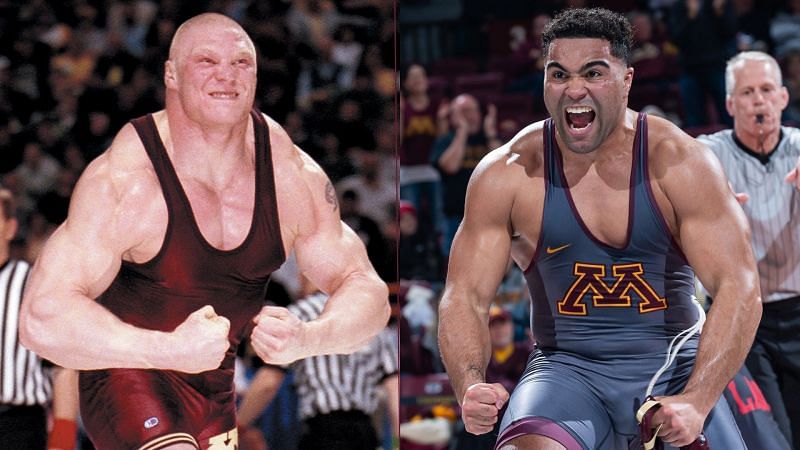 He currently is set to compete tonight, Saturday, April 3, in the U.S. Olympic Team Trials finals against former two-time NCAA wrestling champion, Nick Gwiazdowski. They will wrestle best of three matches in the finals for a spot on the United States Olympic Freestyle team.

Nick Gwiazdowski is another heavyweight NCAA wrestling great that has been training in MMA. He too would be a great addition to the UFC heavyweight division.

When you have a wrestler this dominate at heavyweight, with his athletic abilities, the UFC should be throwing money at him to sign a developmental contract.

As the newly crowned UFC heavyweight champion, Francis Ngannou waits to hear who is next after he finished the greatest heavyweight in UFC history, Stipe Miocic. People are saying the “Black Beast” Derek Lewis is next since Jon Jones has priced himself out of the fight and has requested a release from the UFC.

As the list of possible opponents piles up, everyone knows that Miocic’s path to victory the first time he fought Ngannou was through wrestling. In their rematch, Miocic admitted to straying away from his game plan and ended up suffering the fate like so many of Ngannou’s foes, a knock-out finish.

I know Steveson is far from contending in a UFC title fight, but if there is a man with the potential to dominate Ngannou, it would be Steveson and his extreme athletic abilities. His wrestling skills are far superior to Miocic’s skills.

A display of Steveson’s athleticism took place after his victory in the NCAA finals when he did a handspring to a backflip.

Ngannou weighed in at 263 for his title fight against Miocic, who weighed 234. Steveson weighs 260 while wrestling at the 285-pound weight class. And, Nick Gwiazdowski weighs in at 276.

Steveson and Gwiazdowski both are seeking an Olympic gold and one of them will be a part of Team USA after tonight’s Olympic Team Trials Finals match between them. The finals begin at 7:30 PM EST. on NBCSN.

Dana White should not waste time. Steveson tweeting he wants a Pro Day and about the WWE.

I am going to be the biggest star @wwe has ever had.

Dana White, you want to build the UFC heavyweight division’s future? Sign this man to a contract! If you think Brock Lesnar was an attraction, I would love to see Gable Steveson step inside the octagon.