Gemiyale Adkins pled guilty to one count each of second-degree and fourth-degree rape for sexually assaulting a young child in the summer of 2016. 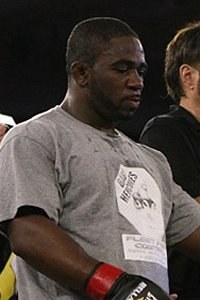 The 34-year-old New Castle, Delaware man will go to prison for at least 10 years for raping a child, the Delaware Department of Justice announced Friday.

According to the DOJ, Adkins who guys by the name “Jimmy” and also “Baby Hercules” will be sentenced in November, and faces a minimum mandatory prison sentence of 10 years. He’ll also be required to register as a Tier III sex offender.

Adkins held a professional mixed martial arts record of 11-9 and last competed in the co-main event of Hero FC: Best of the Best 5, in June 2015.  He lost via first round submission.

****UPDATE – December 3, 2017 – Adkins was sentenced to 25 years in prison on December 1.  He also must register as a sex offender, in addition to receiving his prison term, six months of either home confinement or work release and 10 years of probation, the Delaware Department of Justice announced.

By Adam Martin 2 mins ago