A common theme in Ian “The Hurricane” Heinisch’s life has been growth and maturity. His path in life has been well documented and has since led a life of respect. Heinisch has taken his second chance and has become one of the top prospects in MMA. Currently, with a record of 10-1 and on July 31, Heinisch will compete on Dana White’s Tuesday Night Contender Series against Justin Sumter.

Ian Heinisch says he doesn’t regret his past because it led him to be the person he is today.

“I’ve turned my tribulations into a testimony.”

“I actually don’t regret anything because it made me the person I am today and I want to be a guy people look at and say, man, this guy was rock bottom and now he’s the UFC champ and inspire people and help people they are not too far gone and can bounce back.”

He has plans to help those who are currently on the wrong path like he was since the current system they are in isn’t designed to help them.

“My dream is to open up a gym that’s like a gym we have, an MMA gym/rehab facility where kids under 25 or young kids getting these huge prison sentences instead of them going to prison and pretty much going to crime school and a revolving door in a system that is broken and doesn’t rehabilitate people that can go and get an opportunity to train full time and to have great mentors and people around them and get them on track so they do get rehabilitated. Like I had the opportunity in Spain to do.”

There will always be critics, people who believe that second chances shouldn’t be given. Heinisch believes they have to look at themselves before they judge others.

“For the people that judge other people on their past, they gotta take a look at themselves because they’re in no place to judge. I believe the only person who can judge us is G-d and at the end of life you have to face judgement. I believe anyone can make a change but they have to want it for themselves first not just the people around them wanting it.”

The Hurricane has also faced challenges in his fight career, most notably at LFA 22 when he was competing for LFA’s middleweight title against Markus Perez in his home town. But it wasn’t to be as Perez submitted him in the first round and was given a contract by the UFC. Heinisch, says he didn’t deal with the pressure well or his personal problems.

“It was a lot of pressure too, win the fight, go to the UFC, first title fight, home crowd. It was a lot of pressure, I let it get to me I guess, I wasn’t living like a champion outside of the cage, I just had to correct a few personal things in my life and I did that. Now I’m back and I’m stronger, I’m mentally in a better place than I’ve ever been.”

As he did with other challenges in his life, Heinisch made adjustments and has put himself back on track. Since his loss to Perez, Heinisch has finished two opponents. His last finish earned him LFA’s interim middleweight championship. It was quickly after his fight that he learned of the opportunity to compete on the Contender Series. At the same time he was hoping he could fill in short-notice in the UFC.

305 Likes, 31 Comments – Ian Heinisch (@ianheinischmma) on Instagram: “Wow what a night! First I want to give thanks to God! 🙏🏻 then my coaches @coachmarcmontoya @mcbusy…”

“Pretty much the week after my fight I was told about it but not too official. We kinda kept it on the low and I was still kinda hoping with all these fight cards with so many middleweight fights that somebody was going to pull out and they didn’t and that was fine. The fight was announced on the pay per view the other night, Stipe vs. DC. So I’ve known about if for a little while, like I said I had to change my tone and I’m excited about the opportunity.”

With that attitude change, Heinisch said he is thrilled with the opportunity to fight in front of Dana White. He is also happy with his opponent, whom he thinks isn’t on his level.

“I believe he’s a little green, he probably got lucky to get this opportunity but I’m not overlooking him. It’s kind of striker vs. wrestler but yet I’ve knocked the last two guys out. I’ve done really well against really good strikers. I just believe I’m a complete fighter and I believe there are lots of holes in his game. And as a complete fighter, as we know, they come out on top.” 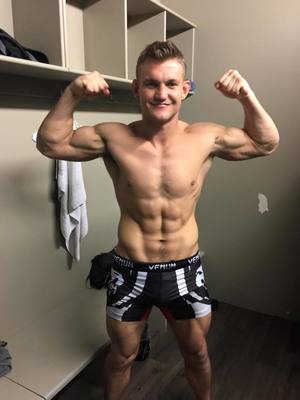 The 29-year-old has been getting rounds in with the likes of Anthony Smith, Chris Camozzi, Matt Brown and Gilbert Smith.

With a win, and a contract already in his mind, Heinisch is already thinking of opponents and the schedule of fighting as a UFC fighter.

He likes the idea of facing former LFA middleweight champions Anthony Hernandez and Markus Perez as well as fighting in Denver in November and even once before then.

“I would love to, I would love to get one before that, that would be ideal but if I had to wait till November, I would. But it would be cool in between that as well, I like to stay active. I want to mimic the Neil Magny way of going into the UFC and just fighting as much as I can.”

“Tune in July 31, Dana White’s Contender Series, expect an exciting, action packed fight with me getting my hand raised at the end and the UFC contract.”

“The fans should just know it’s Hurricane Season and it’s going to be a fun exciting fight. Tune into UFC Fight Pass, July 31.”

By Monta Wiley 20 hours ago

COVID-19 with a positive spin