On Friday, June 11, 2021 eight women will enter the  Invicta Fighting Championship cage to vie for the title of “Top Atomweight Contender.” The fights will consist of one round quarterfinals and semifinals. There is a possibility of the advancing fighters to fight up to three different opponents over the course of the night. 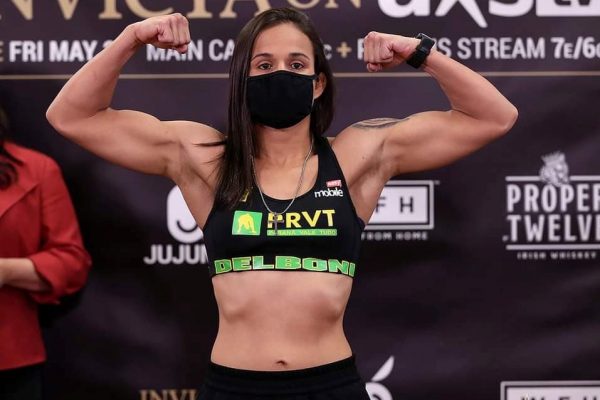 Current Invicta Champ, Alesha Zappitella, took the vacant atomweight title at Invicta FC 42 against Ashley Cummins back in September of 2020. In her first title defense at Invicta FC 44 back in May, Zappitella found herself standing across the cage from a 27 year old, Taekwondo black belt from Vila Velha, Espirito Santo, Brazil, Jéssica Delboni.

Delboni stood her own against the champ, dodging many of Zapitella’s attempts for shooting takedowns and substantial strikes. All in all, the fight was pretty evenly matched, with Alesha Zappitella retaining her title by a close split decision over Delboni.

Jéssica Delboni has a professional record of 10-3, with most of her wins coming by way of decision. Since she last fought the current atomweight champ less than a month ago, she seems the easy choice to be the top contender, with or without a tournament.

I took some time to delve into the world of atomweight, Jéssica Delboni.  She gave me some insight to her last fight, the Invicta FC Phoenix Series tournament, her humble beginnings in martial arts, and who she thinks will be her biggest competition friday night in the Invicta FC cage.

Your last fight back in May, we saw you losing a heart breaking split decision to atomweight champ, Alesha Zappitella. Fans opinions a are also split on who won that fight. While you were waiting on the decision, what was going through your mind? 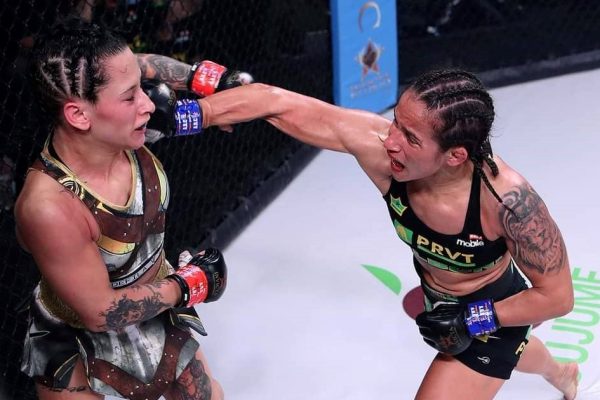 Delboni: I was sure I had won that fight. I cried a lot as it ended because I’m almost two months away from home and I work really hard when I’m in camp for a fight, I had two fights canceled in Brazil before fighting for the title so I’ve been dieting and training hard for a long time. I trained a lot and I knew how much I deserved it, it was a good fight, I felt I could have knocked her out but I didn’t and that makes me very sorry, I’m sure that in the fans’ view I also totally won the fight. I was very upset with the result. But I left the fight in the hands of the judges and unfortunately I can’t regret it.

In your opinion, how does Invicta FC compare to other fight promotions that you have fought for?

Delboni: Invicta is a very good event, for sure the best event I’ve ever fought, they treat the athletes very well. It’s a high profile event where I know any fight is going to be tough. The atom weight category at Invicta is certainly the biggest and I know that we really see there who is the best in the world in this category.

Delboni: Today I’m inspired by my girlfriend Karol Rosa, UFC athlete, by my master Gilliard Paraná, who was a great athlete when he fought and who is a great master. In my training partner Jessica Andrade. And I’ve also followed Cris Cyborg’s fights a lot, she inspired me a lot when I started in MMA.

Where do you train, and what is the most difficult part of your fight camp?

Delboni: The hardest part is the Camp itself, having to diet and intensify training is something I think every athlete doesn’t like. But that’s our job. I never stop training, usually after a fight it’s a week off and I’m training three times a day again. So I intensify the part of working on what is strong in my opponent so as not to be surprised in the fight.

You recently posted on social media a picture with three “sinister black belts”  Who were they and how did they help you in your training? 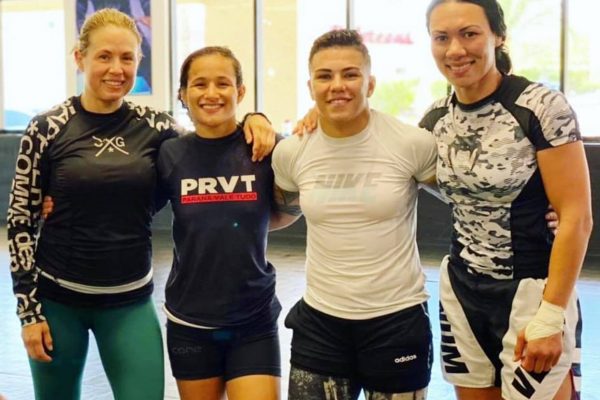 Delboni: The girls in the photo are Jéssica Andrade from my team, and also black belts Raquel Canuto (Raquel Pa’aluhi) and Gabriela Muller. After my last fight I received the proposal to fight the GP again in 3 weeks. I’m here in Las Vegas and we don’t have a gym here yet, so my master and my training partners and I are training at the UFC Performance Institute. We are training Jiu Jitsu and submission submission at the Venum Training Camp here in Vegas where black belt Raquel Canuto and Renato Canuto teach. I want to emphasize that I am very grateful that they opened the gym so we could train here, in addition they are giving me all the support and helped me a lot in training.

Tell me about that young Jessica back in Brazil, that decided to start training in martial arts.

Delboni: I started fighting when I was 12 years old. I started in Taekwondo initially to lose weight and it ended up becoming my passion, I always wanted to fight, so I competed a lot in Taekwondo, won many competitions, I became a black belt at 17 years old. I started watching some MMA events and decided I wanted something more, so I started training Jiu Jitsu and boxing in addition to MMA. I worked as an intern at the city hall in my city and was studying at the time. I took all my money I received from an intern and paid my monthly fees to train the 3 sports. After that I started studying veterinary medicine, I debuted in MMA at the age of 19 where I won and after 2 and a half years I had my second fight and I won too. I had two fights and two wins, I was a Jiu Jitsu purple belt, went to college and worked as a waitress from Thursday to Sunday. 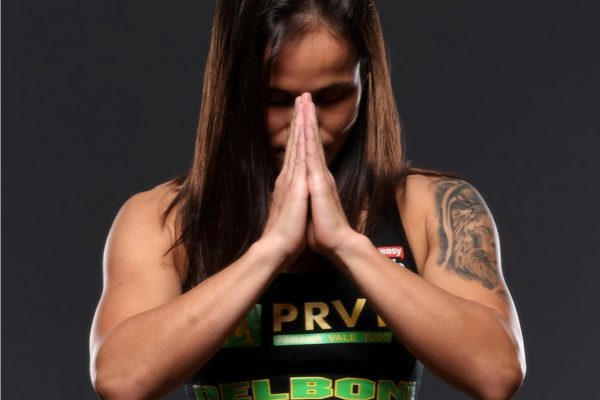 Everything was very demanding, because I used to ride my bike back and forth and I always gave everything in training and worked late and I liked college a lot but I ended up pushing with my belly. So I took less material to be able to train more and that took me longer to walk through college. Nobody believed that I would get somewhere, in my state I didn’t have girls to fight and because I didn’t believe I could get somewhere my old teacher most of the time didn’t accept the fights. So after 2 years that I wasn’t fighting, my girlfriend fought against a PRVT opponent in my state, that’s where we met the PRVT team from Rio de Janeiro. I started to give more value to college at that time and decided to take more subjects, I started getting good grades and I had already decided that I would work in the anesthesiologist or cattle breeding area. It was then that I decided to try one more time because I thought I would regret it when I had to explain to my children in the future why I had stopped fighting. So I decided to send a message to several managers, the first one who responded was PRVT. So he invited me to spend a week training in Rio and my girlfriend Karol Rosa and I went there. We liked it a lot and the intention was to be arranged by them and not live there. But it was an energy that infected me, to see those girls all training together and all as a family and still living only from training was everything I wanted even though I had to go through difficulties. So my master Gilliard Paraná told us that he wouldn’t tell us to leave our team, unless we wanted to. But if I went there he would put us at the top, but I would have to drop everything in my state of ES to be able to live in Rio. Living in the gym initially and living just training, and that was all I ever wanted listen, someone who believed in my potential. So as soon as we arrived in Rio my girlfriend and I did a lot of MMA fights one after the other, I had 5 fights in 7 months and won them all, signed my contract with Invicta with 7-0 on the record, won the best fighter award in the year and became the first in the national ranking. My girlfriend Karol Rosa was always my great partner in all this and always helped me a lot in training, today she is an athlete in the UFC and comes from 3 consecutive victories in the event, it was always me and her. We’ve been together since my first fight and I’ve been with her since her first fight, it’s been almost 8 years together.

Recently, you have found yourself in the top contender spot for the Atomweight title at Invicta FC. After fighting Zappitella back in May, how important is it to you to prove that you are still the top contender? 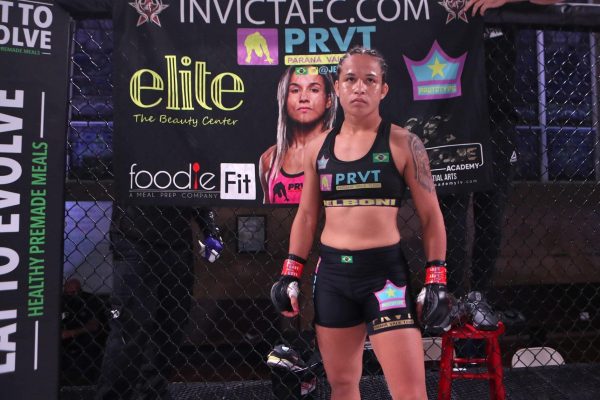 Of all the other fighters in the tournament, who do you see as your toughest competition?

Delboni: One of the athletes I know has great chances of reaching the final is Lindsay, she is experienced as I am, she has already fought big events and we even fought against each other where I won. But the other fighters are also very good anything can happen.

If you get the chance at the atomweight title again, will you approach fighting Zappitella  any differently?

Delboni: Yes for sure I would be much more aggressive than in my first fight with her. So that my victory is much more convincing.

What is the best advice you have ever gotten?

Delboni: The best advice comes from God, where it says in (Joshua 1:9) This is my command—be strong and courageous! Do not be afraid or discouraged. For the Lord your God is with you wherever you go.”

Thank you Jéssica, and best of luck to you. 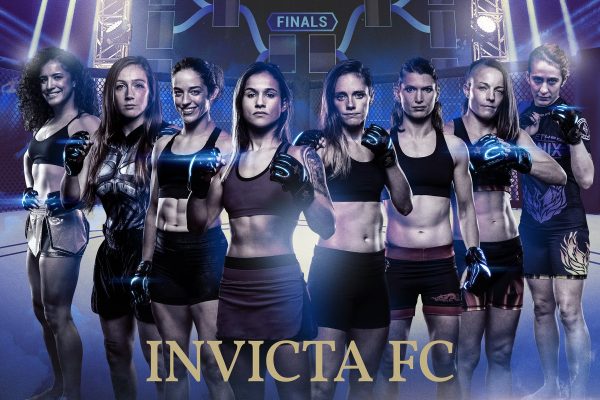 8 Women will enter, only one will leave the top atomweight contender.

Lacey Padgett (formerly Neher) is an award winning Blogger, Freelance Journalist and Content Creator specializing in the sport of MMA. Lacey was an active member of the Women’s MMA advocacy group that fought on behalf of female fighters to get a fair shot in the UFC. After a hiatus to raise her children, Padgett is back to writing about the sport she loves.