We have another incredible bout added to the UFC Fight Night 199 lineup, going down December 4, 2021, as light-heavyweight contenders Jimmy Crute and Jamahal Hill go to battle for a chance at a higher ranking.

We’re still awaiting word on the headliner, we don’t yet know who will be facing off in the five round main event, but we do have a couple other great match ups on the card such as: Matt Brown vs Bryan Barberena, Brad Riddell vs Rafael Fiziev, who are both kickboxing world champions, Brendan Allen vs Brad Tavares, and a couple others.

Not to mention their contrast of styles, which is very exciting to predict.

We’ll build our way up to that though.. 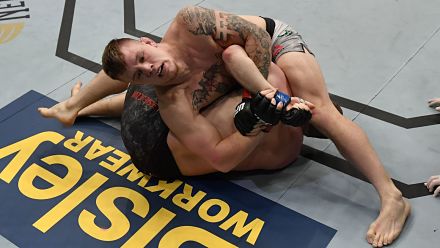 We first got notice of Jimmy Crute in July of 2018, where he competed on the Contender Series at just 22 years of age, securing a first round knockout en route to a UFC contract.

Just prior to that, he’d won the Hex Fight Series light-heavyweight championship via first round submission, and then defended it twice, both via five round unanimous decisions, before getting the call up to the Contender Series.

Once in the UFC, Crute debuted with a shiny 8-0 record, and he passed his first test with flying colors, submitting Paul Craig late in round three after a very entertaining back-and-forth fight.

If anyone knows who ‘Bearjew’ Craig is, they know this is probably Crute’s biggest win inside the octagon to date.

Next came a TKO victory over Sam Alvey, before Crute would be submitted by fellow BJJ black belt Misha Cirkunov.

Crute then submitted Michel Oleksiejczuk and KO’d Modestas Bukauskas back-to-back, both in round one, before losing to Anthony Smith via TKO (injury) in his last fight.

That was brewing up to be a good one, but it was called off due to Crute’s knee repeatedly giving out unfortunately.

We first got notice of Jamahal Hill exactly one year later than Crute, as he came onto the Contender Series in July of 2019, where he’d walk away with the third round TKO victory.

Prior to this, Hill, like Crute, had claimed a title, as he won the KOP light-heavyweight championship via five round

unanimous decision over a 19-7 opponent when he was just 3-0 himself.

As you see, both of these men are already champions, they have each been the five round distance before, very young in their careers mind you, and both won those fights.

Since his Contender Series victory, Hill defeated Darko Stosic in his UFC debut via unanimous decision, before finishing Klidson Abreu (TKO), a victory that was overturned due to a positive marijuana test.

This was followed up by a second round knockout victory over Ovince Saint Preux, before he was submitted by Paul Craig. Honestly, his arm got mangled in that fight, it’s a wonder he’s able to return this soon afterward.

Nonetheless, these are two of the brightest prospects in the entire sport of mixed martial arts, let alone the light-heavyweight division.

This may come as quite a surprise, but Hill is actually 30 years old, and he’ll be turning 31 next May. However, he has ten fights, he’s still so young in the game. Not to mention, he has great genetics that’ll carry him for at least five or so years.

Crute on the other hand is still only 25 years old, and he’ll be turning 26 in March.

Another thing that may come as a sizeable surprise, Crute stands 6’2” with a reach of just 72.5”, while Hill stands 6’4” and has an astounding reach of 79”. That may play a huge factor in this fight, especially when considering how slick Hill is on the feet.

That being said, Crute is worlds better on the mat, and he’s no slouch on the feet himself. He has great technique with everything he does and his power is amongst the best at 205 lbs.

In all honesty, both of these talents have as bright a future in this sport as anyone else competing in it today, and it’s a blessing we’re able to see them face one another. Each man presents huge problems to the other.