Joe Lowry ready to make a statement at CFFC 65

Just like millions of Americans, lightweight prospect Joe Lowry gets up every morning and goes to work. It might be a different site each week, but he still finds time for the gym. Joe is a dedicated and proud Sheet Metal Workers Union member (Local 19) in Philadelphia. He says building things has helped him to appreciate life and also given him tremendous support from his union family when he goes to his other job as an MMA cage fighter. 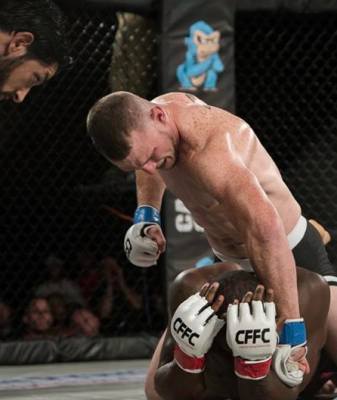 Lowry has known the grind since childhood.  He says it toughened him  being beaten up (with love) by his brothers as they grew into a tight family.  He went on to wrestle with a record of 47-2 as a senior in high school.  He then turned his attention towards MMA where he met Bob Peach, who is his head coach to this day. Brad Daddis and Nick Cottone (not the former UFC fighter Nick Catone), who was his high school wrestling coach, also have helped mold him into a top prospect with his sights set on the next level.

When I asked him if he would continue as a sheetmetal union member if he were to sign a UFC contract, without hesitation, he said yes.  He will always remain in his beloved Local 19, even if he decided to take a 6 month leave to train for a big fight, he would still pay his dues and plan to eventually return.  This is the attitude that has made him successful.  Joe also made it clear that not only does he intend to be victorious, he enters the cage to finish fights. ” I don’t go out there to lay on people.  I go out there to get bloody, put on a show, finish fights!”

The Lowry-Pope fight is one of three title fights on May 20th at CFFC 65.  Please give a listen as Joe talks about his daily grind, how he got this point, and of course, his title fight.

By Doug Geller 23 mins ago