Whenever you talk about Jon Jones vs. Daniel Cormier, you’re talking about what has been possibly one of the greatest rivalries in the sport of MMA, for the simple fact that verbally, each time these are in each other’s midst, you can expect must-see entertainment. Although Jones has gotten the better of DC on both occassions they’ve fought, (though the recent victory was overturned in part to Jones failing his second drug test), you can’t deny when Jones and Cormier interact, it catches everyone’s attention.

And judging from the tweets Jones put out yesterday, it looks like our attention might be caught once again.

As the UFC prepares for probably it’s biggest card of the summer UFC 226 next month, the company posted a very interesting tweet that caught the eye of the former UFC Light Heavyweight Champion.

In honor of the upcoming superfight between Stipe Miocic and Daniel Cormier for the UFC Heavyweight Title, the question was posed should Cormier defeat Miocic at UFC 226 would he become the greatest fighter of all time? Upon seeing the tweet, an infuriated Jones replied taking the question as an insult insinuating the ignorance of the UFC for even considering his arch nemesis in the conversation. 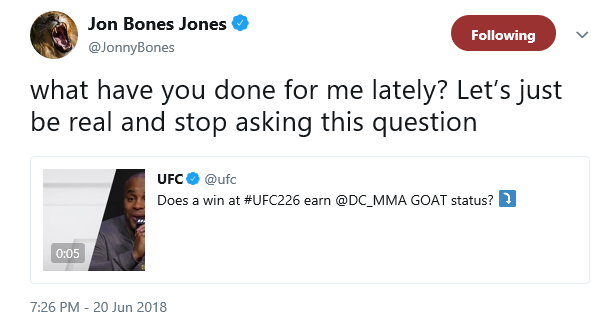 It’s pretty hard to argue Jones points here, cause after all, he is the only man to have ever defeated Daniel Cormier, the first was by unanimous decision, and the secnd was the aforementioned KO that was later reversed after Jones tested positive for anabolic steriods. It is because of his recent failures with the drug test and notable run-ins with USADA that have hindered him from reaching GOAT status in the UFC, thus creating the opportunity for Cormier to stake that claim for himself should be able to defeat Stipe Miocic at UFC 226

With all that being said, Jones is 38 hot knowing that the man whom he’s beaten on multiple occasions will now have the chance cement himself the right of being the Greatest of all Time in MMA at UFC 226, a position that Jones feels is rightfully his

Looking ahead to the future, Jones expresses he can’t wait to get back in the octagon to take out opponents again

By Adam Crist 14 hours ago

Shannon Wiratchai on Honorio Banario: “This is the comeback for both of us”

Mei Yamaguchi: “Hopefully I can fight on that card for the title against Angela Lee”