Jonathan Piersma and Ryan Sanders exchange words ahead of NEF 50

New England Fights’ main event reveal for NEF 50 unveiled a clash of styles, a cavernous gap in age and mixed martial arts experience, and a war of words unlike anything affiliated with the promotion in recent memory.

Sanders highlighted a joint interview with Steve Domenico on “The Room Podcast” by serving up a steady stream of verbal volleys, characterizing Piersma as one-dimensional and inexperienced. The 35-year-old former lightweight champ scoffed at suggestions that the smaller NEF hexagon could play into the hands of a grappler such as his opponent.

“I finish fights, and I guarantee you, I’ll put money on it, he’s shooting within the first minute. I bet you he’s not gonna strike with me,” Sanders said. “It’s definitely geared toward a grappler, but it’s all about footwork and the experience and stuff like that. I’m gonna put hands on him quick, and he’s gonna panic shoot. He doesn’t want to strike. He can’t strike. His striking’s dogshit at best, and he knows it.”

Piersma, who has registered all his pro wins by submission in the first or second round, offset only by a split-decision loss, didn’t completely dismiss Sanders’ scouting report but retorted that the veteran’s knowledge won’t equal power.

That inspired an immediate rebuttal from Sanders, who exclaimed, “You have no hands, Jon! Stop!”

Sanders said the five-minute rounds and five-round championship distance are well within his own comfort zone and completely foreign to the relative newcomer.

“I have 25 minutes to make his voice chirp, and I’ll do that, so it doesn’t matter where it goes,” Sanders said. “I’ve been everywhere. On my back, on top, standing up. I finish fights. I’m gonna make his voice chirp. I can guarantee that. I’m conditioned to go five 5s, but I’ll finish it well before that. He has no gas tank. He knows that.”

On multiple occasions during the interview, Piersma brushed off Sanders’ aural assault by painting it as bluster that he’s using to make himself feel better about the matchup.

“I’m training year-round. We’re getting ready for fights like this year-round, so no major change. Whether I finish him in the first round or take him all five, I mean, the longer the fight goes it’ll probably be worse for him,” Piersma said. “It’s nice to get in there and get this five-round experience. I don’t think it’s gonna go all five, but yeah, it’s a good opportunity. If it goes five, we’ll ready for that. If it goes one, we’ll be ready for that.”

Sanders, who is coming off a pair of impressive stoppages under the tutelage of world-renowned coach Primo Bellarosa since ending a 3½-year absence from the cage, doesn’t expect Piersma to veer from his grappling origins.

He postulated that his own nearly 15-year career of tackling all styles and levels of competition give him a distinct advantage over a foe who didn’t walk out for his first amateur MMA bout until 2018.

Piersma countered by questioning the cage-worthiness of Sanders’ recent opponents, continuing a run of 10 wins in his past 11 fights.

“He did fight a guy I train with. I kinda remember him from that,” Piersma said before Sanders interjected to ask a rhetorical question about the result. “You did win that fight, but that had no relevance to this. You can’t really take much from the recent ones, the last two fights where he came back. I don’t know where those guys came from. I think one guy you fought had 20 losses.

“He can sit here and say all he wants about my striking and this and that. He’s been around the game a long time, so he has a lot of fights, a lot of experience. The difference is I’m young. I want this more. I’m hungrier. He’s kind of at the point in his career where he’s gonna do another fight, another couple fights maybe, but he knows he’s not going anywhere at this point.”

On the contrary, Sanders views this reset as a new lease on his professional life, and the fight with Piersma as another building block in his final push to hook on with a worldwide promotion.

“In my mindset, every fight coming up is my biggest fight,” Sanders said. “I’m solely focused on this next fight. Nothing else before or after matters. It’s this fight. In that regard, absolutely it’s the biggest fight of my career, ‘cause it’s the next fight in front of me.

Sanders initially praised Piersma for having the courage to accept the challenge and travel to his backyard when others wouldn’t.

He later quipped that the Empire State camp will collectively rue that decision.

“I’ve choked out black belts in the cage. I’m gonna expose you, bud,” Sanders said. “Your managers messed up getting you this fight. You know what they’re gonna say to you that night? ‘I’m sorry, Jon. I messed up,’ They’re gonna say that.”

When Sanders challenged Piersma to look at “the pretty face” that’s “gonna be laughing at (him)” on fight night, the young rival finally sounded as if he’d had enough.

“The face ain’t gonna be looking like this after the fight,” Piersma said. “The first time I grab you, you’re gonna realize you’re fucked. All I’m gonna say to you is you should have picked a better retirement fight.”

After all that, the predictions were anticlimactic and, well, predictable.

“The cage is my home. It’s my sanctuary. It’s my happy place. I missed it, so I’m just glad to be back,” Sanders said. “I win. The title comes back to Vision Quest (Muay Thai). It doesn’t matter when. It doesn’t matter how. I’m gonna make his voice chirp.”

“This is gonna be my first time in Maine, so that’ll be cool. As far as going into his backyard, his crowd, I’m kindaused to that at this point. It feels like pretty much every fight for me up to this point,” Piersma said. “I’m gonna go up there. I’m gonna show people how good I am. I’m gonna take that title and go back to Rochester.”

Opening bell time for NEF 50 at Aura is set for 7 p.m. on Saturday, November 12. Tickets are available now at www.TicketMaster.com. 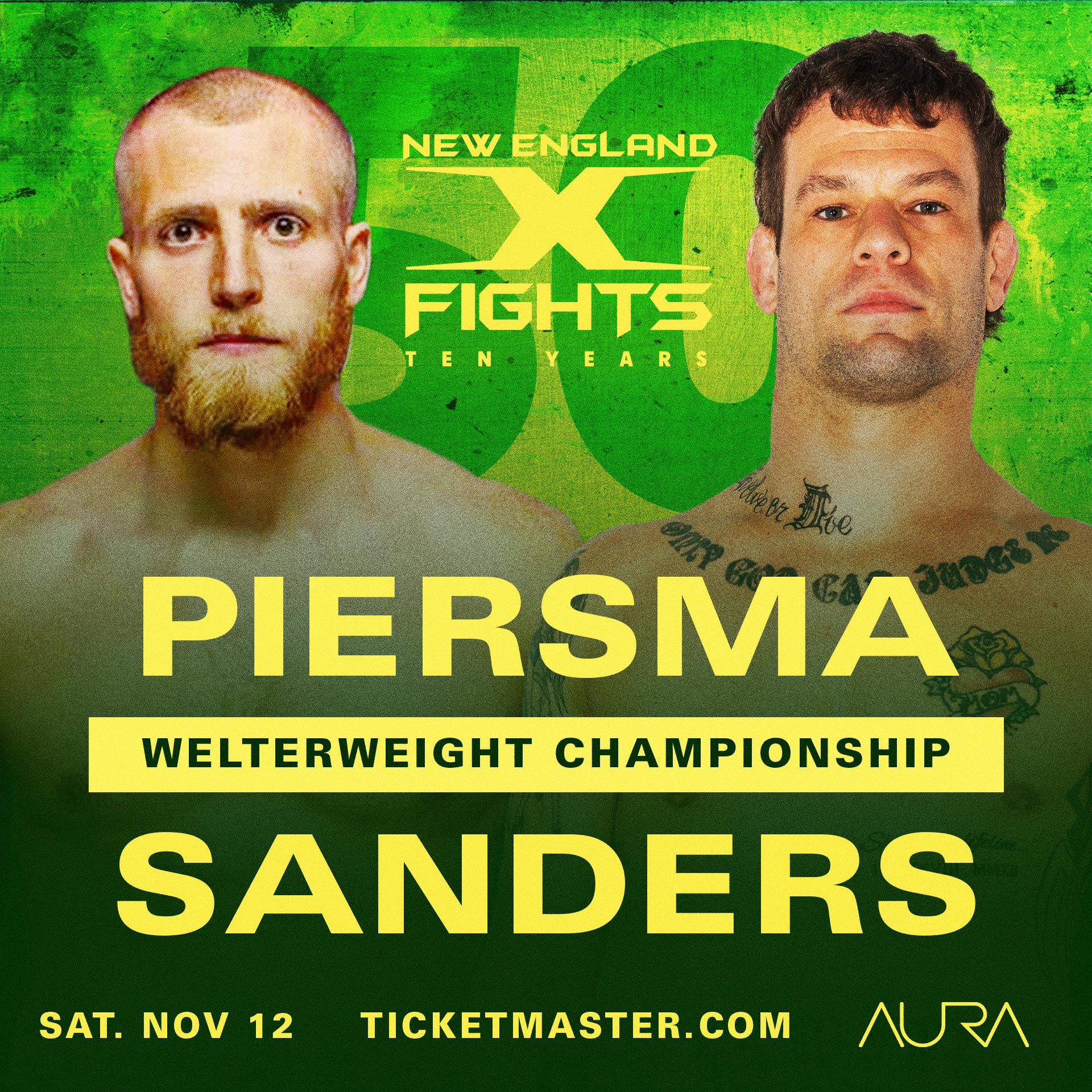