Julianna Pena: Stay out of trouble for one year; charges dropped

UFC women’s bantamweight Julianna Pena has one year to prove that she can stay out of trouble with the law and the assault charges filed against her back in December will be dropped.

According to an article on MMAFighting: Spokane Municipal Court recently granted the popular UFC women’s bantamweight contender a stipulation order of continuance in her assault case, according to a court spokesperson. If Pena stays out of trouble for the next year, the charges will be dismissed. 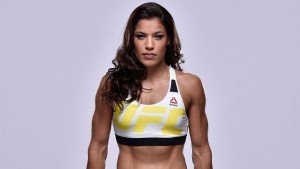 “Frankly, in my view, charges should have ever been brought in the first instance,” Pena’s attorney Carl Oreskovich told MMA Fighting. … “I don’t have any expectation that she’ll do anything other than comply with it and get the case dismissed.”

An alleged victim and two witnesses told officers that Pena and Josh Gow, her training partner on the Sikjitsu fight team, attempted to enter Zola’s bar after being involved in a street fight. Witnesses said Gow’s face was covered in blood from the brawl and the two wanted to use the bathroom to get Gow cleaned up. Bar employees told Pena and Gow that the establishment was closed and they could not come in, which prompted Pena to become “irate,” according to one witness.

Witnesses said that Pena kicked a bar employee in the groin and then, while outside the business, kicked the owner in the groin twice. Gow did not get physical with anyone, witnesses said, and was described as being clearly drunk. The two attempted to enter Zola’s again, witnesses said, but were locked out. Gow then rubbed his bloody face on the bar’s front window, according to witnesses.

Sgt. Eric Kannberg said in his report that he was responding to a “large fight” outside another bar, called Globe, nearby. He then walked to Zola’s and came into contact with Pena and Gow outside. Kannberg wrote that they had “obviously been drinking.”

On March 22, 2017, officials will look back into Pena’s case and if she doesn’t have any other arrests or wrongdoing, the two counts will be completely dismissed.

“It’s still under wraps, it’s just something that I would rather put behind me,” Pena told Submission Radio over the weekend, when asked about the assault case. “What I will say is that the matter was resolved and it’s all taken care of now. So I didn’t have to go to court, you know, I had a really great lawyer to take care of things for me and it’s over and done with.”

By George Glinski 7 hours ago

Bellator 263: Georgi Karakhanyan warns Kiefer Crosbie “It is very dangerous to fight someone like me”

By Joe McDonagh 18 hours ago