Not to our surprise, we have another banger this weekend at UFC 256, as former UFC Heavyweight Champion Junior dos Santos faces Ciryl Gane to open up the main card at 10pm ET/7pm PT.

This is a stellar match up between two highly elite strikers, and it’s a massive step up in competition for Gane. 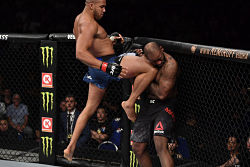 Gane’s fought just six times as a professional mixed martial artist, as opposed to the former champions 29 professional fights. Gane’s kickboxing background may aid him in the inexperience, especially considering this fight will most likely play out on the feet.

Junior dos Santos came to the UFC back in 2008 with a record of 6-1, and KO’d heavy favorite, and future champion Fabricio Werdum with a beautiful uppercut upon arrival.

He followed this up with four more knockout victories over Stefan Struve, Mirko Cro Cop, Gilbert Yvel, and Gabriel Gonzaga, before winning a unanimous decision over Roy Nelson, and defeating Shane Carwin via unanimous decision in a No. 1 contender fight. 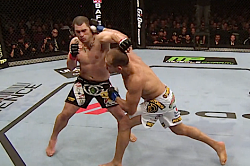 Dos Santos wasted no time in his title fight, as he KO’d Cain Velasquez just 64 seconds into round one. The new Brazilian champion defended his title against former champion Frank Mir, who he TKO’d in round two, before losing the belt to Velasquez in their rematch.

‘Cigano’ has mixed victories and defeats since this however. After he KO’d Mark Hunt with a spinning wheel kick, something none of us saw coming, he lost the trilogy bout to Velasquez, and he hasn’t been the same since.

Two five-round battles of taking nothing but serious amounts of damage will do that, just ask Renan Barao or Rory MacDonald. He did defeat Stipe Miocic after his trilogy bout with Velasquez, a very close decision that was, before being TKO’d by Alistair Overeem. 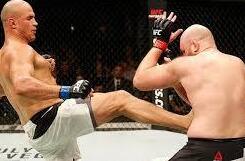 At this point, dos Santos had gone from 15-1 with 12 knockouts to 19-5, being finished in three of his last six fights, and having won five-round decisions in the three victories. Dos Santos followed this up however with back-to-back second-round knockout victories over Tai Tuivasa and Derrick Lewis.

‘Cigano’ is now on a three-fight skid, having been finished by Francis Ngannou, Curtis Blaydes and Jairzinho Rozenstruik, all three via knockout. He didn’t look terrible in any of those fights per se, but one thing was evident walking away from those three fights, he can’t take the same amount of damage he once could. 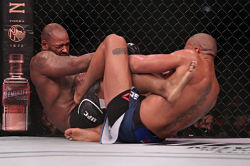 Ciryl Gane is a truly special specimen of the sport. He’s gone just 6-0 thus far into his career, including a 3-0 run so far in the UFC. To our surprise, he won his first two promotional bouts via submission, one of which was via arm-triangle choke in round one, and the other via heel hook in round three.

Since then, he’s fought just once, where he defeated Tanner Boser via unanimous decision. It wasn’t the most entertaining fight, but Boser was 17-5-1 coming in, and a former five-time Unified MMA Heavyweight Champion coming in. Gane was out-experienced by far, but still managed to win the universal 30-26 scorecard.

Gane too, like Boser, and like Junior dos Santos, is no stranger to being champion. He won the TKO Heavyweight Championship in just his first professional fight, and defended it twice before joining the UFC. 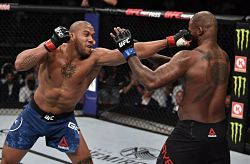 He also went 13-0 as a professional kickboxer. There were very high aspirations for him becoming the best in the sport, but he decided to cut that career short and focus instead on mixed martial arts, which has made things pretty exciting for us.

You’d think dos Santos’ experience alone would win him this fight, and it could definitely play a huge factor. Gane may have handily defeated the more experienced Boser, but Boser isn’t anywhere near the level of the former UFC Heavyweight Champion.

However, that doesn’t mean we can just count him out of this fight. He’s a threat to anyone in the heavyweight division on account of his striking alone, and dos Santos has been finished a good amount recently. Not to mention, dos Santos isn’t going to try and grapple Gane. 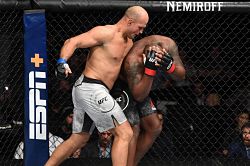 ‘Cigano’ may be a Brazilian Jiu-Jitsu black belt, but he has one lone victory via submission, a guillotine choke in his second professional fight. He hasn’t submitted anyone since 2006, well before he ever came to the UFC.

Even if dos Santos does try to grapple, it’s a wonder how much success he’ll have, he is not a wrestler.

He may, like always, just rely on his boxing, which is some of the best in the entire sport. Dos Santos is one of the few mixed martial arts talents that would do well in professional boxing, and he also has some good kicks to go along with it. 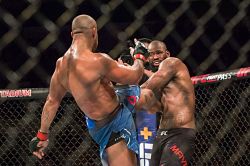 Gane doesn’t discriminate his attack, he throws everything from jabs and crosses, leg, body, and head kicks, flying knees, he does it all, and he’s great at it. With Gane being 30-years-old at this point, we’d think we only have a few years of him at his best.

He was however young in the sport of kickboxing before transferring to mixed martial arts. Obviously, he’s incredibly youthful in mixed martial arts as well, this means he should continue learning for some time, especially considering the extraordinary athlete he is.

This is a huge test to see where Gane is at in his career, and it’ll be very exciting seeing how it plays out!

Who do you see winning this heavy-hitting UFC 256 main card opener?

By Ryan Truland 1 min ago

By Adam Martin 15 mins ago

Tarps Off Sports announces ‘Brawl by the Falls’ to take place in Niagara Falls on Dec. 18

Anatoly Tokov on fighting alongside brother Vladimir at Bellator 269