On Saturday, March 19, 2016, King of the Cage returns to Embassy Suites Albuquerque Hotel & Spa in New Mexico for another spectacular evening of live MMA action, headlined by a Flyweight (130 pounds) showdown between Tim Sosa and Jimmy Flick and featuring some of the sport’s most ferocious competitors. 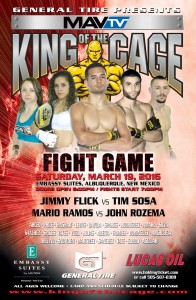 The Main Event, in the 130 lb. Flyweight Division, will feature local favorite Tim “Timbo Slice” Sosa from Albuquerque, New Mexico (NM Wildbunch) going up against Jimmy “Brick” Flick from Sands Springs, Oklahoma (Sheep Dog Jiu Jitsu), who has only lost once in his professional career.

One of the featured fights in the Women’s 115 lb. Strawweight Division will showcase the current KOTC Amateur Champion Cynthia “Sin” Arceo (5-1-0) from El Paso, Texas (US AK)

This event will be broadcast in over 50 million U.S. households on MAVTV (214 DIRECTV, 810 Verizon FiOS). Check your local cable provider for cable station in your area.

Doors open at 6:00 pm. and fights start at 7:00 pm. Reserve seating and Ringside tickets are on sale now. For more information or to purchase tickets, please visit www.holdmyticket.com or call (505) 507-0309. Event card subject to change.