Legacy Fighting Alliance is bringing the fire in 2018 with LFA 32. Headlined in the main event on this action-packed fight card is Brendan Allen, as he will be fighting for the vacant LFA Middleweight Championship belt. 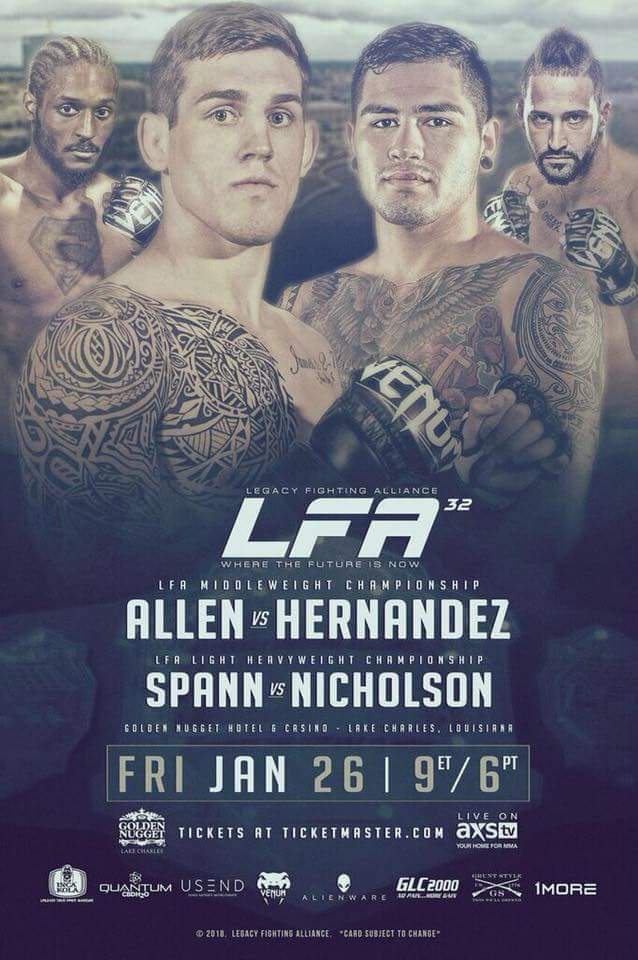 “All In” Allen’s championship opportunity should come as a surprise to no one, as he has progressively showcased his talent in his dominance throughout the LFA middleweight division.

With a record of 8-2 as a pro, Allen is currently ranked the number one middleweight of AXS TV Fights and FloCombat.

Brendan Allen’s determination and drive has pushed him through the challenges of achieving success, leading him to this pinnacle moment in his fight career.

“My determination to be different than everyone else is what drives me and has allowed me to accomplish what I have,” Allen said.

“I want to be the best because that it just the competitor in me. My drive is another thing that I feel separates me; I think that me fighting to make my family proud and to provide for them is what makes me hard to finish and outworked.”

Actions have spoken louder than words over the past two years, putting Allen in a class by himself aside from the rest of the middleweight roster.

Even when he is not fighting in the cage, the competitive spirit doesn’t seem to die out.

Allen would walk away victorious in that grappling encounter by ankle lock finish.

“No matter if its martial arts or who can eat the most food, I believe I was made to compete. Just recently I decided to get back to my roots, competing again in jiu-jitsu. I enjoy getting the opportunity to compete in jiu-jitsu whenever I can. I have participated in Submission Hunter Pro Series on many occasions and love the experience getting to test my jiu-jitsu against different guys.”

All of these events were unknowingly preparing Allen for his upcoming battle on January 26. Taking the belt that day won’t be an easy task because standing across from Allen will be Anthony “Fluffy” Hernandez. With an undefeated record of 5-0, Hernandez will be making his LFA debut, as he looks to dethrone Allen and become the middleweight champion.

Allen impressive submission victory over Chris Harris at LFA 18 showcased an evolved competitor capable of finishing a fight from any position. Taking valuable lessons away from the confrontation against Harris, Allen’s current training the Roufusport Fight team has put him in a setting surrounded by world-class competitors that are assisting him in preparation for his title fight.

“Anthony Hernandez is a game opponent and seems well rounded but we have fought two different calibers of opponents, and he looks small for the weight class. I switched things up for the better and went to the best gym in the world at Roufsports. I now have the best teammates, and I feel like a whole new fighter. I hope to show the new me January 26, and if I do, I will put on a hell of a show and get the W.”

Becoming the LFA Middleweight champion will add another accolade to Allen’s already impressive fight resume.  However, for Allen capturing the title is just a small stepping stone that will pave the way for his future ambitions of competing in the UFC. The UFC has had their eye on Allen’s talent for quite some. This makes the stakes going into this fight at an all-time high as winning is not an option, but a must for Brendan Allen.

“Winning to me is just another notch in my belt and will show the evolution as well the decisions to sacrifice time away from my family to make a run at this dream of mine was the right decision. I think a win will defiantly get me the call from the UFC.”

The undefeated record of Hernandez against potential UFC candidate Brendan Allen for the LFA Middleweight title, this is going to be an exciting match fight fans wouldn’t want to miss!

Zak Ottow talks difficulties of the regional scene, path back to UFC

Shawne Merriman Picks Up Where He Left Off With LXF 5

By Kyle Carroll 15 hours ago

TJ Dillashaw returns to edge Cory Sandhagen in 5-round war