On May 3, for the second time, Legacy Fighting Alliance will be in Vail, Colorado,  and for this trip they’re bringing a flyweight main event.

The event will be LFA 65 and the headliner has UFC vet Joby Sanchez taking on former title challenger Brandon “Raw Dawg” Royval. The match-up pits two of the southwest’s top gyms against each other. Sanchez from JacksonWink in Albuquerque, New Mexico, and Royval from Factory X in Ingelwood, Colorado.

Sanchez is coming off a unanimous decision victory over Demetrius Wilson at LFA 58. The Los Lunas, New Mexico firefighter fought five times in the UFC and also had two successful efforts on Dana White’s Tuesday Night Contender Series. On the momentum of a three-fight win streak, Royval earned the short notice call to replace injured LFA Flyweight champion Miakel Perez at LFA 53, facing Casey Kenney for the interim title belt. Kenney would win a decision and now Royval looks to get back in the win column in the building where he scored a 40-second win over Jerome Rivera.

The co-main event is in the featherweight division with Jose “Chepe” Mariscal squaring off with Fernando Padilla. This will be Padilla’s fourth fight for LFA, which includes an LFA 58 TKO of Donald Sanchez. Mariscal comes in riding a three-fight win streak that includes a decision win over Youssef Zalal at LFA 57.

Speaking of Youssef Zalal, he will be back in the LFA octagon taking on Matt “The Stripling Warrior” who has won three of his last four fights. The last announced bout is a women’s strawweight contest pitting unbeaten Pauline Macias against Sarah Shell. 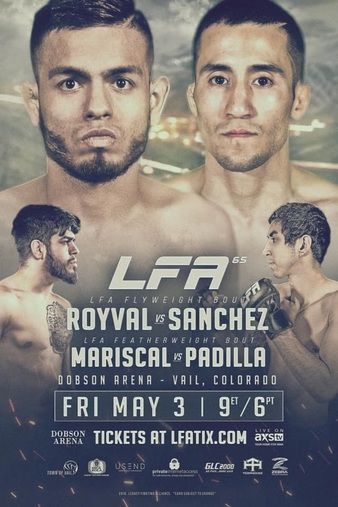