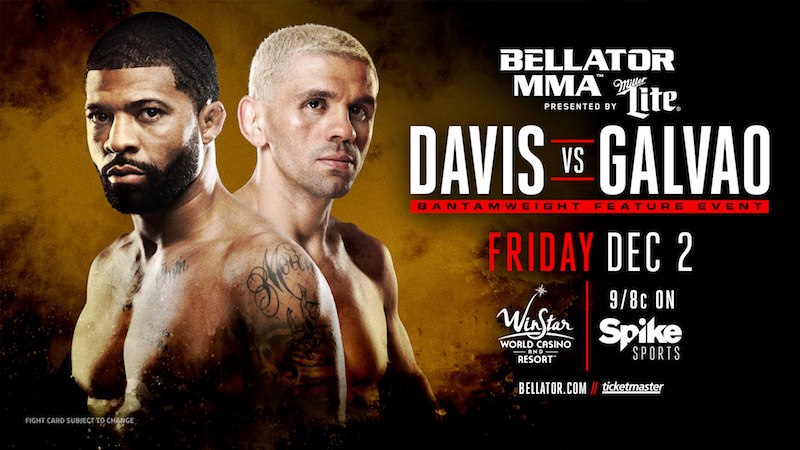 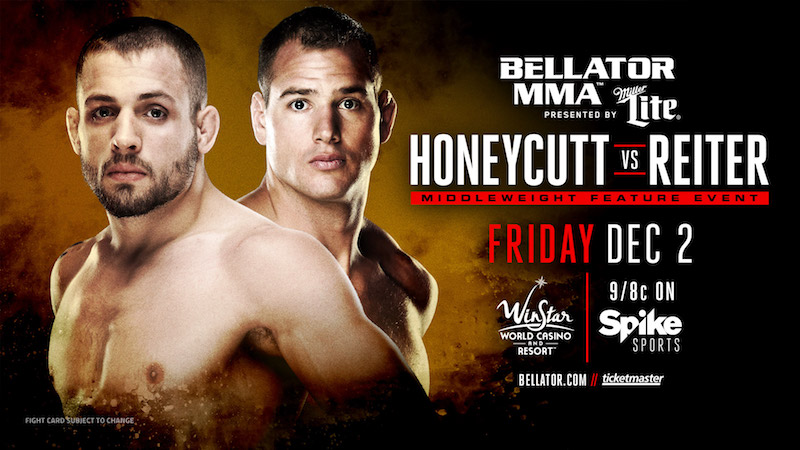 Tickets for the unique doubleheader event start at just $45 and can be purchased at the WinStar World Casino & Resort Box Office, as well as Ticketmaster and Bellator.com.

Brazilian superstar Marcos Galvao returns to action having won seven of his last nine and is ready for another push at the division’s belt. Hailing from Amazonas, Brazil, the illusive “Loro” has only been finished once in the past seven years, while conversely finishing his opponent in five of his 11 wins over that same period. Now Galvao returns to WinStar World Casino & Resort, the same venue where he fought and defeated Joe Warren for bantamweight gold at “Bellator 135.” Subsequently, Warren will also prepare to compete at “Bellator 166: Dantas vs. Warren 2,” as he and Eduardo Dantas will face off in the main event. Needless to say, the 34-year-old Galvao will have tremendous motivation to win, as the division he once championed dominates a stacked main card in Thackerville.

Davis enters the contest for the fifth time under the Bellator MMA banner, earning victories in three of his first four bouts with the promotion. The 35-year-old bantamweight has finished his opponent in 15 of his 23 career wins, including 11 in the opening round. A winner in seven of his last nine contests, the Kansas City, Missouri native consistently finds himself amid conversation with the division’s top contenders. Davis hopes to replicate the same success that he had in his most recent victory over Hideo Tokoro at “Bellator 135,” where his split decision win was labeled Yahoo! Sports’ “Best Fight of the Half-Year.” The former Pratt Community College wrestling coach now faces an opportunity to climb the ranks in a tasty matchup against one of the game’s best.

A six-fight veteran of Bellator MMA, Honeycutt made a lasting impression in his first two appearances under the promotion, recording back-to-back knockouts. Fighting out of Fresno, Calif., the 28-year-old knockout artist began his professional career with an impressive streak of six consecutive victories, including five finishes and four knockouts. “The Cutt” made a successful transition to the welterweight division in his Bellator MMA debut in 2014, before returning to the middleweight class in his most recent win over Mikkel Parlo at “Bellator 156.”

After making his professional debut in 2011, Reiter collected sixteen wins before surrendering his first career loss. The 29-year-old New Yorker competed mainly in Peru early in his career, fighting under the direction of Inka Fighting Championship, before joining the Bellator MMA fray in 2014. Since making his promotional debut for the Scott Coker-led organization, “The Hunter” has added three more victories to his already impressive résumé, as he quickly finds himself among the division’s elite. With nine of his 17 career wins coming by way of knockout or submission, Reiter hopes to add to that total with another finish in the first of a two-night special doubleheader in Thackerville, OK. Standing at six feet three inches, Reiter will look to expose his opponent Honeycutt with a significant advantage in both height and reach.

By Brady Briggs 8 mins ago

By 'Beautiful' Bob Meloni 37 mins ago