UFC Hall of Famer Mark “The Hammer” Coleman was never one to shy away from a fight, except on one occasion. He shared the negotiations in an interview with MMA TRUFAN.

“All of a sudden Pride calls me and says ‘Will you fight CroCop?’ I said, ‘Hell no.” Coleman continued, “I never said no to a fight but, this was one of the first fights I can remember saying no!”

The 2000 Open Weight Grand Prix Champion didn’t have an issue with fighting Mirko “Cro Cop” Fillipovic but he was upset that he wouldn’t have enough time to prepare.

“I said, ‘I’m not fighting Cro Cop in three weeks. Are you serious?’”

Coleman explained that the people at Pride were determined to find an opponent for the Croatian striker. 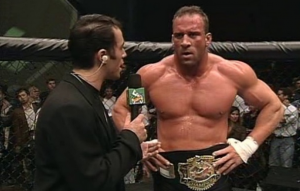 “They were like ‘Oh come on Coleman we need you! We need you to fight this guy! We have nobody else, somebody got hurt.’”

Mark was in no condition to take on the former K-1 World Champion at the time due to a neck injury.

The now defunct Japanese organization decided to persuade him financially.

Coleman suffered the second knockout loss of his career to Cro Cop a few weeks later at three minutes forty seconds into the first round.

Hear the entire MMA TRUFAN documentary on Mark Coleman below.