Miesha Tate to Serve as Grand Marshal for NASCAR Race

Before she defends her UFC bantamweight title at UFC 200, Miesha Tate will serve as the grand marshal for the FireKeepers Casino 400 NASCAR race on June 12 at Michigan International Speedway. 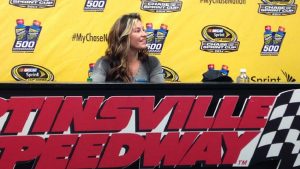 “I’m excited and honored to be the grand marshal for the FireKeepers Casino 400 at Michigan International Speedway,” Tate said in a released statement. “There are a lot of things I look forward to doing at the track, but to give the command to start the engines is at the top of my list, for sure.”

“We are thrilled to have Miesha Tate serve as the grand marshal for the FireKeepers Casino 400,” MIS president Roger Curtis said in the statement. “A lot of our guests are fans of the UFC; I certainly am. And it will be exciting for us to share all the great things about NASCAR at Michigan International Speedway with her and really treat her to a thrilling event in our ‘octagon.’”

On July 9 at UFC 200 in Las Vegas, Tate will defend against challenger, Amanda Nunes.  Tate beat Holly Holm in March to claim the UFC title.