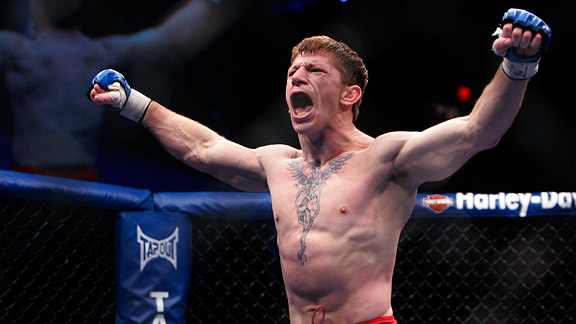 Tony Reid – If someone told you 20 years ago that you would be doing what you are doing today, what would you have told them?

Mike Brown – “I never dreamed in a million years that this is how my life would turn out. When I was growing up my parents always had jobs they didn’t like. I would complain about school and they would say “Get used to it because life sucks and it gets worse when you get older.” I thought wow, life is rough. I didn’t think anybody enjoyed their job. Buts amazing that you can actually do something you love for a living.”

Tony Reid – If you could choose one fight from your career that every MMA fan should see which one would you choose and why?

Mike Brown – “The first one with Urijah (Faber). It was the crowing moment of winning the title and being considered the number one guy in the world at the time. I had some other great fights but I would go with that one.”

Tony Reid – If you could fight anyone in any weight class who would you choose to fight and why?

Mike Brown – “I would have to say Brad Pickett (laughs). I would fight Brad in a second. It would be a one sided beatdown. I would beat him into submission. I visualize him tapping to strikes. So, is that a TKO or submission? It might be both. It would be around the 90 second mark if he ran long enough.”

Tony Reid – As a fan of the sport who are your favorite fighters to watch?

Mike Brown – “As far as old school fighters I would probably say Genki Sudo. Not because he was the best fighter in the world but because of his showmanship. He would pop and lock in the middle of a fight. I also like watching Brad (Pickett ) fight. I like watching Thiago Alves fight. I like Fedor (Emelianenko). Names are escaping me right now but there are a lot of guys I like watching.”

Tony Reid-If you could only choose one costume or outfit to wear to every social gathering for the rest of your life which one would you choose and why?

Mike Brown – “When I used to party more I would go to nightclubs with an afro wig and Napoleon Dynamite glasses on. It was pretty funny and made for good conversation so maybe I would go with that.”

Tony Reid – You have a lot of previous work experience including being a gas station attendant, a cashier at Sam’s, a professional mover, among others. Give us the good, the bad and the ugly of working in the real world.

Mike Brown – “I was also a produce clerk for a while. My worst job I ever had been working as a mover. I did it for one summer. It was just big, huge moves and it never ended. It was either crazy rich people with tons and tons of stuff or businesses with big awkward heavy stuff up and down staircases. It was the worst. But it really makes you appreciate the dollar. I never valet park because I think ‘Man, five bucks! That’s like an hours worth of work!’ I always think back to when I was making seven or eight bucks an hour working a really tough job. So it makes you appreciate the value of a dollar.”

Tony Reid – Can you talk about the meaning behind and the significance of the tattoo on your chest?

Mike Brown – “I got it in 2007. It is memory of my mom who passed away. She was really into angels. She had a ton of angel knickknacks and angel this and angel that. I got it in memory of her. I’m not a religious guy. I don’t believe in angels. I love the idea and it would be really cool if she was an angel and was looking upon what I was doing. I’m more of a realist and don’t really believe that but it would be cool.”

Tony Reid – Who are the people that inspire you most and make you get out of bed in the morning?

Mike Brown – “I fight for my friends. It drives me. I have a small family but now I have created my own family, which I think is better sometimes. I pick and choose people I really like and bring them in close and create my own family. I like to make them proud. I think that’s why I do what I do and it gives me the drive to train hard every day.”

Tony Reid – What has been the most amazing thing you have seen in regards to the growth of the sport since the beginning of your career?

Mike Brown – “Oh, TV man. You can watch MMA almost every night. I was an MMA junkie back in the day. It was so long from one event to the next. It was like three months. When an event come up it was like Christmas. I wouldn’t miss an event. Now it’s as common as Major League Baseball on television. I always knew it would be really big but I never thought it happen that quick. I thought by the time I was old and dying it would be huge and everyone would watch it but it happened in six or seven years. It was much quicker than I thought.”