As session one wrapped up on ESPN U, Ohio State’s Kyle Snyder and Michigan’s Adam Coon are still on track to meet on the big stage at Heavyweight. The biggest upset of the first round came at the hands of unseeded University North Carolina 157-pounder, Kennedy Monday. Monday, son of USA Olympic Gold medalist Kenny Monday, defeated No. 2 seeded Missouri Wrestler, 8-6. Monday’s victory puts a huge dent into the chances of the Tigers team finishing Top 5. 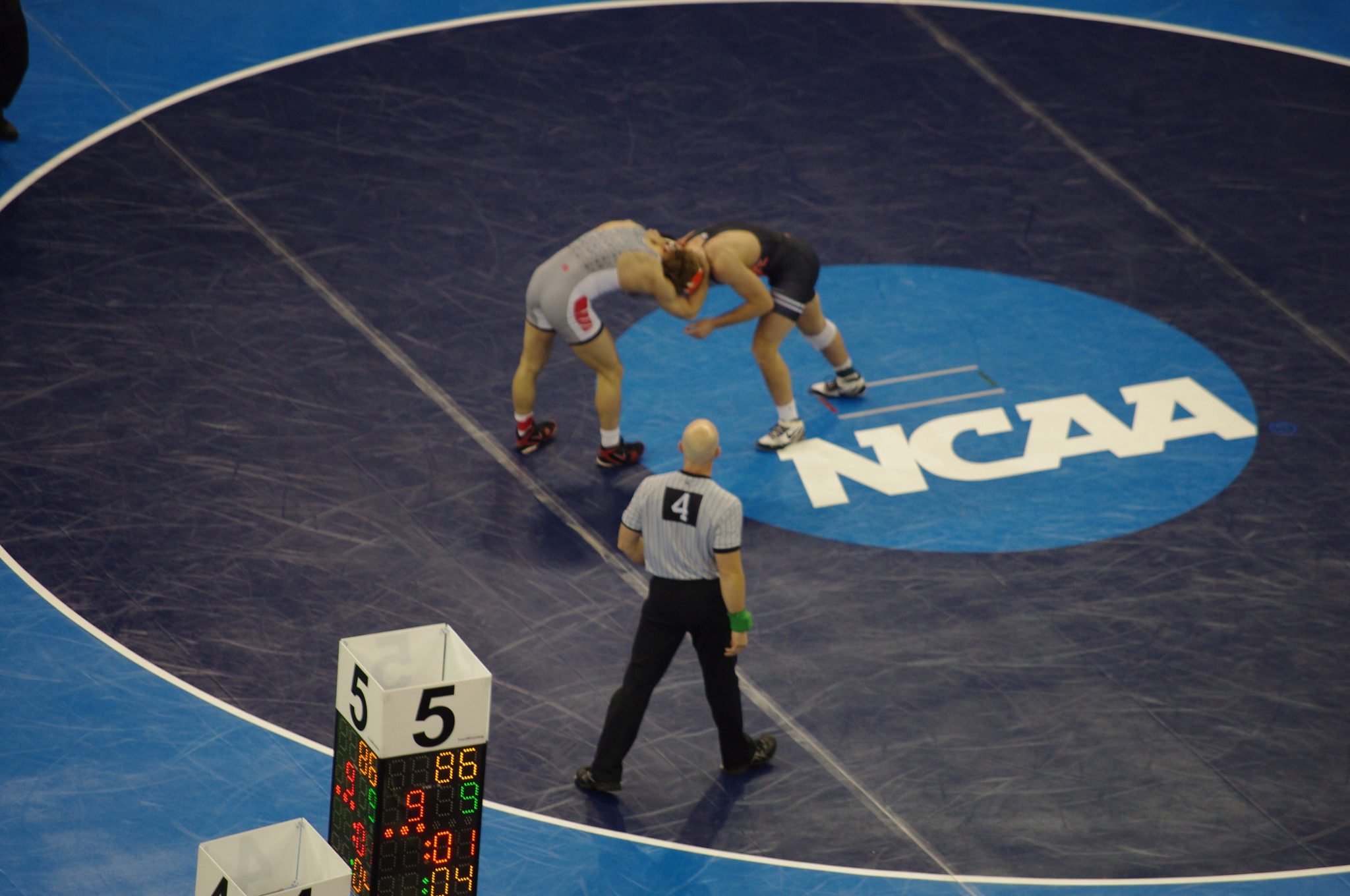 Penn State also took a major hit when their 141-pounder, Nick Lee fell by fall (2:13) to Ryan Diehl of Maryland. Lee’s loss makes the uphill struggle of Penn State’s National championship repeat tougher, as Iowa went 8-1 in round one and Ohio State, The favorites to win the National Title, advanced all 10 wrestlers to the second session.

No. 1 seed, Seth Gross of South Dakota State improves to the next round after a major decision over Matthew Schmitt of West Virginia, 15-2. On the other side of the brack, the Wolverines No. 2 seed, Stevan Micic also earned a major decision 16-5 over Zach Scherman of UNC.

Headlines are hoping for a rematch of the 2016 exciting match between Dean Heil (OK State) and  No.1 Bryce Meredith (WYO). Heil, seeking his third national championship title, suffering five losses entering the big dance, earned the sixth seed. Meredith going 30-1 on the season, earning a No. 1 seed in his bracket. Missouri’s Jayden Eierman stands in the way of Heil and would meet in the semi-finals if both wrestlers can continue to advance. Meredith will have to defeat his rival Kevin Jack of NC State, the No. 5 seed, in order to earn his rematch and title redemption verse Heil. Meredith won a via decision 5-1, while Jack scored a 10-0 major decision. Eierman and Heil both won decisions also by scores of 12-6 and 4-2.

The Hodge Trophy winner, Wrestling’s highest honor, Zain Retherford of Penn State extended the nation’s longest winning streak to 90. The Nittany Lion earned a tech-fall for his squad helping in team points, by a score of 16-1 (7:00) earning the tech-fall via the riding time point. Iowa’s Brandon Sorenson, the No. 2 seed, moved to round two via a decision 11-6. Ohio State’s (5) Hayes won in the first tie-breaker 6-5 over rival, Michigan’s seeded Malik Amine.

(1) Hayden Hidlay of NC State earned a 13-5 major decision victory to advance. While the upset thus far in the tournament comes at the takedowns of Kennedy Monday (UNC), with his 8-6 victory over Mizzou’s (2) Joey Lavallee. Duke’s (12) Mitch Finesilver, one of four brothers in the tournament for Duke, scored a major 12-3. Iowa’s Kemerer scored a huge Fall (1:38) for the Hawkeyes. (7) Micha Jordan (Ohio State) scored an important major decision for the Buckeyes, 14-5 to advance.

Two-time national champion, (1) Isaiah Martinez of Illinois scored a tech-fall at 4:21 by a score of 20-5. The defending national champion though, out of Penn State, (3) Vincenzo Joesph majored his opponent 15-4, allowing the rematch of last years finals in St. Louis to still be possible. Virginia Tech’s (2) David McFadden earned a decision victory 4-0 to advance.

Penn State’s defending 174 national champion, (2) Mark Hall scored a 12-2 major decision for the Nittany Lions. The No. 1 seed, Zahid Valencia of Arizona State advanced after a 14-4 major decision. These two undefeated wrestlers have the potential to meet in the finals. They met last year in the semi-finals, in a bout Hall won, eventually going on to win a title as a true freshman. (6) Bo Jordan of Ohio State won in sudden victory to stay alive winning with a takedown 4-2. Hall defeated Jordan in the finals in 2017.

(1) Bo Nickal, defending national champion out of Penn State, earned a major decision 16-4 over Martin Mueller of South Dakota State. Michigan’s (5) Abounader won 4-0 to move into the second round. Myles Martin, the No. 2 seed out of Ohio State earned a tech-fall (7:00) by a score of 24-9 to help the Buckeyes in the team race. Martin and Nickal met in the finals in 2016 at MSG, where Martin defeated Nickal. Since, Nickal has edged Martin out, winning each meeting this season. Last season, Nickal defeated the two-time champion, Gabe Dean out of Cornell to capture his first title by a score of 4-3. Dean’s brother Max is the nine seed and advanced to the second round by a score of 11-3.

Ohio State’s (1) Kollin Moore snuck away with a call going his way, which was an awful call, he won 12-8 to advance into the second round. Tanner Orndorff of Utah Valley scored a takedown on the edge of the mat, which the ref refused to give him. Moore went on to score a late takedown, after stalling the remainder of the match. Cornell’s (2) Ben Darmstadt won 3-0 to advance to round two. Penn State’s (5) Rasheed earned a major decision the Lions with a score of 13-5. Rasheed and Moore could meet in the semi-finals if both wrestlers continue to advance.

(1) Kyle Snyder, Ohio State’s two-time national champion, Freestyle World Champion, and USA Olympic Gold Medalist advanced to the second round with a 15-5 major decision victory. Iowa’s (5) Stoll earned a Fall (2:25) for the Hawkeyes, and Penn State’s AJ Nevills helps the Lions keep pace with a Fall (5:24). Michigan’s two-time All-American, (2) Adam Coon, the only man to defeat Snyder in the bracket, advanced with a 12-3 major decision. The Finals Snyder vs. Coon is still a go after round one. Who will win the rubber match if they can manage to reach the finals without hitting any bumps in the road?

Kyle Snyder of the Ohio State Buckeyes wrestles Conner Medbery of the Wisconsin Badgers during the championship finals of the NCAA Wrestling Championships on March 18, 2017 at the Scottrade Center in… Get premium, high resolution news photos at Getty Images

Updated Brackets After Round One –