Many mixed martial arts promotions have begun to return to action following a break caused by the COVID-19 pandemic, but the Professional Fighters League has yet to do so. That will soon change, however, as the league has announced its plans to host a new season in 2021.

According to a press release, the new season will begin on April 23 on ESPN 2. The league also announced events for April 29, May 6, June 10, June 17, and June 25. The regular season, playoffs, and championship will be aired on ESPN 2, ESPN Deportes, and ESPN+.

“We’re thrilled to announce an early start date for the 2021 PFL Season and we look forward to building on the positive momentum experienced in a historic first season on ESPN,” said PFL CEO, Peter Murray. “In 2021, the PFL will deliver an elevated, immersive, and interactive fan viewing experience incorporating expanded, real-time fighter data and analytics from our proprietary SmartCage technology, behind-the-scenes access, the return of ref cam, and more. 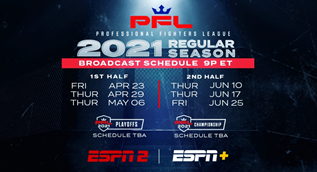 “Our champions return looking to earn another title, while a fresh crop of exciting new fighters will challenge for the top spot in MMA. Additional contenders will be unveiled in the leadup to what we believe will be the biggest season in PFL history.”

One name to keep an eye on, however, is two-time featherweight champion Lance Palmer, as his team recently threatened to file a lawsuit if he was not granted his release from his contract. This dispute stems from Palmer’s displeasure with his lack of activity.

Formerly known as the World Series of Fighting, the PFL rebranded in 2018 and has since held two seasons. The league has made itself stand out by providing fight fans with a different experience, one that includes a regular season, playoffs, and a championship, a format similar to that of other mainstream professional sports.

By Dylan Bowker 58 mins ago