UFC 160: Velasquez vs Silva 2 is a championship bout that goes criminally underrated in my estimation. The intersection of PRIDE and UFC’s Heavyweight Titles finally took place in what was a near 15-year odyssey.

It’s coming up eight years since this prizefight took place. I feel pundits and fans don’t look back on this Cain vs Bigfoot II with the level of magnitude and historical significance that it should receive.

Many legendary prizefights have taken place from MGM Grand Garden Arena in Las Vegas, Nevada. I feel like this contest should be more at the forefront of that discussion.

Below, I’m going to outline several facets as to why this I believe fight has gone unheralded. Also, what aspects of this undisputed title collision were significant and the multi-promotional timeline that extended back to the late-90’s.

The perception of Velasquez vs Silva 2 heading in

There was a pronounced lack of enthusiasm for the Bigfoot vs Cain rematch. In part due to its close proximity to the initial fight.

They were just shy of a calendar year removed from the first bout. The initial Cain Velasquez vs Antonio Silva encounter transpired at UFC 146 on May 26th, 2012 while the rematch occurred on May 25th, 2013.

Also, the first fight between Cain Velasquez and Antonio Silva was just not that competitive at all.

Silva was a UFC debutant at the time and Cain Velasquez buzz sawed through him at UFC 146. The first round ground and pound TKO was one of the more graphic bloodbaths in UFC history and many weren’t clamoring for a sequel between these two at the time.

The lineal PRIDE title finally becoming unified with the UFC heavyweight crown is a huge moment. A moment that dates back to the fall of ’98 as Captain America left the Ultimate Fighting Championship to compete overseas.

Enson Inoue submitted Randy Couture via a first-round armbar in their October 1998 contest for Vale Tudo Japan. This took place after Couture left the UFC as their reigning heavyweight champion after a contract dispute.

From that juncture, the lineal UFC heavyweight belt would further embed itself into the land of the rising sun.

Lineal titlist Enson Inoue would win in his PRIDE debut over Soichi Nishida via a sub-thirty second RNC at PRIDE 5. But he lost his sophomore effort in the promotion, dropping the lineal UFC heavyweight championship to Mark Kerr. This transpired in the first round of the 2000 PRIDE Openweight Grand Prix.

The Smashing Machine would drop the lineal belt in his following contest to Kazuyuki Fujita in the next round of the 2000 PRIDE Openweight Grand Prix. This would not mark the end of lineal UFC title switches within this PRIDE Fc tournament.

Ironhead in turn lost the lineal belt to Mark Coleman in the next round of that tournament. The same Coleman who ended up winning the 2000 PRIDE Openweight Grand Prix outright.

Coleman, the UFC’s inaugural heavyweight champ and now lineal UFC champ once more, went on to stop Allan Goes via TKO at PRIDE 13.

Mark The Hammer Coleman would end up getting submitted via triangle armbar by Antonio Rodrigo Nogueira at PRIDE 16 to pass the lineal UFC heavyweight torch.

Big Nog held the lineal UFC champion distinction and in the bout right after, became the inaugural PRIDE FC heavyweight titlist. Minotauro cemented himself as PRIDE’s first heavyweight king when he defeated Heath Herring via unanimous decision at PRIDE 17 in November 2001. 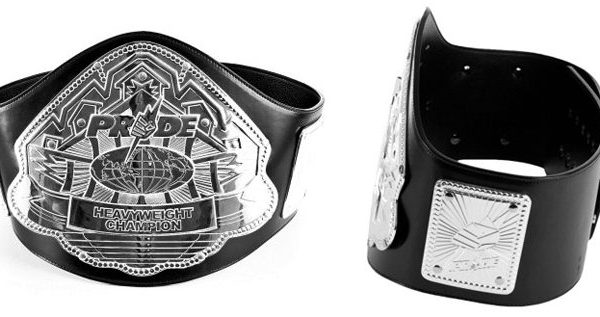 This was some true hybrid heavyweight hardware as the lineal UFC title and newly minted PRIDE heavyweight belts belonged to the same individual.

Nogueira held the dual distinction over a five-fight run that saw him submit former lineal UFC champ Enson Inoue, his legendary armbar against Bob Sapp, and avenge his lone career loss at that point to Dan Henderson.

This run lasted until PRIDE 25 when he tasted defeat to Fedor Emelianenko.

Fedor Emelianenko would hold onto the lineal PRIDE FC heavyweight championship for a fair bit after the promotion folded in early 2007.

The lineal PRIDE heavyweight gold would be contested for under the Bodog Fight, Affliction, and Strikeforce banners.

Fabricio Werdum became the lineal PRIDE titlist when he shocked the world with his first-round submission of Fedor in June 2010 for Strikeforce.

Werdum quickly dropped the lineal PRIDE crown in his next fight. This was a rematch to then-Strikeforce champion Alistair Overeem. This June 2011 prizefight was part of Strikeforce’s Heavyweight World Grand Prix.

Overeem would carry the lineal PRIDE gold with him into the UFC ranks. He eventually would lose that lineal distinction to Antonio BigFoot Silva via third-round knockout at UFC 156.

Bigfoot had then cemented himself as the lineal PRIDE FC heavyweight champion. Plus, the number one contender for the UFC heavyweight world title.

Historical comparisons of other PRIDE  vs UFC title unification bouts

The prior PRIDE vs UFC title unification bouts happened soon after PRIDE FC dissolving. Velasquez vs Silva II took place at a point where it had been over six years since the UFC had bought out PRIDE.

Dan Henderson vs Quinton Rampage Jackson as well as Dan Henderson vs Anderson Silva both had a lot of buzz around them. In this pair of cross-promotional unification bouts, everyone benefitted.

Rampage Jackson and Anderson Silva both continued to bolster their star power. They went on to become some of the more well-known, accomplished fighters in UFC history.

Dan Henderson also benefitted as much as he could have across back-to-back defeats. He achieved a level of notoriety from the pair of failed unification bids based on the competitive context of how he performed int these bouts.

At UFC 82, Henderson & Silva would fight for the Unified Middleweight title

The PRIDE Champion vs. The UFC Champion pic.twitter.com/JwSwghlRvS

The general audience’s dismissiveness leading into this bout was made worse by the repeat nature of the one-sidedness.

The first Velasquez vs Silva bout was lopsided and the second affair saw Cain bulldoze Bigfoot once again. Yet again finishing him via strikes in the opening frame of the contest.

While it looked less like a slasher flick the second time around, Velasquez finished him in less than half the time it took to dispatch Silva in their initial meeting.

In the case of Velasquez vs Silva II, there didn’t to be any residual momentum for either man afterward. A championship bout that had a forgone conclusion to some and it played out as such.

It just seemed like a fight that passed by relatively listlessly. Which is hugely underwhelming when considering the aforementioned historical context of this heavyweight affair.

PRIDE and UFC’s Heavyweight Titles came together in a visceral synergy that also saw Cain Velasquez go 2-0 in his series against Antonio Bigfoot Silva.

Fire up your UFC Fight Pass, type in UFC 160, and see if you can watch back this main event with a different level of appreciation.

With a richer sense of consideration for the history behind it and the decorated timeline that led up to it. An impressive lineage that was fleshed out by some of the greatest luminaries the sport of mixed martial arts has ever seen.