Cruickshank of Wayne, Mich. will set foot in the RIZIN FF ring for the first time, following a 4-year, 13-fight stint with the Ultimate Fighting Championship (UFC) that included wins over rival stars Yves Edwards, Erik Koch and Anthony Njokuani.

A two-time NCAA Division III wrestling national qualifier for Olivet College and a second degree black belt in Tae Kwon Do, the 5-foot-8, 30-year-old Cruickshank has gained admiration from fans worldwide with his set of explosive striking skills.

Sasaki of Hiroshima, Japan is a former Shooto Pacific Rim champion in the midst of a three-fight win streak.  In his last start on March 12, the 5-foot-9, 35-year-old who has earned 10 of his 16 career wins by way of submission, scored a thunderous, 40-second TKO on Won Sik Park with a storm of punches. 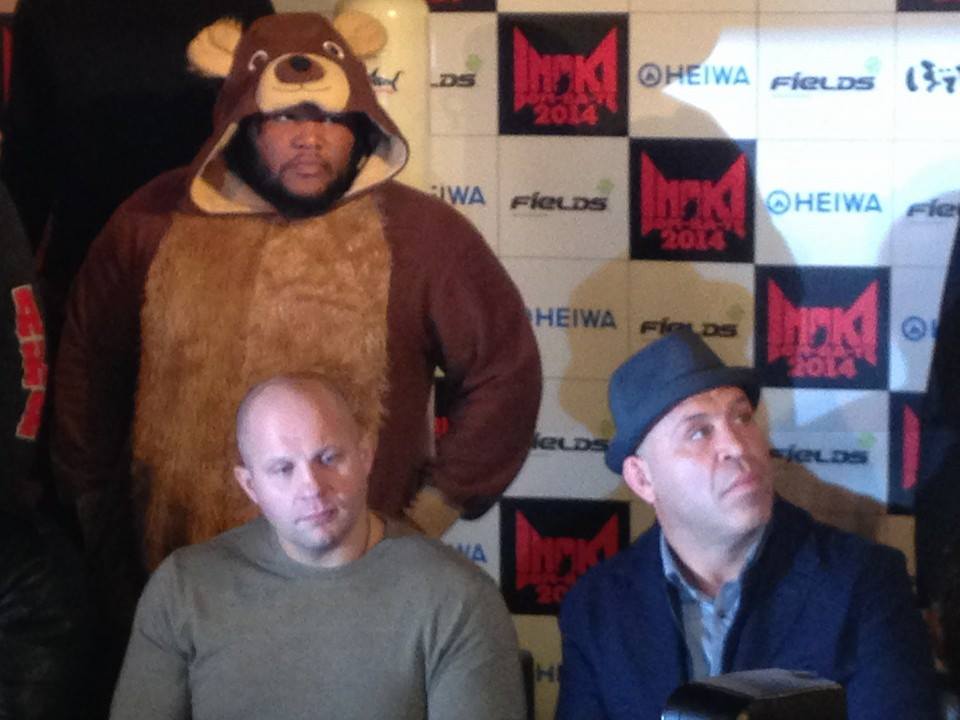 With heavy hands, incredible agility for his massive physique and an eccentric personality that spawned his “Huggy Bear” moniker, Barnett of Tampa, Fla., has been making noise in the MMA world of late.

The 5-foot-9, 29-year-old who makes his ring entrances wearing a full-body bear suit and celebrates his victories by performing breakdance moves and cartwheels in the ring, has earned 12 of his 14 career wins to date by way of (T)KO.  In his last start, he scored a first round TKO (punches) on Shinichi Suzukawa, in Tokyo on December 31

Sidelnikov of Stary Oskol, Russia is a 5-foot-11, 27-year-old former protégé of all-time MMA great Fedor Emelianenko.  On December 29, he made his return to the ring after a five-year hiatus, scoring a devastating, first round (2:23) TKO (punches) on Carlos Toyota at the inaugural RIZIN FF event in Saitama, Japan.

A six-time Brazilian Jiu-Jitsu world champion and ninth degree black belt, the 6-foot-2, 30-year-old Garcia of Los Angeles, Calif. via Sao Paulo, Brazil will return to the RIZIN FF ring for the second time after scoring a first round (2:36) TKO (punches) on Lei’d Tapa on December 31.

Malyukova of Penza, Penza Oblast, Russia is a former collegiate basketball star turned Russian MMA Championship and World Cup of MMA winner.  After amassing a near unblemished, amateur career record of 7-1, Malyukova made her professional debut on September 26, 2015, earning a unanimous decision over Tatiana Portova.

The 6-foot, 24-year-old Aukstuolis of Ukmerge, Lithuania is a national Judo champion who has been dubbed the “Lithuanian Werewolf” by Japanese fans who witnessed the young fighter use his aggressive style to knock out (punch)Bruno Henrique Cappelozza in the first round (3:32) of the RIZIN FF Grand Prix tournament’s quarterfinal stage of battle on December 29, 2015, before being ousted by eventual tournament champion “King Mo” Lawal in the semifinal round

All but one of Aukstuolis’ wins, thus far, have come by way of (T)KO or submission.

Singh of Punjab, India is a 6-foot-6, 28-year-old, former K-1 and RISE heavyweight kickboxing tournament champion who took his biggest risk to date when he stepped in the ring with Emelianenko in the main event of the RIZIN FF kick-off event on December 31, losing to the iconic Russian fighter by way of first round (3:02) TKO (punches).

Singh’s highest profile win to date came at the K-1 World Grand Prix 2010 Final event in Tokyo, Japan when he scored a first round (2:58) KO on Russian superstar Sergei Kharitonov with a right hook.

Another protégé of Emelianenko and the younger brother of M-1 Global light heavyweight kingpin Viktor Nemkov, the 23-year-old Vadim of Stary Oskol is a three-time national and 2014 world combat Sambo champion.

Nemkov reached the semifinal stage of the RIZIN FF Grand Prix tournament on December 29, finishing Goran Reljic by way of first round (2:58) TKO (punches) before being ousted from the eight-man playoff by Jiri Prochazka.

The 6-foot-2, 22-year-old Abrektsson of Sweden will make his RIZIN FF promotional debut as one of the hottest emerging forces in Europe.  With a fearless, straightforward style of offense, the Pancrase Gym team member has finished all four of his professional opponents inside of two rounds, via (T)KO or submission.

Priced from 100,000 yen, tickets for “Top Presents RIZIN Fighting Federation I,” which takes place at Nippon Gaishi Hall, are on sale and can be purchased online at Ticketbis.com.

In the main event, former PRIDE FC middleweight champion and prolific superstar Wanderlei “The Axe Murderer” Silva (35-12-1, 1 NC) will team up with a fighter to be announced soon, in a special grappling “tag match,” and battle a duo consisting of fellow legend, Kazushi Sakuraba, (26-17-1, 2 NC) and Hideo Tokoro (33-28-2).