The UFC Featherweight Championship will be on the line when Alexander Volkanovski seeks to defend his title against Brian Ortega in the main event.

In this highlighted play by play we will be featuring Nick Diaz and Robbie Lawler as they will meet in the cage 17 years later after their first fight.

The pair first met in April 2004 at UFC 47. Diaz had just kicked off his octagon career with a third-round submission of Jeremy Jackson following a successful run in WEC becoming the welterweight champion. Lawler was a young prospect, just three years into his MMA career.

Diaz stole the show in the first meeting as the once 20-year-old starlet finished Robbie Lawler with a stunning one punch knockout.

Lawler was the heavy betting favourite entering the fight encounter because he had already started to grow a fanbase with his relentless style, which his nickname ‘Ruthless’ evidently amassed from.

Diaz, 38, has not fought since losing a decision to Anderson Silva at UFC 183 in 2015 that was later overturned to a no-contest. 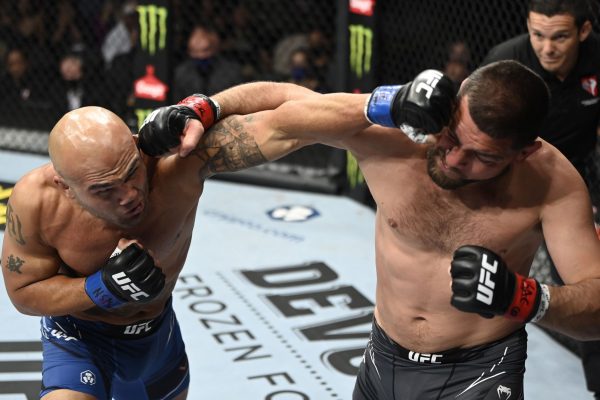 Nick Diaz vs. Robbie Lawler round by round:

HERE WE GO! Diaz opens up with a wild spinning wheel kick. Lawler opening up early with the hooks upstairs and to the body. Diaz rips to the body. A massive tight hook to the body lands from Diaz, Lawler returns with his own. Both guys are landing their strikes. Diaz steps in with a strike, Lawler slips and lands a beautiful left uppercut – Diaz shakes it off. Punches in bunches for Nick. Diaz is RIPPING to the body. Tight close dirty boxing from both men. AND THEIR GOES THE BELL! Phenomenal opening round.

Both men meet in the centre and straight back to where they finished. Lawler lands a big body shot and looks to momentarily bother Diaz – he gets on his bike and circles. The pair trade punches. This is a phenomenal pace. Diaz getting his boxing working again, both men are landing STILL! Lawler throwing the hooks over the clinch. Lawler rips to the body and throws a bomb up top, doesn’t seem to faze Diaz. Robbie walking down Diaz at the end of the round, their goes the BELL!

Lawler struts to the centre like a mad man. Diaz engages with a couple of hooks to the body. Right hand connection from Lawler and Diaz drops to the CANVAS! – Lawler walks away and pressures Diaz to stand up. Not looking good for Diaz as Herzog asks him to stand up, Nick SHAKES HIS HEAD – and the fight is waved OFF!

By Adam Martin 38 mins ago