Shawn Teed needs to wait a little longer for a rematch he always expected.

It did not come as much as a surprise when Cage Fury Fighting Championships [CFFC] announced the postponement of CFFC 82 on March 12. CFFC was just one of many promotions holding off events due to the COVID-19 pandemic.

Teed was scheduled to defend his heavyweight strap against Chris Daukaus in the headliner this past Saturday, March 21. Instead, the future of the rematch is unknown.

“It was just a matter of time before we ran across each other again,” Teed said. “Only time will tell with all this pandemic stuff. I’m working out, I’m running, I’m doing pushups and sit ups every single day, really anything I can do to get back into camp.”

Teed and Daukaus remain two of the top regional heavyweights after separating themselves from the rest. Both came close to winning the CFFC title, losing challenges to Bellator heavyweight Zu Anyanwu.

Teed eventually climbed his way back to another CFFC title fight. This time, claiming the strap by finishing Ben Reiter at CFFC 79 on Nov. 79. Daukaus made quite the run of his own by winning six of his last seven bouts.

Daukaus remained unbeaten for over three years till being caught by Anyanwu at CFFC 73 in March 2019. The loss snapped a five-fight win streak, one which started following his loss to Teed.

Teed’s professional debut featured a second-round submission victory over Daukaus at CFFC 53 on Dec, 4, 2015. Teed moved to 1-0 while Daukaus fell to 2-2.

Whether the rematch comes to fruition post pandemic, a lot changed since their first meeting.

“This will be my 10th fight, I think his 12th, I think we are not even near the same we were. He thinks he figured me out, I think I figured him out, we were going to battle it out in the cage,” Teed said. “I was really looking forward to this fight and I was expecting to finish him in the first round.”

Teed relied heavily on his jiu-jitsu in his professional debut. The heavyweight prospect is working to round out his game these days by putting emphasis on wrestling and striking.

He worked closely with UFC fighters Karl Roberson and Corey Anderson at Killer B Combat Sports Academy in Oakhurst. Along with training at Ricardo Almeida Brazilian Jiu Jitsu Academy in Robbinsville, he spent time at Apex Wrestling in Mahwah.

“I had zero striking at the time I fought him [Daukaus] and I had half-ass wrestling,” Teed said. “I have a heavy wrestling background, but I had just done jiu jitsu for years before that I stopped wrestling.”

Come one, come all

Shawn Teed is open to other options rather than Daukaus. Since the fight is postponed indefinitely, Teed is anticipating new contracts will need to be signed. This means more time.

The champ is ready to defend his belt, less concerned with who is standing across from him. Former UFC heavyweight Anthony Hamilton grabbed Teed’s attention through Instagram.

Hamilton asked for a potential matchup with Teed twice by responding to two of CFFC’s Instagram posts. The first featured a photo of Teed with the belt on Nov. 16, 2019, where Hamilton said, “I want the next shot.” 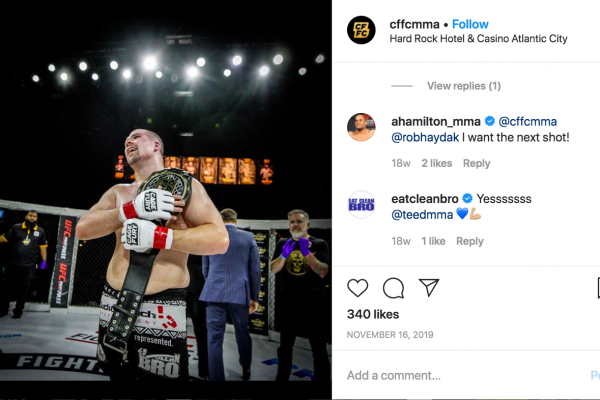 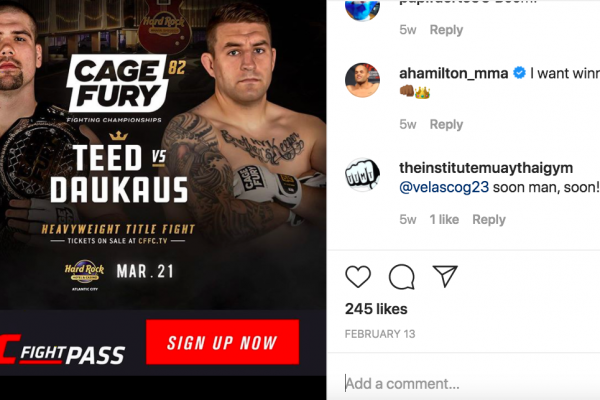 The promotion announced its upcoming heavyweight title fight on Instagram, where Hamilton responded, “I want the winner.”

Hamilton is a 10-fight UFC veteran with three victories inside the octagon. He lost his last four fights under the promotional banner, before being released. Hamilton rebounded by winning two-consecutive bouts outside of the UFC.

“On the regional circuit, there’s really nobody to fight. The one fight that did really make my ears perk up is after my last fight, Anthony Hamilton posted that he wanted to fight  me,” Teed said. “I was really happy with that, like ‘I can put a UFC guy on my record,’ but I don’t know why it didn’t come to fruition.”

Teed is waiting out the pandemic like everyone else. A fight which once seemed inevitable, is now a bout which may never happen.

Teed is hopeful he can fight as soon as May, but is unsure. Teed is focusing on what he can control; himself. Everything else can follow.

By 'Beautiful' Bob Meloni 8 mins ago