We have some pretty stacked Bellator cards coming our way over the next couple months, and Bellator 280 is no different.

This event is to go down live from the AccorHotels Arena in Paris, France, on May 6, 2022. 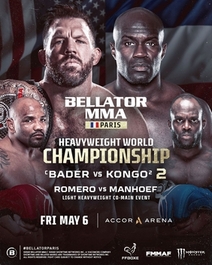 Bellator 280 is headlined by heavyweight champion Ryan Bader, who looks to defend his remaining title in the main event of the evening opposing French kickboxer Cheick Kongo.

This will be their second encounter, as the first unfortunately resulted in a no contest.

Co-headlining the event is a light-heavyweight match up of our dreams, this one between Yoel Romero and Melvin Manhoef, both of whom are ruthless knockout artists that’ve had a tough go lately.

The feature fight of the night comes in the lightweight division between former Cage Warriors lightweight champion Soren Bak and The Ultimate Fighter 22 veteran Saul Rogers. 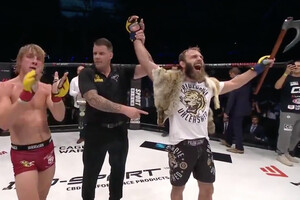 First, we’ll get into Soren Bak.

Bak comes into the bout on a seven-fight win streak with a record of 15-1, making it 2-0 thus far in Bellator. He doesn’t particularly stand out in any area, but he’s is a very well rounded talent. His ground game is great, good takedowns, control, and submissions, and his striking is quite good too.

If fact, he’s the last man to defeat another Cage Warriors champion, Paddy Pimblett, and did so over the coarse of five rounds in their title fight. He defeated Pimblett with superior striking and wrestling, and was able to survive a fully locked in rear naked choke very early in the fight.

Then on the other hand we have Saul Rogers, who’s also a very well rounded talent. He showed superior striking, wrestling, amazing strength, and good submissions to nearly win his season of The Ultimate Fighter.

Rogers, who hails from England, falsified some information on his VISA application and was denied the right to leave his country for the finale. He hasn’t fought in the UFC once, though he went 4-0 on the show, defeating season winner Ryan Hall, and also Billy Quarantillo, both of which are doing very well in the UFC to this day.

Rogers comes into the bout with a record of 15-4, most notably defeating former WSOF featherweight champion Georgi Karakhanyan last September.

Who comes out the victor in this epic lightweight match up?