Stephen  Thompson had a vintage performance this past weekend at UFC Vegas 17, as he defeated surging contender Geoff Neal via unanimous decision (50-45, 50-45, 50-45) in the five round main event.

It was surprising to see Thompson going into this fight as the underdog. Neal hasn’t fought anyone near the level of ‘Wonderboy’ in his entire career, the only way he’d beat him is in the striking department, and no one’s out-striking Thompson. 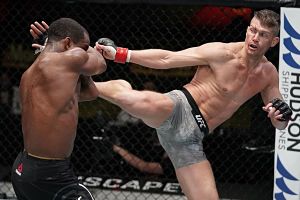 Neal is a pretty vicious striker himself, but Thompson’s on a different level than just about everyone in the sport.

‘Wonderboy’ has only ever lost one stand up fight, to former WEC & UFC Lightweight Champion Anthony Pettis, who he was dominating until he was cracked with a superman punch at the end of round two, and that was it, he was KO’d at 4:55 of the round.

Thompson went 57-0 as a kickboxer, 20-0 as a professional, and 37-0 as an amateur, before transitioning to mixed martial arts. While he started his career out with a 13-1 record, only losing to the much more experienced Matt Brown when he was just 6-0, he went through a bit of a rough patch afterward, going 2-3-1 in his next six. 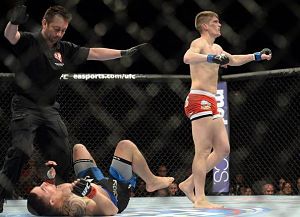 This got him to a title shot, where he battled then champion Tyron Woodley to a draw, and lost a majority decision in the immediate rematch. He then defeated Jorge Masvidal via unanimous decision, before dropping back-to-back outings to Darren Till (UD) and Anthony Pettis (KO).

The Till decision was very close as well, it could’ve went his way. That’s not to say he was robbed, because he wasn’t, it was a very close fight, not to mention, it happened in Till’s backyard of Liverpool, England. 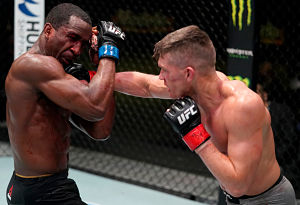 ‘Wonderboy’ rebounded from this with a unanimous decision victory over Vicente Luque, which happen on November 2, 2019. He hadn’t fought since this however, and at 37-years-old, turning 38 in February, we didn’t know how much he had left.

He showed us on Saturday he has a lot left however, and it’s great to see. For someone that has a karate style, you’d think their peak wouldn’t last into their late 30’s. They have to rely on speed, agility, accuracy, movement, all of which are things that get harder and harder to do as they get older. 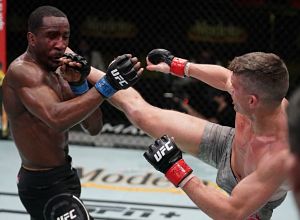 ‘Wonderboy’ looked like his normal self though, he hasn’t fallen off at all. He improved his record to 16-4-1 with this victory, and it’ll be very interesting seeing what the UFC does with him next.

The UFC has stated, or Dana White has stated rather, that the UFC is going to be ‘trimming some fat’, with over 60 cuts before the years end. We’ve seen a couple surprising names on that list already, and White said to expect more surprising cuts in the coming weeks. Will ‘Wonderboy’ be one of them?

You see, most people think the fighter would have to fight the rest of the fights on their contract in order to be released, but as long as the UFC pays them for those said number of fights, they don’t have to match them up with anyone. They can just buy them out of the contract. 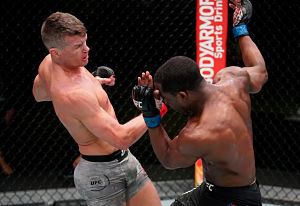 Thompson will probably never be champion, at least in the UFC, so we’ve got to expect that. Jose Aldo’s another one that fought at UFC Vegas 17, as is Anthony Pettis, that we just don’t know how their fighting future looks in the UFC.

Either the UFC decides to let Thompson go, considering he can beat most of the up-and-coming contenders, or they decide to keep him.

Bellator would be a great option for ‘Wonderboy’ should he get released. Stephen Thompson versus Douglas Lima, Michael Page, Lorenz Larkin, Derek Anderson, Sabah Homasi, Yaroslav Amosov, Neiman Gracie, any of those fights would be awesome to see. 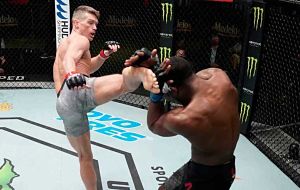 Or, if the UFC decides to keep him, now would be a good time for a Tyron Woodley trilogy, though it probably won’t happen. ‘Wonderboy’ is on a two-fight win streak, and Woodley’s on a three-fight skid, losing all 15 rounds he’s fought since last defending his title against Darren Till.

That’d be a good fight, or maybe the winner of Leon Edwards versus Khamzat Chimaev. Though Edwards has done enough to receive a title shot, he hasn’t fought in 17 months, and he turned ‘Wonderboy’ down, but accepted the Chimaev fight, after initially turning that down as well.

Many of us have felt bad for Edwards for some time now, but it’s hard to at this point. When you decline fights, you don’t get what you want, simple as that. 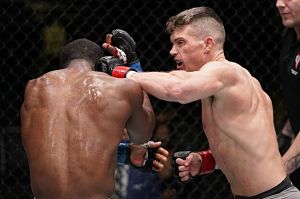 Lastly, Demian Maia wants one more fight before he retires, and what better match up than a karate expert versus a BJJ expert? Maia boasts a 4th-degree black belt in BJJ, and has been considered the best grappler in mixed martial arts for over a decade.

Maia’s prime followed him into his late 30’s and early 40’s, and he really learned how to wrestle at an elite level, in order to get his fights down to the mat.

Who would you like to see Stephen Thompson face next?

The Most Anticipated MMA Fights in 2022