Syndicate MMA, one of the premier mixed martial arts gyms in the greater Las Vegas area will hold a seminar this weekend to benefit the victims of the Las Vegas shooting that occurred last night.

A lone gunman released a rapid-fire barrage of bullets from the 32nd floor of a Las Vegas hotel late Sunday, killing at least 58 people and injuring more than 500 others attending a country music festival below, officials said.

It was the worst mass shooting in modern American history.

The shooter, identified by law enforcement officials as Stephen Craig Paddock, 64, of Mesquite, Nevada, fired shot after shot from his room at the Mandalay Bay Resort and Casino down on the crowd of about 22,000, sending terrified concertgoers running for their lives.

Syndicate MMA is located at 6980 W. Warm Springs Rd, Suite 180 in Las Vegas.  A minimum $25 donation is required and 100 percent of the proceeds will be donated to individuals affected by this tragedy. 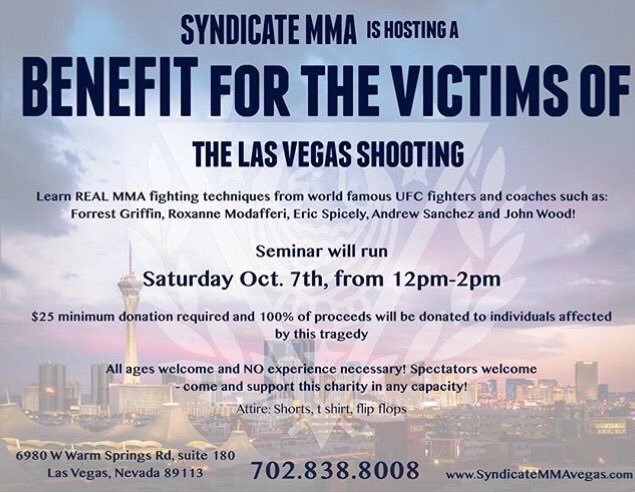