The boxing world has become quite the hotbed for young talent in recent years, and it’s been very exciting to watch. Just as we had the three kings at heavyweight for a good few years, Tyson Fury, Anthony Joshua, and Deontay Wilder, we have the four kings in lightweight boxing, Gervonta Davis, Ryan Garcia, Teofimo Lopez, and Devin Haney.

All four of these young guns are undefeated, all four of them are world champions at 135 lbs, and not a single one of them is even close to 30-years-old yet.

We’re going to take a look at each of their amateur and professional careers, all of their accomplishments in the sport of boxing, as well as their frames, ages, and how they fit into the 135 lb division in the coming years. 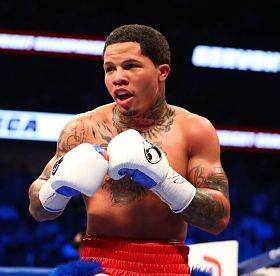 Gervonta Davis has become one of the biggest names and faces in the boxing world, and for a good reason. 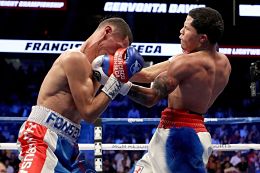 This young man is as dangerous as they come, especially for his weight class, thus the reason many call him ‘Mini Mike Tyson’. He doesn’t fight like Tyson, he’s much more elusive and diverse, but he’s got every ounce of that power Tyson had, only at 130-135 lbs, rather than at heavyweight.

‘Tank’ made his professional debut in February of 2013 after a very successful amateur career, winning 206 of his 221 total bouts, claiming numerous championships along the way. 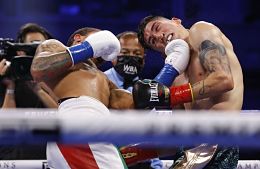 Upon turning professional, Davis made it to 16-0 before challenging for his first world title. Of course, still being undefeated today, he won that title, the IBF super-featherweight championship via TKO in round seven.

‘Tank’ defended his belt a single time before vacating it. Since then, he’s gone 6-0 with five world title victories. 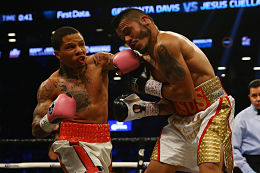 This includes his two most recent victories, where he TKO’d Yuriorkis Gamboa in round twelve, and where he KO’d Leo Santa Cruz with that uppercut from hell in round seven.

The Santa Cruz victory was perhaps the most impressive of his entire career thus far. Santa Cruz was 37-1-1, a 17-time world champion, and he’d only ever lost a majority decision prior, which he’d avenged in his very next outing. 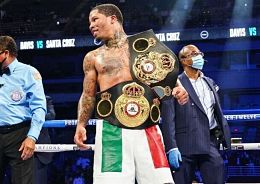 thing for him in his career. Mayweather goes as far to say Davis’ boxing skills are actually better than his power. At this point, it’s hard to deny.

As it sits today, ESPN has Davis ranked at No. 3 in the world at 135 lbs, just behind Teofimo Lopez and Vasyl Lomachenko.

The speed Davis possesses, along with his power and diversity of punches in his arsenal he can go to at any point during the fight, it makes ‘Tank’ perhaps the most dangerous lightweight boxer in the sport. He’s certainly the most dangerous super-featherweight in the sport, he can find that KO shot like no other.

Another thing that makes ‘Tank’ one of the most elite talents in the world is the fact that he doesn’t get frustrated easily. He gets tagged sometimes, but it never effects him, and he just returns one, two, or three even harder. 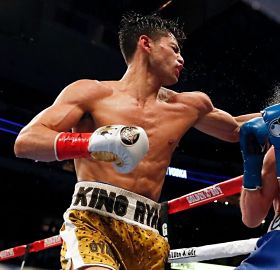 Ryan Garcia has also quickly become one of the biggest names and faces in the sport of boxing.

Of course, he has millions of followers on his social media platforms, which is part of the reason, but we’ve been waiting to see if he was a true fighter. We didn’t know, until his last fight that is. 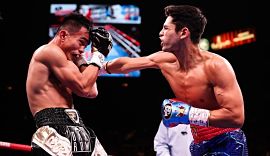 Garcia hadn’t really gone through much adversity until his last bout with Luke Campbell. After being dropped in round two, he came back to TKO Campbell with a nasty shovel hook to the liver in round seven, capturing the interim WBC lightweight championship in the process.

Considering he’s only been a professional since the middle of 2016, that’s quite astounding.

Now, Garcia still doesn’t have the best footwork, and his defense could use some fine tuning, but we found out he is a true fighter in his last bout. It’s 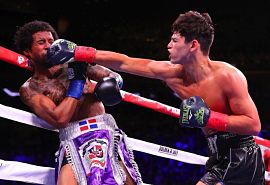 Garcia started out his career as an amateur, of course, winning 215 of his 230 bouts, claiming 15 national championships in the process. ‘KingRy’ now has Canelo Alvarez in his corner, with them both being under the Golden Boy Promotions banner. 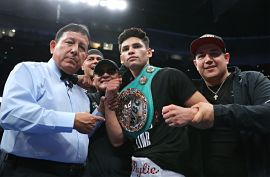 Alvarez is the No. 1 ranked pound-for-pound boxer in the world by nearly every media source, he’s a great asset to anyone’s corner. To think, Alvarez only ever lost one fight, to Floyd Mayweather Jr, when he was just 23-years-old, anyone would be lucky to reap the benefits of training with him.

Garcia has been very vocal of wanting the Gervonta Davis fight next, and there have even been talks of him even jumping up two weight divisions to face WBA welterweight champion Manny Pacquiao, though he’s now the mandatory challenger to undisputed WBC lightweight champion Devin Haney.

Garcia has some wicked power, especially for his frame, and as we’ve seen by now, he can take a good shot. ESPN has ‘KingRy’ ranked as the No. 4 ranked lightweight boxer in the sport. 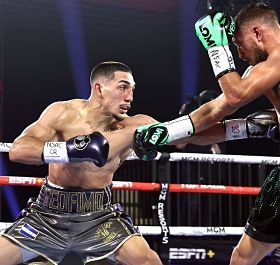 Teofimo Lopez has really taken the boxing world by storm recently. He started out his career winning 150 of his 170 bouts as an amateur, having success in some major tournaments he competed in. 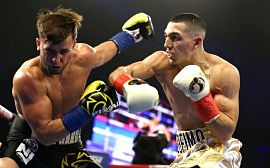 This included going to the 2016 Olympics, where he was defeated by an eventual silver medalist.

Now, just over four years into his professional career, he still has yet to lose.

He really shocked the boxing community in his most recent outing this past fall, as he defeated Vasyl Lomachenko via unanimous decision, defending the IBF lightweight championship, and capturing the WBA (super), WBO, and Ring Magazine lightweight titles. 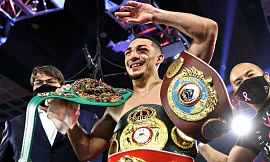 Most believed Lopez’ only shot at winning this fight was to catch Lomachenko early, but he didn’t. He out-pointed him throughout the entire first half of the bout. The decision was quite disputed, but don’t get it mixed, Lopez won that fight, the totals were just irrational.

It’ll be interesting seeing what Lopez wants to do from here. He did say he may end up moving up to super-lightweight (140 lbs), considering he’s a big lightweight. Nonetheless, he’s going to have success no matter where he goes.

Lopez’ power is really something to behold, and we just found out he has all the skill in the world needed in order to be the most elite 135 lb boxer on the planet. ESPN has Lopez ranked at No. 1 in the lightweight division, to no surprise. 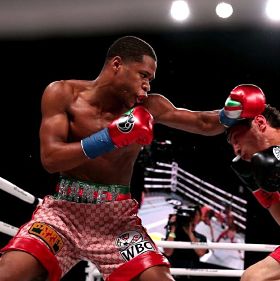 Devin Haney has flown under the radar to many as one of, if not boxings most elite lightweight fighter in the world. 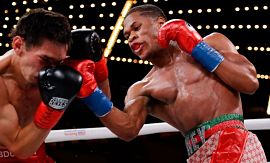 This would be because Haney’s far more technical of a boxer than a brawler, and his fights just don’t seem to garner too much attention, unfortunately.

However, he’s the WBC lightweight champion, as mentioned above. Considering Ryan Garcia is the interim champion, this is the fight that makes sense to make next.

This bout would give Haney the attention he so rightfully deserves, and it’d be a telling fight. Telling to see where they’re each at, and to see who’s 0 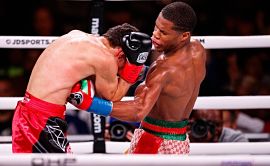 would be erased from their record.

He turned professional in December of 2015, winning 138 of his 146 total bouts amateur bouts. Notice, that’s nearly three years after ‘Tank’ Davis made his professional debut, and he has one more fight.

You know, it’s pretty remarkable how many elite 135 lb boxers we have in 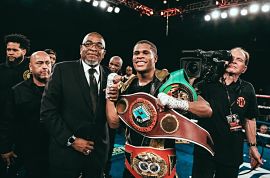 the sport today, and it’s even more astounding that the only one that isn’t undefeated is Vasyl Lomachenko.

Any of these four matched up with one another is an incredible match up, we can only hope they get all these fights booked within the next five or so years.

They shouldn’t be booked right away, of course, we can’t just get all the big fights in one year, then have no big lightweight bouts to make in the following years.

Haney is a very rangy, technical athlete, but also has some power to unload when need be. ESPN has Haney currently ranked at No. 5 at 135 lbs. 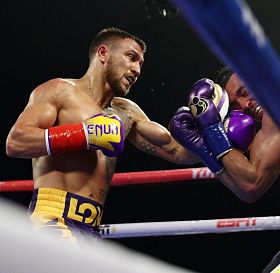 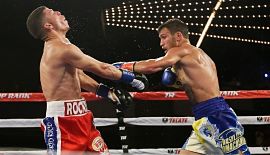 Lastly, the extra on this list, Vasyl Lomachenko was for some time on most peoples pound-for-pound list, sitting comfortably at No. 1, up until he fought Teofimo Lopez that is.

How could we not add him to the list?

Lomachenko is perhaps the most successful amateur boxer of all-time, and he had more anticipated of a professional debut than anyone else in recent memory. He won 396 of his 397 total bouts as an amateur, which is just madness. Who has almost 400 fights and only loses one of them? 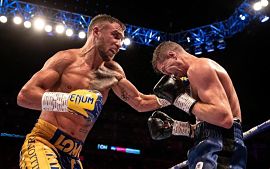 against the Russian opponent. Upon turning professional, ‘Loma’ won the WBO international featherweight championship in his very first bout.

He would lose his next bout, which was for the WBO featherweight championship, losing the bout via split decision. His opponent had well over 50 fights, and this was Lomachenko’s first time ever being scheduled for, and going twelve rounds.

Lomachenko won his next two bouts, one via majority decision, and one via 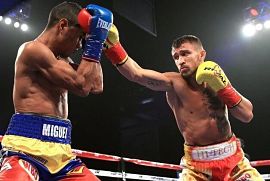 unanimous decision, improving his record to 3-1. Both of these bouts were twelve rounds as well, and we could tell he was much more adjusted after this. 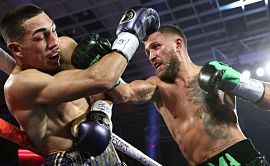 Lomachenko then TKO’d longtime top lightweight contender and champion Jorge Linares, who was 44-3 and on a 13-fight win streak. He won his next three bouts after this as well, with his most recent coming over Olympic gold medalist Luke Campbell.

Of course, his last bout showed him get defeated by Teofimo Lopez, which was quite shocking to everyone, and upsetting to some. Lopez was ready for 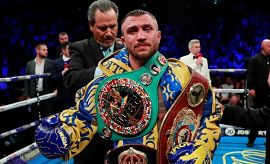 the footwork of ‘Loma’, but it’s not such a bad thing. This will make Lomachenko improve, now he’ll have an answer for his opponents’ answers.

‘Loma’ a smaller lightweight, but he’s certainly still one of the best in the world at 135 lbs. ESPN currently has him ranked at No. 2, right behind the man to last defeat him.

It’s kind of surprising seeing Lomachenko without any titles. Either he goes back to junior-lightweight, or stays at lightweight and attempts at regaining his belts. Either way, it’ll be exciting to see him get back in there! After all, he was coming off the longest layoff of his career going into the Lopez fight.