We had a number of shocking outcomes over the weekend in combat sports, starting with PFL 1 – 2021 on Friday, April 23. UFC 261 then followed that up with perhaps even more shocking outcomes, to our surprise.

The shockers in PFL 1 didn’t come at the same level of devastation as the shockers at UFC 261, but they were still incredibly surprising outcomes to say the least. 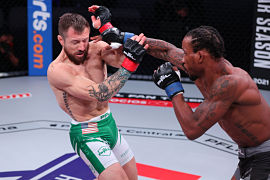 Palmer came into the bout with a record of 22-3, going an undefeated 10-0 under the PFL banner since its start in 2018. Jenkins was a PFL newcomer that came in with a record of 14-4, going 8-3 in Bellator prior.

Palmer is an NCAA Division I national champion second place, and is also a four-time All-American. Both men also placed in Big Ten Championships before. However, despite his wresting prowess, we’ve never seen anyone do that to 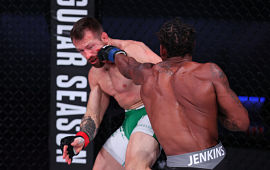 In fact, every single one of Palmer’s victories came because of his wrestling ability.

Not only that, but he wins every round of his fights in every fight he has, and he lost all three rounds handily on Friday. It was really something seeing that exact tide turn.

Two fights later, in the co-main event, two of the premier grapplers in the sport went at it.

Held has some of the very best submissions in the entire sport, especially with his leg locks. Schulte on the other hand is an elite Judoka, and has some of the best trips and octagon control in the sport.

Unfortunately, they didn’t grapple, this entire fight was played out on the feet, but it was a straight up barn burner!

These two slugged it out for three straight rounds, giving us an incredible

show, while the judges awarded Held the unanimous decision victory after a very, very close fight.

Schulte could have been given the nod without dispute, but nonetheless, it could’ve gone either way, and the second two-time PFL champion was dethroned in the first round at PFL 1.

lightweight champion Anthony Pettis as well. Collard hadn’t fought in MMA in two years, while Pettis had gone 2-2 in that time.

Collard did however start boxing as a professional in that time, and went 5-1 in 2020, defeating five touted prospects with supposed bright futures in the process.

Collard swarmed Pettis with his hands the entire fight, and especially with his size, it worked out beautifully for him.

Pettis didn’t look bad in this fight, he was actually looking very sharp with his kicks and especially his counter punches, but he just got overwhelmed. So badly in fact that he nearly got finished three times in round two.

‘Showtime’ did however land a vicious head kick, followed by a flying knee that landed flush with one minute left in the third round, but he couldn’t finish Collard with it, and Pettis has now gone 6-9 in his last 15 after opening his career up at 18-2.