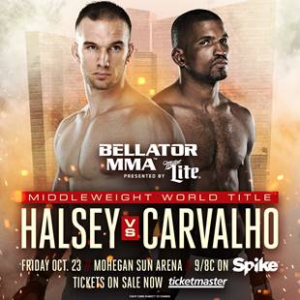 The main event of “Bellator 144: Galvao vs. Dantas 2” features a bantamweight title fight between Marcos Galvao (17-6-1) and Eduardo Dantas, (17-4). In addition, “Irish” Brennan Ward (11-3) will be in action, as will Michael “Venom” Page (8-0). The pair of welterweight’s opponents, as well as additional bouts will be announced shortly.

Tickets for “Bellator 144: Galvao vs. Dantas 2,” which start at just $25, are on sale now at Ticketmaster.com and the Mohegan Sun Arena box office. Doors for the event open at 6:00 p.m. ET local time, and the first contest takes place shortly after.

Undefeated to open his professional mixed martial arts career, Halsey looks to take back the middleweight title that he never lost. “Bull” was stripped of the title after a training camp injury hindered his ability to make weight prior to “Bellator 137: Halsey vs. Grove,” a fight that the 28-year-old went on to win in emphatic fashion. It’s worth noting that Halsey recently re-signed with Bellator MMA to an exclusive, multi-fight contract.

Carvalho entered his Bellator debut with Joe “Stitch Em’ Up” Schilling at “Bellator 136: Brooks vs. Jansen” as the underdog, but after a tightly contested bout, earned a split decision victory. The 29-year-old Rio de Janeiro resident has not tasted defeat since the opening contest of his 12-fight career and has only seen two of his wins go as far as the judges’ scorecards.