The Ultimate Fighting Championship is set to take on the 12th of December, 2020 at 10:00 pm ET. Fans are excited about this championship coming up soon! With two title fights, we’re still going to see cards. This December, we’ll see many interesting fights, including Junior Dos Santos vs Cyril Gane and Mackenzie Dern vs Virna Jandiroba. But the main event is D. Figueiredo vs. Brandon Moreno, the winner will get UFC Flyweight Championship Title. The co-main event will be between Tony Ferguson and Charles Oliveira. 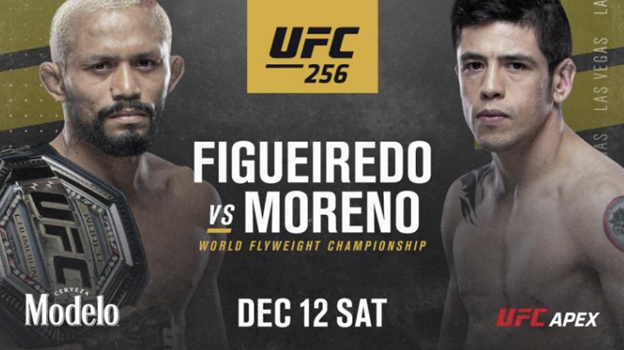 You don’t want to miss this fight if you are a fan of the sport. This review shows you everything you need to know about the championship. You’ll see the UFC betting odds, the card breakdown, and where you can watch UFC 256 live.

If you’re looking for a place to gamble while watching UFC 256, you’re on the right site. It is advised to read reviews before choosing the appropriate casino. We recommend you to read this review of Zodiac Casino $1 deposit. Zodiac casino is an ideal choice for online gamblers who want to play blackjack, video poker, video slots, roulette or other casino games. All you have to do is pay a $1 deposit and start playing.

If you’re looking forward to watching the championship, the prelim airs on ESPN. There will be 14 fights at UFC APEX Las Vegas, Nevada on December 12.

Here is the complete fight card:

Figueiredo will be defending his flyweight championship against Brandon Moreno. MMA odds opened with Figueiredo as a -300 favorite while Moreno comes back at +240.

27-year-old Mackenzie Dern is a Brazilian-American martial artist, and her style is Brazilian Jiu-Jitsu. She has been active since 2016. Out of 10 martial arts records, she has won 9 and lost only 1. Virna Jandiroba also specializes in Brazilian Jiu-Jitsu and has a black belt. She has been active since 2013 and will be fighting with Mackenzie Dern this season.

Tony Ferguson belongs to the Lightweight and Welterweight divisions. Having earned a black belt in 10th Planet Jiu-Jitsu under Eddie Bravo, Ferguson has a mixed martial arts career. This boosts his ability to defeat opponents during championships. Out of a total record of 29 fights, he has won 25. He lost 4 – 2 by decision, 1 by knockout, and 1 by submission. Oliveira is one of the best grapplers in the world and holds the UFC record for wins by submission with 14. According to MyBookie, the initial odds of winning UFC 256 are in favor of Tony Ferguson, with an implied probability of winning of 60%. 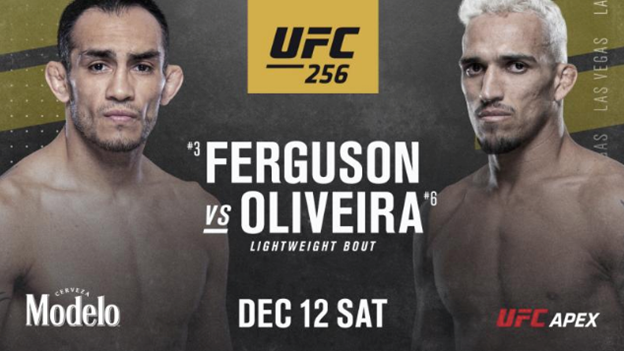 Get ready for fight night and follow all instructions about odds. Come December 12, expect Junior Dos Santos Almeida to bring with him in full force the ultimate win! He has a high record of UFC wins. Also, as of October 2020, his ranking is number 7. He is a Brazilian heavyweight champion who has always retained heavyweight titles in his entire career. But will he be able to defeat Cyril Gane, the 6 ft.5” fighter? Gane has records in both kickboxing and martial arts. He has never recorded any loss, so this may be an advantage to him.

One more place where you can gamble online is Yukon Gold casino. It is a reputable, safe and secure place with numerous games and bonuses. Thanks to this Yukon Gold casino review, you will find more information about the deposit and withdrawal methods, jackpots, registration and everything you need to start playing your favorite games. It is undoubtedly one of the best casinos you can find on the web.

There are times that bettors need to get information on how to be successful. It’s a normal feeling because no one wants to lose their bets. Information about odds is available on different websites. Certain statistics also show the betting history of previous games.

To be successful at betting during the championship, you have to know some important things. You must know how the fighter fought in the previous fights and in what form he is now. Also, read predictions from professional bettors online.

Bet on real money with UFC 256. This is a great chance for sports lovers. With details on betting strategies and predictions, you can have effective results. With correct reviews, you can have positive results for the championship.

Well, only the end of the fight will tell who would win and who will have to accept the defeat.

By Alex Behunin 48 mins ago