We’ve got a new heavyweight prospect to be excited about, and his name is Tom Aspinall.

Hailing from England, Aspinall attended his first UFC event back in 2007 while he was a teenager, UFC 70, as he watched his hero Michael Bisping defeat Matt Hamill from the stands that night. 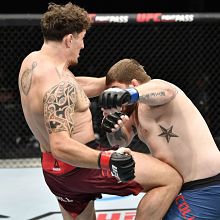 After a successful amateur run, and after going 7-2 on the regional circuit as a professional, having competed for BAMMA & Cage Warriors, Aspinall came over to the UFC in July of last year, and he’s quickly assumed a 3-0 record within the worlds leading promotion.

Aspinall first knocked out Jake Collier in 45 seconds with a vicious knee to the body, followed up by a barrage of punches. Next came a bout against Alan Baudot in October, who he also TKO’d in round one, this time in 95 seconds.

Baudot had only lost one fight prior, to Dalcha Lungiambula, who’s a straight up assassin himself. 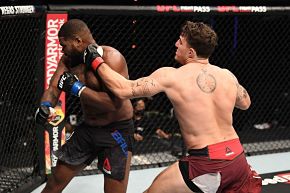 This was followed up this past weekend at UFC Vegas 19, by Aspinall facing former UFC heavyweight champion Andrei Arlovski, who he’d also watched from the stands that night at UFC 70. He hurt Arlovski badly early on, and followed it up with a barrage of about 25 punches, but was unable to finish the longtime top heavyweight.

Many of us were left thinking perhaps Aspinall had just blown his wad, especially considering how his first two UFC fights went, and considering he slowed down a bit afterward.

After two quick first-round finishes, he had to prove he could go further. He did that on Saturday, as he became just the second man to ever submit Arlovski, doing so at 1:09 of round two. 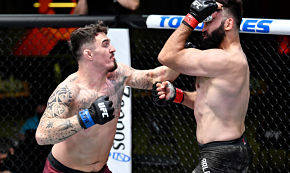 The only other man to ever submit Arlovski was highly regarded grappler Josh Barnett, who did so in 2016, also with a rear naked choke.

Arlovski may have over 50 fights, and Aspinall had just 11, but when he was getting winded, he slowed the fight down by tying up with Arlovski up against the fence. He showed a high fight IQ in there.

As good as Aspinall is on the feet; how quick he is, how accurate and precise he is, and with how much power he has, he’s a dangerous go for anyone. That doesn’t even touch on all the attacks he has in his arsenal. 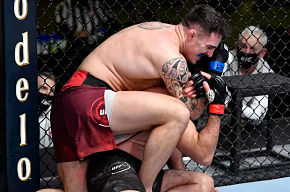 Now that he’s 3-0 inside the octagon and 10-2 as a professional, all ten victories via finish, what’s next for Tom Aspinall? There were three other heavyweight fights on the card at UFC Vegas 19.

Sergey Spivak looked incredible, securing the TKO victory at 4:32 of round two, the first fight of the night. That’d be a good match up for Aspinall, and Aspinall even called for this fight after his UFC debut. 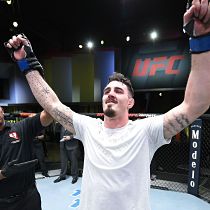 Spivak is now 12-2 as a professional, and he’s on a two-fight win streak.

Aspinall also said last night that he’d like to fight one of the fellow winners at UFC Vegas 19. Derrick Lewis doesn’t make much sense for him, being ranked in the top three, but Chris Daukaus also looked great last night, as he TKO’d Aleksei Oleinik at 1:55 of round one.

Daukaus also improved his UFC record to 3-0 on Saturday, all three via finish, and his overall record to 11-3. Pretty similar to Aspinall aye? Does this fight not sell itself? This is probably the best match up to make for both of these two up-and-coming talents.