UFC President Dana White joins Matt Serra and Jim Norton in the debut episode of UFC Unfiltered. The guys don’t hold back with the UFC’s boss, tackling a wide-range of topics. Here’s what you can listen to: 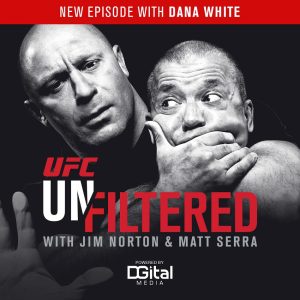 4:58 – Dana and Matt Serra talk about Michael Bisping’s championship win at UFC 199 and the biggest upsets in UFC history

9:11 – What happened behind the scenes between Bisping and Luke Rockhold after their fight

10:18 – Jim Norton asks Dana about Fedor Emelianenko – and if he will ever fight in the UFC

22:15 – the guys talk about UFC Ottawa and the reaction to MacDonald vs Thompson main event.

34:50 – Jim asks Dana about Donald Trump and the GOP convention

35:44 – The guys talk more about Ottawa and the Steve Bosse-Sean O’Connell fight

36:37 – Dana addresses Joanne Calderwood’s comments after her fight in Ottawa and a bonus coming her way

56:15 – Jim and Matt talk about what this podcast is all about

1:06:00 – what makes a spinning backfist work?
You can download every episode of the podcast on iTunes or Google Play.