Did we really think we’d already seen the best of Max Holloway?

It’s been about a week since Max Holloway defeated Calvin Kattar in the UFC Fight Island VII main event. We’ve had a little bit of time to digest what he did inside the octagon last weekend, and to imagine what could be next for him. 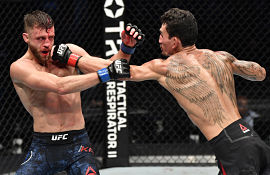 This performance has got many of us fans and media saying he just put on the best performance in UFC history.

Considering fights like Conor McGregor versus Eddie Alvarez and Renan Barao versus TJ Dillashaw I happened, that’s really saying something.

After opening his career up with a record of 20-3, he’d gone 1-3 in his last four, losing to Dustin Poirier for the second time in their rematch, and losing back-to-back outings to UFC featherweight champion Alexander Volkanovski.

Of course, Volkanovski is the one that took his belt from him back in December of 2019. The two had an immediate rematch, where most believe Holloway won, but it was a close fight, and he lost it via split decision, bringing his record from 20-3 to 21-6 in just 19 months. 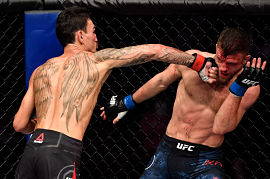 Having just turned 29-years-old, it’s a sure thing he could continue improving and getting better for the next three-plus years. But, when someone that’s that young wins the title, defends it three times, loses it, then loses the rematch controversially, it can mess with the fighters motivation.

He, and many others believe he should have the belt, but he doesn’t. We saw what this same exact thing did to Johny Hendricks. ‘Bigg Rigg’ challenged Georges St-Pierre for the welterweight strap back in 2013 and lost a very close split decision.

Hendricks then fought Robbie Lawler for the vacant title after GSP left it up for grabs and won the fight via unanimous decision. The two had an immediate rematch, considering Lawler had won two fights since their first, while Hendricks was rehabbing an injury, and Hendricks lost the fight via split decision. 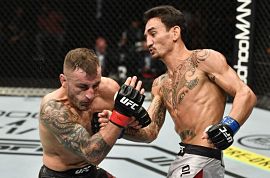 It was a very close bout, and once he lost the title, he wasn’t ever the same fighter again. It’s happened to others as well, but not Max Holloway. This kid still has every bit of motivation he ever had, and it’s great to see.

One thing’s for certain, there’s more than one Hawaiian prodigy.

In the Volkanovski rematch, Holloway started out incredibly fast in the first 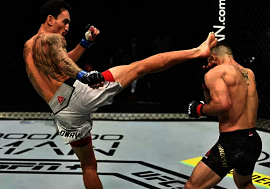 two rounds, and he hurt the champion twice in those two rounds; once with a vicious uppercut, and the other with a beautifully timed and placed head kick.

However, Volkanovski made the proper adjustments, making the last three rounds competitive, winning the last two.

The reason so many complain about this decision is because, though the last three rounds were close, Holloway did more in the first two than either of them did in the last three. This was quite an uncharacteristic start for Holloway; he’d usually start relatively slow, then pick up the pace more and more as the rounds, and minutes go on. 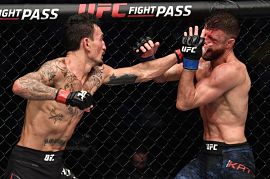 ‘Blessed’ didn’t do that in the Volkanovski rematch, he did the exact opposite, and it was worrying for Holloway fans. However, his performance last Saturday silenced all of us, he’s still the same fighter he always was, just a better version of it, like we’d hoped.

Holloway hurt Kattar a number of times throughout this fight as well, it’s incredible he wasn’t able to get him out of there. Kattar’s as tough as they come. So tough in fact, he ate 447 total strikes: 274 to the head, 117 to the body, and 54 to his legs. 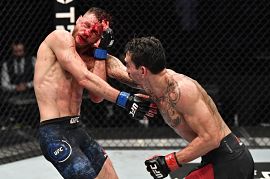 What’s more, Holloway threw a total of 746 strikes against Kattar, which is just insane, and only took 134 total strikes from Kattar himself. That is a considerable amount, but when you realize just how often he was in Kattar’s grill lighting him up, it’s not that surprising. 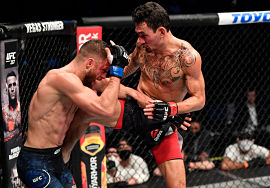 This victory put Holloway at No. 1 on the all-time strikes landed list as well, surpassing Georges St-Pierre, who had 2,591. Holloway now has 2,805 total strikes landed throughout his UFC career.

The way Holloway mixed his strikes up in this fight was just beautiful to see. Kattar’s one of the best pure boxers in the sport, and Holloway boxed him up throughout the fight. 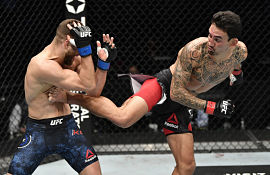 The volume and accuracy Holloway had on his punches, along with the fact that he’d use that oblique kick every time Kattar put weight on his front leg in order to throw, that’s what gave him this remarkable performance. Not to mention his spinning back kick to the body, which is certainly one of the best in the game.

‘Blessed’ didn’t let his three-inch reach disadvantage hinder him either, as he was there to hit Kattar without being there to be hit in return more often than not.

It’s insane how much Max Holloway has improved over the years. He’s always been a very technically sound talent, but as mentioned above, many of us thought we’d seen the best of him. 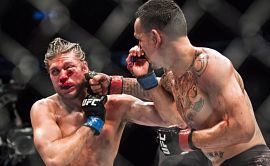 Obviously, Dustin Poirier put an end to his 13-fight win streak in their interim lightweight title fight. Holloway’s performance against former UFC lightweight champion Frankie Edgar wasn’t exactly a vintage performance of his, and then we have his two Volkanovski fights.

‘Blessed’ hadn’t looked quite like his normal self for four fights there. He didn’t look bad in the Poirier fight, he was merely out-sized, and obviously he looked good in the Volkanovski rematch, but it wasn’t quite the same Max we were used to seeing. He fell off as the fight went on. 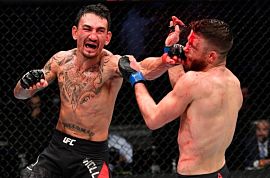 What’s really crazy about this, is that Kattar is certainly one of the very best featherweights on the planet, and Holloway went out there and made him look like No. 6, it was beautiful. This was a pissed off Max Holloway, it gave us the best version of him we’ve ever seen.

By Mike Pendleton 13 mins ago

By Adam Martin 50 mins ago